æhæd is a bit of an odd superhero. Subtle laws of physics change in his vicinity: solid objects gain superelasticity. This provides protection ("forcefields"); it also creates a womb-like sense of safety and resilience that numbs survival instincts ("mind control"). That's the scientific explanation. In a nutshell, his own very gullible personality is infectious.

æhæd: Original name (not compatible with most logins)

This is taken from the souvenir at the end of Arc 1144, where the alias Fairgo is used.. 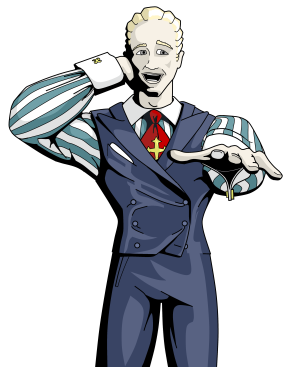 This letter reminds you of your recent adventure to the wilderness of Laos. Back when you joined the Rat Race to capture a rogue employee, Fairgo, who turned out to be a simple youth radiating a strange aura of innocence.

You traced Fairgo's past to an orphanage, then a hospital, and finally to Laos.

Following Fairgo to Laos, you learned he was found as an infant on the Plain of Jars, at the moment a landmine killed a young girl. The girl's parents adopted Fairgo, but gave him to mercenaries when he got too sick. Finding crystals in Fairgo's nervous system, the mercenaries had passed him to the Nictus, who in turn sent him to the Family-run orphanage.

While in Laos you found Fairgo's foster mother, defeated an astral Pha Xiong of the Tsoo, and stopped the Ratters (sent to kill Fairgo) from spreading any further. Most importantly of all, you opened a sealed jar on the Plains. Within it you found a still living, partially mummified woman who told you a tale before she passed away.

This tale has been translated to the best of Fairgo's ability, being spoken in both ancient Chinese and a vaguely familiar language from his childhood.

"Oh my, that's my arm? That's... not good. And you don't look like my usual guardian monks. But I sense kinship power with this boy. Let me tell you your story.

We were born in a village close by, a vast number of generations ago. We were part of a shaman dynasty within our tribe, interbreeding to strengthen our power to make others feel safe. These powers increased fifty-fold when one of our number was caught in a landslide, yet emerged alive two months later. We learned how to hibernate, until we were able to store our infants in stone jars for the future.

I was the first of those to be 'cycled'. Every three generations I would be awoken to tell of the tribe's history, and to listen to what had come to pass. Over the centuries we were invaded twice, first from the east and then from the north. They stole our people, and many of the jars, rolling them down the hillsides to provide water along their trade route. A small group kept us in hiding. After forty-one awakenings I was told of a great sage in the north who I should meet.

On the way I found other people now had our power, a common but dilute quality of humankind. Some had made slight gains through meditation, and even through tattooing powdered jar into the skin.

I served Confucius, masquerading as a man, and was known as disciple 'Zuo Quiming', or Ancient Worthy. I wrote for his library for many years, until he grew very old. He then granted me permission to return to my homeland. With just a few faithful servants, I did my best to preserve myself alongside you, in the last of the jars. Judging from my decay, I did not do enough.

Son, it was your destiny, to record the passing generations long after my life had passed. But now people can write, there is no need. Live well once."

Airhead's Pagkagising adventure: A 'blow by blow' account of Airhead's trip through this martial arts trial simulation. Contains spoilers - please play the arc yourself before reading this. The story explains how Airhead's power of mass-naivety is used to "defeat" his enemies.