After a short while on the Screenshots and Fan Art Forum, I met Dragonberry and Starchasm, two members of the Teen Squadron. They were always talking about teaming together, so I thought to myself, "Ooo, I wanna' be with the cool kids!" So, I ventured into the long heard of lands of Virtue, taking a retired character from Pinnacle, one 'A C', and used him as a model for Air Conditioning. Shortly after, he became a proud member of the Teen Squadron, fighting along side Virtue's finest. And thus, my friends, Air Conditioning was born. 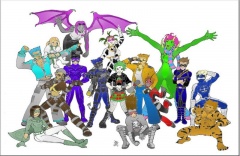 Air Conditioning and members of the Teen Squadron

Air Conditioning is a member of the Teen Squadron and works for Freedom Corps.

New to America, Air Conditioning, known to his friends and family as Diego Chavez, is generally quite shy, including when around his friends of the Teen Squadron. He speaks when he needs to, often reverting into his own language when nervous or excited, and asking questions when they arise. When battling villains, he tends to follow not lead, prefering the instruction of those who he believes to be a better, more experienced hero. While in battle however, he forgets his bashful demeanor, charging into the thick of the fight, fighting alongside the Scrappers and Tankers. If he is found in conversation, he holds uncommon respect for the opposite sex and his elders, as he was raised to show politeness towards these groups as a child.

While taking his immigration exam, the doctor noticed something odd about him during the routine, usually mundane illness check. He referred him to another doctor, one more knowledgable in his field. At this examination, they discovered he had somehow acquired an extra chromosome in the womb without having any physical mutations. Instead, this unwanted chromosome allowed him the access to powers.

The extra chromosome present in Diego's DNA allows him to freeze water molecules around him, clustering them together, and projecting them as shards of ice. Currently, he is still learning how to better control his power, allowing him to sheet floors with ice, freeze foes in blocks of it, and even create a swirling field of shards around his person.

Freezing water molecules under his feet, he is able to "slide on air". The molecules are close to invisible to the naked eye, giving him the appearance that he travels using a super jump ability.

Because of his family's limited income, Diego's mother is constantly at work in Wentworth's, managing and recording items sold and put up for bid. She is constantly away from the house, creating a situation where Air Conditioning must provide for his two younger sisters by himself. Because of this, he has learned to mature much faster, looking out for little ones that may be fighting crime with his team. By the age of 18, Diego has already mastered most skills of parenting.

Coming from Mexico, Diego knows both Spanish and English. This allows him to communicate with a wider array of contacts and allies than a normal hero would be able to. Diego is also able to use this advantage to keep information private from certain people when in a public environment.

Because Air Conditioning draws his power from the moisture in the air around him, he has a hard time projecting his blasts in dry environments, such as deserts, climate-controlled labs, and experimental testing facilities. Also, he does not speak English 100% fluently, making it hard to communicate with some more educated civilians and heroes. He has two sisters at home that need caring for, so he must often cut his hero'ing time short to watch over his siblings.

Air Conditioning wears lenses that heighten his reflexes and agility, allowing him to dodge some attacks.

Born a mutant, Diego's powers, not even known about until recently, didn't fully evolve until he had moved to the United States. They came about from an excess chromosome which he required in a freak occurence. No one is sure how the chromosome formed, as only 23 each are given from the father and mother. While taking his routine physical before entering the United States, the doctor checking him found something unusual, however he couldn't place his finger on it. He passed him off to a doctor of genetics and an all-around more knowledgeable, more experienced man, who discovered his 47th chromosome.

(Spoilers) This medical phenomena caught the attention of a Crey spy, who was working as an assistant for the doctor, for his patients often turned out to be supers. The Crey agent alerted the Countess, who made an order to keep careful tabs on Mr. Chavez. Awhile later, after taking a sample of blood found on a Cryobot after an encounter with Air Conditioning, Crey discovered that the extra chromosome must have been present in past generations, and was a clone of sorts, and with the extra genes, that had no use, evolved over the centuries into the powers AC wields.