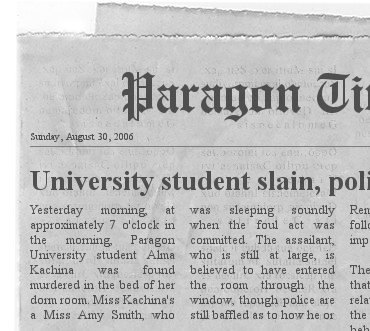 The only daughter in a large farming family, Alma was determined from a young age to rise beyond her roots. She worked hard, doing her best to balance school with her chores, often staying up late by the light of a candle, forgoing sleep to study. Luckily, her efforts payed off, and shortly after her eighteenth birthday, she entered Paragon University. For a while, everything seemed great... she made enough waiting tables to scrape by, and her studies were going well... Until one day, just a week before chrismas break, her roommate awoke to find Alma dead, murdered silently during the night. Despite their best efforts, the police were unable to find any leads, and the case was eventually closed, the Paragon U class of 1933 left with one less member. Alma's death took place in December of 1929. Even she knew not what happened, her killer had been too quiet for her to even awaken before she felt his blade in her chest. For the next 79 years, her ghost wandered the campus, silently observing the other students. All attempts on her part to make contact with the students around her failed, and even the occasional hero who wandered through seemed unable to detect her presence. Recently, however, during the end of the 2008 fall semester, there was an incident in one of the labs on campus, involving a crystal that had once been in the possession of the circle of thorns. Alma was idly observing the experiment at the time, standing just feet from the crystal in the test chamber that the scientists had sealed it in. Despite the high amount of cation they were exhibiting, she was not particularly concerned, having failed in her 79 years of undeath to discover anything capable of harming her ghostly form. When she leaned forward to tap the crystal curiously, however, her touch, combined with whatever energy the scientists were running through it, caused some sort of reaction. The crystal exploded in a burst of magical energy, throwing her, much to her surprise, against the wall of the test chamber. Even more surprising, however, was the reaction of the scientists as they entered the lab, staring in surprise at the broken crystal, and it seemed... her. In shock over what had just happened and her sudden viability, Alma fled the lab. Eventually managing to calm down, she spent several days wandering the campus in confusion, but, no matter where she went, one thing was clear... people could see her again.

After some experimentation, Alma has managed to gain some understanding of her new existence, although she still has more questions then answers. Although visible to those around her, and able to interact with them, she seems to have little in the way of mass, and can lapse back into her old ghostly form with little effort. More worryingly, it seems that whatever happened in that lab, by itself, was only a temporary fix for her condition. Having encountered several magic shops as she wanders the city at large, Alma has discovered that she has a craving, a need, for arcane energy. Worse, if she goes more then several days without any exposure to magic of some sort, she finds herself beginning to fade, her form becoming less visible and corporal the longer she goes without. Although an influx of the arcane easily fixes the problem, she does not know, and has no intention of finding out, what would happen if she would allow herself to fade completely. Most worrying, however, is that her need to absorb magic does not provide her with any protection from the effects of spells directed at her... on the contrary, she seems especially vulnerable to such powers, and the spells of the circle of thorns, as well as other magic users who specialize in the ghostly and the undead, seem to be especially dangerous to her.