My initial thoughts upon creating Amythyst weren't particularly deep. She was the first character I ever created in CoH, so my initial aim for her was not RP. However, over the years I've developed her character into something that defies explanation sometimes. So please, if you are confused about anything, don't hesitate to ask. I'm a very friendly person, and I'm always up for RP.

Please note: I KNOW how "amethyst" is spelled, thank you very much.

Amythyst's childhood was far from ordinary. Her father, Amaru Masamoto, was an esteemed scientist employed by the Erementojin in Japan. The organization funded his metahuman research program, a branch of which included the experimentation of creating metahumans through genetic modification. Lab rats can only help so much, however, and after learning that his wife was pregnant with twins, it was decided that his daughters would be the subject of their first human experiments. Amythyst, unfortunately, was the only success. She was pushed to train as hard as she could to become a hero, while her sister Jade was left to her own devices. However, living in the constant shadow of what you could have been tends to warp the fragile mind of a little girl. Jade made a fateful deal with the Circle of Thorns, and vowed to devote her life to destroying Amythyst's. Jade's triumphant climax left Amythyst's mind completely wiped of everything she ever was.

Amythyst woke up on an amphitheater bench in Perez Park, bruised, bleeding, and with nothing but the clothes on her back and a cat sleeping on her head. She was like an infant, her mind broken, and she was found by the PPD and placed in the care of a half-dragon hero. He retaught her as he would a child, and guided her through her relearning of the most basic concepts. He loved and taught her diligently until he was banished to the Rogue Isles.

Amy's villainous taste was solidified a year later when she fell in love with Masume Yasuda (Mr. Yasuda.) She embraced her evil side for a short stint in the Isles in order to be with Masume, but it was a rather short-lived relationship. She remained on the evil side for a short while, breaking into every police department she could think of in search of any information about her past.

Amythyst met Yuukaida Kore, and rejoined the ranks of the capes to train with him. They have been together for half a year now, and have recently returned to the Rogue Isles in search of her sister Jade, seeking answers and revenge. The wings she was cursed with after a run-in with the Circle of Thorns had to be sawed off for this endeavor, leaving her with two terrible scars on her shoulderblades.

Amythyst is easy to get along with, as long as you're on her good side. Her friends enjoy a bubbly girl who can always find something to laugh about. She's been known to crack jokes in the heat of the hardest battles. However, don't get on her bad side. She seems to have inherited her sister's tendency toward cruel behavior toward those she deems deserving, and can bring even the most hardened villains to tears.

Starry is the small black cat that rides around on Amy's left shoulder. Her purpose with Amythyst is yet unknown, but she's an undeniably tough little cat. Despite Amy's multiple attempts, Starry simply will not die, but seems entirely too protective of Amy for her own good.

Amythst's powers are drawn from sexual energies. Much like a succubus, Amythyst stores up energy to be used and manipulated later to her will. However, Yuukaida rechanneled her chi through empowered tattoos on her back, and she no longer requires this energy simply to keep her functioning in the most basic ways.

Amythyst wields a silver mace as her only means of defense. She prefers to absorb damage rather than deal it, but her weapon packs quite a punch. One swipe has been known to daze enemies and send them running. Her uncanny ability to trash talk has also given her quite an effective taunting skill. Bash, Jawbreaker, Clobber, Whirling Mace, Shatter, Taunt, Build Up

Amythyst is able to focus her energies into the very earth around her, gathering the rock into a thick protective armor around her body. Rock Armor, Stone Skin, Earth's Embrace, Rooted, Brimstone Armor, Crystal Armor, Minerals

Amythyst channels her chi into a singular focus beneath her body, and propels herself through the air thusly. Air Superiority, Fly 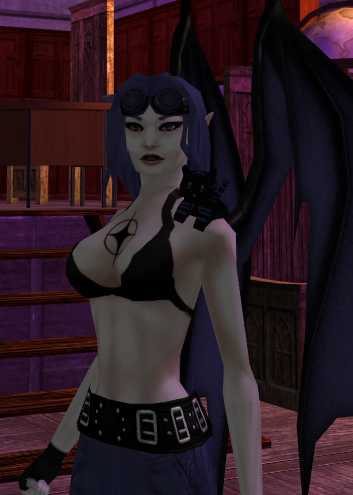 Amy chilling in the Dawn's Awakening supergroup base.

Amythyst founded this supergroup for her and her companions. As of yet, they are still in the process of building a functioning base. Interested parties should contact her directly though whisper or e-mail.

Super Rad - The second in command of Dawn's Awakening.