((Constructive suggestions are welcome on my setup here))

In an early age of man; in a land, the name of which is lost to antiquity, an angel came to earth to watch over man: A grigori. Most of the grigori fell in love with the daughters of Eve and were cast out of heaven, this grigori fell in love not with a human, but with the idea of humanity.

In the guise of a man, the grigori helped the humans of the land he was watching, doing all he could to ease their burdens; the humans, in turn, were very thankful of it and praised him. They called him their angel, even though they knew not his true form. Time, however, plays cruel tricks and brings changes that are not always welcome. As the years passed, the angel began to feel pride. Pride for what he was doing, pride that brought him to feel over-confident in the execution of his cause and worst of all, pride in himself. His pride and over-confidence blinded him and he began to inadvertently harm those he intended to help. His good deeds became good intentions, and when harm or misfortune replaced help and good will, all he could say was that he had meant well. Good intentions and meaning well could not heal the harm the angel had done, though, and the people who had once loved and praised him began to hate and slander him. It wasn't long before the embittered peoples began gathering in secret to voice their discontent to each other, reinforce their hatred, and find focus for it.

All of this went unnoticed by the angel, his world was rose-tinted and everyone still loved and praised him. Even when the people castigated and shouted at him, he was oblivious; he would smile and continue trying to help as if nothing was wrong. His clouded world was soon cleared, though, when the mob formed and their combined hatred shone like a fiery celestial beacon. It was so bright and so hot that it burned away his human façade and cast a long, cold shadow behind him. The angel's shadow did not leap or flicker as a shadow normally does; instead, it did something that no shadow had ever done.

It stood behind the angel and pulled his flaming sword from its sheath. Feeling his sword stolen, the grigori spun around just in time to be run through with it. The Shadow destroyed the angel's entire existance, then turned on the people who had come with the intention of doing just the same.

The people fled, but they could not run from the shadow. Fire rained down from the heavens and cold winds cut through them like a knife. The few who managed to escape told tales of an Angel's Silhouette, a horrible creature that burned with hatred and froze the souls of anyone unfortunate enough to be in its path.

Through the millenia, the entity known as Angel Silhouette has changed from a being of pure hatred; finding a state of calm unlike no other. It is a most serene and happy creature, even when facing the destruction of its physical form; a walking dichotomy because it thrives on the negative emotions of humans. It has been surmised that this is because there is no need for it to put forth any effort to create negativity, that humans do more than it ever could.

It is, however, a creature of brutal honesty, never hiding what it believes to be its only purpose; to, sooner or later, destroy the souls of all entities, living, dead and ethereal.

I am trying to create a storyline that allows it to break free of its purpose and, in reference to the end of the back story link below, allow it to free itself from the chains and ascend to become the very angel it destroyed.

I really can't think of any way to do this other than for it to develop a love or fondness for the souls it intends to obliterate. The only problem with this is that it would involve a heavy RP from the player or players who is or are trying to befriend the Angel Silhouette as it has a very cold personality that sees no need for friendship or personal involvement. If anyone would like to suggest, in the discussion page, a storyline idea for that I would be happy to consider it.

The Flames of Hatred 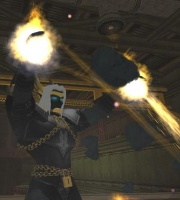 Though the shadow has calmed, the flames of hatred that helped to create it still seeth and erupt at its beck and call.

From its hands, the shadow can cast flaming missiles of varying intensity; from tiny flares launched in rapid succession to great balls of fire that explode on impact to focused beams of flame with impossible range.

The Angel Silhouette can call upon the storms of man's hatred to rain down fire and brimstone upon his foes.

If the shadow finds an acceptable opportunity, it can call forth an eruption of hatred so intense, that it will completely burn away the physical vessels of every soul nearby that it intends to capture. This, however, leaves the shadow drained of energy and forces it to withdraw from battle in order to channel more power from the negative emotion that permeates the earth. 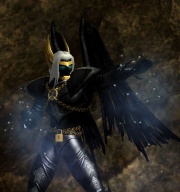 The shadow that fell behind the angel was cold; cold from the bitterness the people felt towards the grigori. That cold is the core of the entity called Angel Silhoutte, and it can call upon it just as easily as it can the Flames of Hatred.

The shadow can project an icy blast and embrace an individual soul with a chilling grip, causing it to slow and weaken. This, in turn, can transmit those affects to the living vessel in which the soul resides.

This power takes infrigidation to an extreme; the weakness instilled by the cold affects everything the soul and vessel does, and even the potency of its powers, should it have any.

An individual soul can be afflicted with a cold so frigid that it cuts through not only the living vessel, but the living vessels of all souls close by. The cold manifests itself as a snow storm centered around the living vessel whose soul this was cast upon and brings a lethargy to all nearby.

The Angel's Silhouette can call forth man's bitterness and indifference in the form of a freezing rain so cold that coats everything in the area with a thin layer of ice. As the ground freezes, it becomes difficult for his foes to keep their feet; and as his intended victims ice up, their movement is slowed to a snails pace. The rain carries with it another danger as shards of ice fall from the sky, slicing into the flesh of any soul unfortunate enough to gain his attentions.

The shadow can infuse any desired soul with a cold so numbing that it will affect all of the souls around it. This ethereal cold is so intense that it begins to affect the physical bodies of any souls it has not chosen to protect, causing them to shed all of their body heat. Their body heat can be absorbed by the shadow and its chosen colleagues and is used to invigorate them and give them a boost of energy to fight longer before feeling tired. For as long as the effect lasts, the targets are unable to recover their stamina and they shiver so badly that it is difficult for them to move any faster than a shamble.

Allies of the Angel Silhouette can have their souls encased within a protective, icy cage. This manifests itself in the material plane as an icy shell around the living vessel that carries the protected soul.

The Angel Silhouette can capture any nearby souls and bring them to itself in the blink of an eye. Usually used to capture souls as they escape a dying vessel, the shadow can also call forth the souls of his allies, bringing with them their physical form.

As it was cast down from Heaven, its wings were bound to its body by the same golden chains that bound it to the material plane, replacing them with a simple cape. As it regained its lost power it found it could force its wings out of their bindings; though, at times, they still appear burnt from his fall to earth. Its wings are not necessary for it to fly, they are a vestige of the times when Angels appeared to man with wings to show their divinity.

Speaking the entity's true name will render it helpless and vulnerable; though even if its physical form is destroyed, it will simply re-manifest itself in another part of the world.

Very little is known about this being; what is known is not fully understood.

I am classifying it as male, as that is what it appears to be, but it is completely androgynous; neither male or female, only shadow.

The being is approachable by anyone, no matter what their moral lean is, and will speak freely about anything and everything. An interview with it in Pocket D has left me shaken and a bit depressed.

It believes itself to be the shadow of an angel it killed with his own sword. Created by the fires of hatred, but with a core that is a cold, bottomless void. According to the shadow, it receives its power from simple negative emotions: Anger, hatred, jealousy, sadness, etc. It is bound to the material plane by the golden chains that wrap its body, but it feels confident that with the increasing human population and unrest, it will soon have the power to break free of its chains and fulfill its purpose.

Apart from its eyes, its purpose is what frightens me the most. Its goal is to destroy all souls; all souls on earth, in heaven, and in hell, then itself. This, in itself, is a ridiculous claim; if anyone else were to say what it had, it would be laughable. Looking into its eyes, though, makes it hard to disbelieve. Looking into them gave me a feeling of vertigo, as if I were falling towards it; I made mention of this and it told me that my soul were simply yearning for destruction, that it was trying to leave my body to vanish into the oblivion that was inside of it. It was at this point I ended the interview and have now passed the assignment on to another.

Just some cheesecake shots I took on test of Angel in his Roman attire. ^___^

Me playing around with the Hero Generator :p 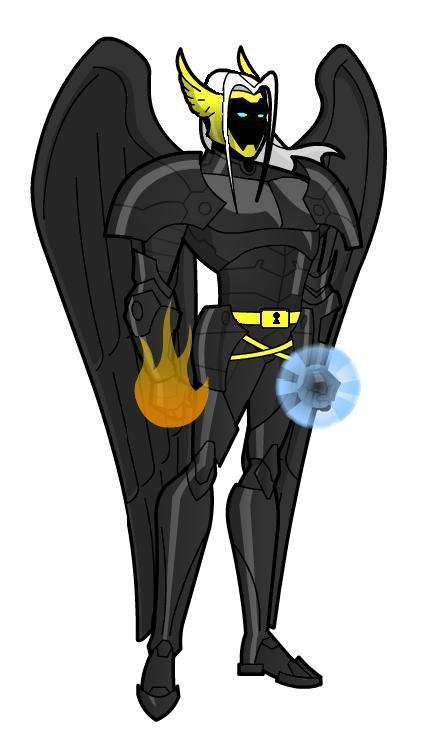