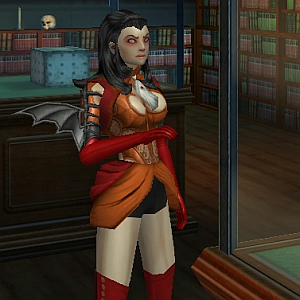 And at the last from inner Egypt came
The strange dark One to whom the fellahs bowed;
Silent and lean and cryptically proud,
And wrapped in fabrics red as sunset flame.
-- Fungi from Yuggoth, XXI. "Nyarlathotep"

Niara lived with her mother in [redacted], an only child going to school and being unremarkable, unaware of power or destiny. By the time she'd started high school, the dreariness of her hometown went beyond systemic: The drab palettes of wallpaper, clothes, and personality were all symptoms of an alien entity sapping the fabric of reality itself. They were called the Colorless. [...]

She apathetically fought the Colorless for over a year, seeing no gains, no progress, only the constant advancement and entrenchment into daily life. In her normal life, she was forced to pretend she was one of them.

An amorphous hivemind that lurks on the edge of space, reaching into all realities at once. [...]

The Colorless is named as such for its affect on tangible beings: As it takes hold, the invaded object loses its perceptible color, as well as its independent mind.