Another's Damnation is a mysterious figure who has recently arisen in the Rogue Isles and taken command of a previously defunct Chaos cult. Her powers are based on Warhammer 40,000.

Where the fiendish Chaos sorceress known only as Another's Damnation came from or who she is was completely unknown until recently. She appeared in the Isles a matter of months ago and began gathering followers. She quickly rallied dozens of lost souls, thugs, disenchanted Circle cultists, and occultists to her side. With these followers assmbled she proceeded to seek out the Chaos cult known as the Hands of Change. The Hands had originally been founded by the Chaos Sorceror Keltros, but as Keltros was defeated and disgraced it had fallen into obscurity. The few remaining members, kept together by the hooded psyker Joseph, had mostly commited minor crimes and kept an eye on thier ailing master.

This all changed with the arrival of Another's Damnation. She spoke to Joseph and immediately took control of the Hands of Change, renaming them the Fell Hands. Some of her closest speak of a confrontation between her and Keltros, but the Chaos Marine has remained quiet as she takes over the cult he built.

The Hands have since begun mass recruitment under the command of Joseph, and Damnation has set off into the Rogue Isles with a retinue of chosen cultists at her side. She speaks of building her power, but her long-term goals are unknown.

Recently Damnation set in motion a full-scale plan in which she took conteol of small elements of the PPD and Circle of Thorns, using them to separate and lure the members of the Paragon Youth Corps into a trap. After capturing Psykera, Silencer Micheal, Gothic Defender, and Assembled Girl, she revealed herself as the elven warlock Nayla, the Youth Corps' old nemesis, thought banished. She prepared to excecute Micheal, Defender, and Assembled Girl, while imprisoning and torturing Psykera. However, a mysterious servant of Chaos named Elynks Argoth intervened and alerted Arachnos to the Hands' activities. An Arachnos assault force struck the Hand base on one of the border Rogue Isles. They caused enough damage for Elynks to free the Youth Corps members except for Psykera. Nayla and her retinue attacked the party just as they escaped, and Nayla personally killed Elynks. The Youth Corps managed to defeat Nayla, but before they could finish her Joseph arrived with reinforcements. He slaughtered the Arachnos forces, but his men were attacked and destroyed by Major Hellsborough.

Joseph and Nayla managed to escape. 90% of the Hands are now dead, though they are slowly returning to strength. In the wake of her revealed identity Nayla has renamed the Hands the Blooded.

Damnation has let precious little of herself show during her time in the Isles, except perhaps to her most trusted lieutenants. She is merciless and fully willing to send her cultists to thier deaths, though she does not let them die needlessly. Damnation has little tolerance for those she percives as benath her. She will show loyalty to those who prove themselves intellectually or in battle. Damnation also has a proven dislike of technology, tolerating little more than the guns her men use and other useful items such as communicators.

Another's Damnation is a dangerously powerful Chaos sorceress. She can rip reality open and channel the unleashed energy into all manner of effects, including casting a shroud of darkness over her enemies to cloud thier vision, ripping the life force from them to restore herself and her allies, and turning the ground to an unholy tar to hinder and weaken foes. She will even open her mind and show her enemies a glimpse of the abyss to leave them trembling in horror. Damnation is always surrounded by a shroud of darkness that hides her and her allies from view and absorbs some attacks. When she walks she stains the very ground with a Warp taint for a few seconds.

Like all Chaos sorcerers Damnation is psychic, though to what degree is uncertain. At the least she is mildly telepathic, able to read thoughts and speak with her mind, at the most her hold over the Fell Hands is nothing short of mind control.

Damnation can use the power of her mind to fly and does so whenever possible. 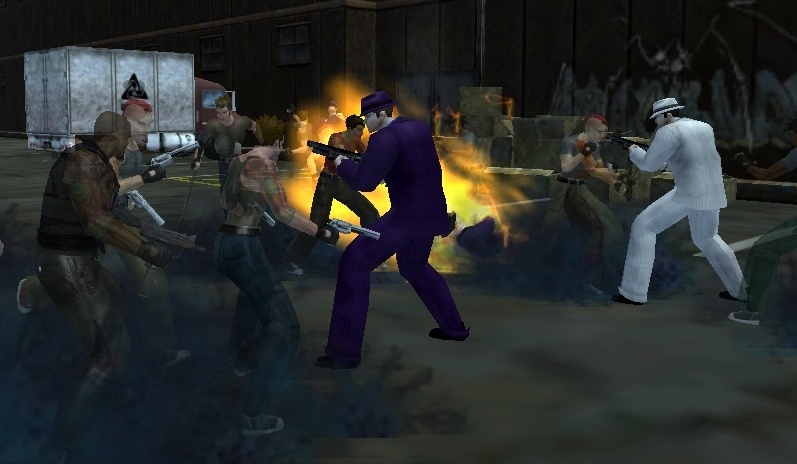 A horde of Blooded, lead by Lt. Samen, overrun a group of Family

Armed with pistols, stolen Arachnos rifles, shotguns, Uzis, submachine guns, knives, hammers, axes, even a rusty .30 machine gun or M60, the Blooded are a ragtag, pathetic fighting force with a sole advantage of numbers. At least at first glance. In combat they fight like zealots, ignoring wounds until they are dead and fighting until the last. Many the overconfident Arachnos or Council officer has found his plans crumbling under the unbreakable morale of these devotees of Chaos. Another's Damnation maintains a small personal retinue of Blooded, while the greater body of cultists remains at her back and call during an emergency.

After she took over the cult, Damnation officially shifted its focus to a cult of Chaos Undivided, rather than the Weaver of Fates Tzeentch alone.

Damnation does not value individual Blooded (other than her lieutenants) but her retinue maintains a set of key positions at any time. Each position is occupied by a Blooded who fits the position's characteristics. 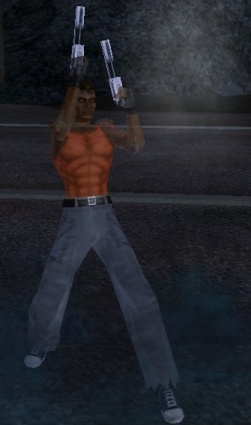 The Fanatic is the preacher, the true devotee, the spreader of the word of Chaos. Only the most devout cultists fill this position, and during battle the Fanatic can often be heard roaring the praises of the Dark Gods and yelling battlecries. 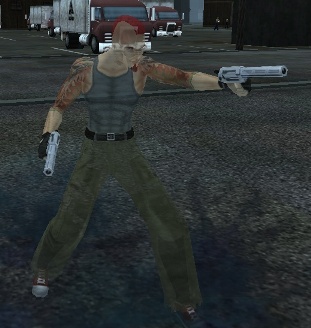 The Cultist is the standard soldier of the Blooded. Issued above-average weaponry as a member of Damnation's retinue, his job is to prove himself to his mistress. Most Blooded are capable of filling this role. 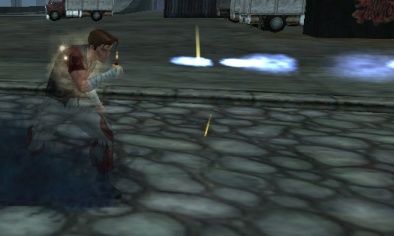 Another's Damnation knows of and respects the power of fire, both at dealing damage and psychologically. Unable to conjure fire herself, she ensures that a specialist in the element is present in her retinue at all times. An ex-arsonist, a cultist knowing minor fire spells, or just a man who knows how fire works can be a Pyromaniac. Armed with Molotov Cocktails, matches, lighters, or even scavenged flamethrowers, the Pyromaniac's role is to rain firey death on the enemy in the name of the Dark Gods. 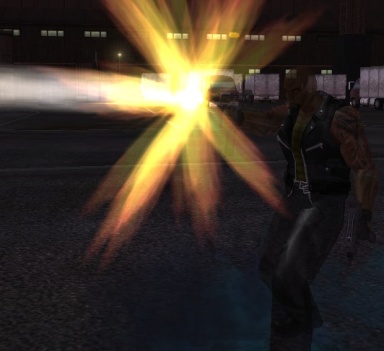 Ekkad Samen is one of Damnation's most trusted lieutenants, and his authority in the Fell Hands is second only to Joseph Elentren himself. Samen was a simple street thug until his gang got in a fight with Damnation's men, early after her arrival in the Isles. Samen's gang was sadly outmatched by the zealous cultists and the evil sorceress, and he was very quickly the only one left alive. Meeting Damnation's gaze and seeing the power Chaos offered, Samen pledged himself to her, and his expertise in leading men has proven invaluable to Damnation.

Lt. Feilch is a man shrouded in mystery. Unlike his counterpart Samen, Lt. Jerdan Fielch's past is not widely known. Fielch is the opposite of Samen in nearly every way. Where Samen is a thug Fielch is a soldier. Where Samen is brutal, Fielch is cold and calculating.

He was once a U.S. commando, and surprisingly a devout one. Fielch remained a staunch Christian for most of his career. At one point his unit was gathered with a number of other commando and mercenary units to attack an Arachnos installation. The attackers took horrendous casulties on the way in, and as Fielch lost more and more of his team and penetrated deeper into the installation, seeing the terrible things Arachnos did, his faith hung by a thread. At last a Tarantula Queen destroyed his squad, throwing him over the edge of the installation platform and into the sea below.

He washed up on a beach in Port Oakes, dying and godless. Another's Damnation found him and had him returned to health. As he healed she showed him Chaos, and he has followed her loyally ever since.

Who the cultist that once inhabited this body was, no one knows. But his form is now the vessel for a great and powerful daemon, who is known only as Xraxn'mll. The human body has been bloated, muscles swelling to a grotesque size as it expands to contain the daemon's power. Xraxn'mll's only loyalty is to Damnation, and in battle he rampages through the ranks of the enemy, shrugging off almost any attack and smashing his foes with blows of his massive fists.

One of the things Damnation brought with her is a powerful battleaxe. The axe is inhabited by a daemon named G'zhakl, a terrible creature whose full name cannot be uttered, nor can his full power be unleashed. Damnation wields this axe in battle, though her physical power is nowhere near enough to lift it. The daemon moves for her, guiding the blade to the target. G'zhakl is a haughty creature and his edge has no special or ill effects or normal beings, but when confronted with spirits, other daemons, or the undead, the blade will awaken and rip great chunks of energy from them, causing huge damage.