Arachnos Agent stood next to a large, open window in a run-down flop house on Mercy Island. The air blowing into the room smelled stale and heavy. The room was covered in peeling wallpaper and had yellowed to the point there was no discernable pattern. His head cocked to one side as he confusedly repeated what Pierre-Louis Lefèvre had just asked him.

The agent leveled a steely gaze to Pierre-Louis' eyes, his voice cold, "You ask me why?"

The Agent's gaze shifted from the Frenchman out the window. It was overlooking a beach, now stained with blood as the dawning sun crept over the horizon through fog and haze as a hunter-red, pale and ghastly mirror of the corpses below.

"In some ways, it started in 1909, Pierre-Louis. The essential elements of that poetry were courage, audacity and revolt." He stared straight ahead as if attempting to see into eternity as he continued, "That is when Marinetti wrote the Futurist Manifesto. And then in 1919, a manifesto written by Combattimento furthered the ideology." He leveled his gaze back to Lefèvre, disgust obvious in his eyes. "But I doubt you have read them, let alone are aware of them."

Shaking his head, he turned his attention back to the blooded sun. "Those weren't really where the ideology started, but they were part of the beginning."

The Agent's composure changed slightly as he continued, staring out at the bloodied beach. A tone of revererence, only seen in a man speaking of something sacred, crept into his voice. "It was sometime between the World Wars that Recluse perceived the way... a better world. Beauty exists only in struggle. There is no masterpiece that has not an aggressive character. Poetry must be a violent assault on the forces of the unknown, to force them to bow before man."

His gaze was now a thousand miles away, as if looking across the blue sea that separated blood-red sun and bloodstained sand, finding some promised land that was almost palpable enough to reach out and touch.

"That is why, Pierre-Louis. Did you believe? No. You did not." He returned his hardened gaze to the Frenchman, shaking his head as if scolding a child and explaining what the child had done wrong.

"There are invaders in our island, Pierre-Louis. You chose a side in the battle. The *wrong* side. You cling to a faded past and outdated values. We must turn our sights to the future, Frenchman, not the past... To admire an old picture is to pour our sensibilities into a funeral urn instead of casting it forward with violent spurts of creation and action."

"Do you want to waste the best part of your strength in a useless admiration of the past, from which you will emerge exhausted, diminished and trampled on?" he asked, as his gaze seemed to penetrate right through the Frenchman.

The Frenchman did not answer, and the Agent returned his gaze to Lefèvre, a pool of blood, flesh and bone scattered behind the man led up to half a face silently staring back at him.

The Agent's visage changed again, becoming hard as stone as he uttered a whispered snarl, "Someday it will be glorious. But we shall not be there, Frenchman, I know that. But until that day I will be found standing on the world's summit as we relentlessly launch our insolent challenge to the stars."

With that the Agent turned with military precision and walked, as if on parade, out of the small apartment. 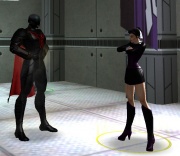 Arachnos Agent with Vangaurd colors having a discussion with Lady Grey. Note while not seen in this photo the back of his cape still displays the Arachnos symbol.

Dour, gruff, hard-faced, grimly and stubbornly determined. He speaks very few words; those he does are usually barked orders. He will kill without hesitation to achieve his goals, however, he never takes any enjoyment from the act. Simply put he is a monster. He is aware and accepting of what he is; he sees his actions as necessary to achieve the glorious goals of Lord Recluse.

Equipped with various traps, devices, and gadgets. He has been seen to use everything from web grenades, caltrops, trip mines, and even at times a portable force field generator.

Arachnos Agent is a highly trained soldier and battlefield commander. In addition he is equally proficient solo while engaged in "wet work", infiltraion, and espionage operations.

Once favored by Lord Recluse, this Agent was captured in Paragon while on a mission. Later, he was discovered in the Zig by Arachnos while they were liberating a different prisoner. Arachnos' forces liberated him back to the Rogue Isles where he has been struggling to once again become Recluse's most favored Agent.