"The world is naive! The irony is that it's the fear of creatures like me that cause me to exist. I come from the realm of nightmares and loss! Of fear and hatred! You contradict yourself to deny me my existence! Days of man will come to an end. I will sow the seeds of an army through you all and summon them to this world just as I was. And you, Mr. Amazo, ask me why I'm doing this!? You should know. You ALL should know. I AM your creation." - Arcanthos, and the killing of Mr. Amazo

Court of the Fey

The Fey are timeless beings living on many planes of existence. They war, bicker, and pull political strings just as human society does. They know all emotions and all wonders, and most say their feelings are many times more intense than any human emotions, which may be the cause of their insanity. It is thought that most fey can feel only one emotion. While human nature has us experience many different things with attitudes and feelings to adjust; fey are one-sided. They can not change. A fey of hate can never love. And a fey of worry can never be calm. This is just their way.

One of the worlds of the fey, the Dreamlands, is at constant war. The Courts gather from like-minded creatures that live in this realm to battle the other Courts. Each always vying for dominance. But no side ever gains any ground, and all are in a constant state of stalemate.

At the Ceremony of Ascension, occuring shortly after Arcanthos' creation, a cool wind filled the room. All looked on in curiousity as a bright light consumed Arcanthos before he could take his destined powers. An explosion of magical energies burst forth from Arcanthos shortly afterwards. When the atmosphere died down, the Lord of Winter was infuriated to see that Arcanthos was no where to be found. He ordered his servants to search his entire realm, but to no avail. Arcanthos was gone.

Back on Earth, Arcanthos stood in front of a desperate, powerstarved man. He rambled about 'needing saving' and 'help from the Gods'. However, before Arcanthos could even assess the situation, a group of heroes desperate to make a name for themselves burst into the thieves' home. The ensuing battle lasted for hours, ending with the death of the heroes and the thief, and leaving the ritual book used in the summoning burnt to a crisp.

Arcanthos walked out into the cool of night. This world was now his playground...

The world of mortals has been a colder and darker place with Arachnos around, but even he has felt his limitations. Upon being ripped from the Dreamlands, the shell he uses as a body suffered great degradation. Most of his power seeped from him to adjust to the new plane's laws. He lusted to regain what he had lost. Arcanthos searched the world for something to sustain his being.

He finally found one in an old, dark enclave controlled by the Circle of Thorns. With manipulation he brought them to his knees. They didn't understand what they had found in those caves. What they thought was a font of magical energy was what Arcanthos knew as a thin veil to his homeland. He was too weak to pass through and regain all his power, but he knew how to use it to draw out his magical nature and energy. Restrengthed and enveloped in greed for all things magical, he tore the life from the cult members and left the cave encased in an impenetrable shield of ice.

From city to city, Arcanthos traveled around the world, feasting of the fears of the communities he plagued amongst. He killed the weak with a stare and the strong with malicious ingenuity. His evil knew no bounds. From one day to the next, he lived to wreak chaos. But no evil goes unrighted.

A retired hero from Russia, Mr. Amazo, tracked down Arcanthos after hearing of his vile deeds. The two battled for months, with Arcanthos retreating whenever Mr. Amazo gained the upper hand. It looked like their would be no end to the destruction layed in the wake of the two adversaries. But fate intervened.

One day, as both Supers warred on each other on a bridge, an approaching school bus filled with children sparked Arcanthos to lure Mr. Amazo into a trap created by his own weakness; morality. Arcanthos outstretched his hand as the two fought, encasing the road in ice. Mr. Amazo rushed to save the school bus from sliding off the road and into the lake beneath. Laughing at the human, Arcanthos calmly walked over and glued Mr. Amazo to the bus with an intense cold blast, leaving only his head unstuck so he could hear his cries. The bus and Mr. Amazo fell into the lake.

Arcanthos flew down and hovered over the scene. He watched as Mr. Amazo and company sank beneath the water. The lake froze over soon after. 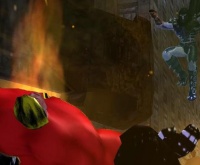