And I thought that Tornado Ranger was a stretch. This here is a last-minute character, something I cobbled together because I was desperate to complete the ranks of a new generation of Zodiac Guardsmen. Started out by making her very much a Cheetah-like character. But, while going through the chest symbols, I saw the one for "Radioactive" and something clicked. Something about the color combination of yellow and black and the stripes of a tiger just screamed to me. Her back story was a much easier process, it simply came to me just as I saved the character to the server.

Currently being watched by The Fallen Guardsmen 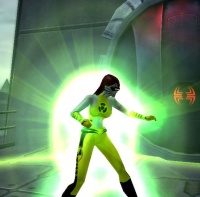 Dr. Gabriella DiNovi was a typical lab scientist for Arachnos. She specialized in nuclear radiation, but felt that she was treated as little more than a glorified lab assistant. Her day would start by showing up at the lab in Fort Darwin early in the morning. Her day would be spent analyzing and cataloging samples. She'd work until fairly late in the evening and take the ferry back to Port Oakes. She'd have dinner over the sink in her lonely apartment, check eBay for anything with tigers (her only obsession) and then call it a night.

The next day, she'd start the same thing all over again. Everyday would be just like the last, until that day. It seems that some recent escapee from the Zigg blew himself up all over Darwin's Landing. The fool probably got startled by a Snake "Sssssurprise!" attack. This was a far more common experience than one would expect.

Dr. DiNovi had to substitute for a Field Scientist who had either called in sick or died on assignment, she wasn't clear. Not that it mattered, she hated field assignments, but had little choice. She spent a day crawling through the wreckage, collecting little bits and pieces of something. Whether or not it was the remains of the exploding fool, Gabriella couldn't say.

After several hours of this task, she found herself growing faint and weak. She was about to ask for help, when everything suddenly went dark. The last thing she heard was a Wolf Spider saying "Hey, is that chick glowing?"

She came to in the Medical Bay and realized nothing would be the same, ever again. Arachnos had numerous super-powered agents, but always hungered for more. Since Gabriella was already in their employ, this was a "freebie". She was outfitted by Facemaker and sent out into The Rogue Isles to wreak havoc in the name of Lord Recluse.

Now the Atomic Tigress is starting out on a career of villainy. Initially reluctant, she's discovering that a night painting the town red (and no, it's not paint) is much more enjoyable than her previous life. Though, she still loves tigers.