Azhar al Balqis, Daughter of Husam al Balqis, Hand of Balqis, Glorious Blade of the Great Lady Balqis, Flower of Sheba, and holder of many more incredibly redundant titles is the Acting Matriarch of the Order of Balqis, an ancient guild of assassins dating back to the time of King Solomon. She is also a member of the League of Evil.

A Blossom in the Desert

Azhar al Balqis was born in Riyadh, the capital of Saudi Arabia. The daughter of Husam al Balqis, an infamous and feared crimelord and Patriarch of the ancient assassin's guild known as the Order of Balqis, she was raised in abject luxury and never wanted for anything. Aside from gifts like cars and gowns, she also received countless priceless swords and blades. As her mother had died when she was quite young, there was no male heir to the Balqis line. Husam began grooming her to lead the Order from a very young age. Luckily for him, she took to bladed combat and subterfuge like a fish to water.

When she was fifteen, Azhar was inducted into the Order after accomplishing her first mission. She killed her target without mercy, and perhaps more importantly, without detection. Her father was thrilled, and she soon began accompanying her relatives on various operations, quickly becoming one of the Order's most skilled assasins. By the age of twenty, she was perhaps the most skilled, at least with a blade. She adopted the codename 'Magnolia', after her favourite flower, the scent of which she generally wore as perfume.

The Order of Balqis has always been a far-reaching organization, and one of the primary branches is located in the Rogue Isles. Husam spent much time there, and Azhar traveled with him frequently. Eventually, he elected to set up shop there permanently, and within a few years he had become one of the most feared crimelords in the Isles, with an incredible degree of influence among the criminal element. There are few crime bosses in the region who did not know to call on the Order of Balqis when they needed someone assassinated quietly. 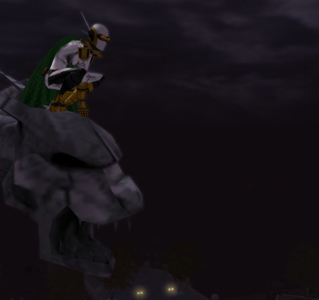 Azhar in her infiltration hardsuit, designed by Gigarad.
All that was threatened in early 2006, when Husam al Balqis came down with a mysterious and apparently terminal disease. Struggling to maintain his power structure, he eventually caved to pressure from his advisors and named Azhar Acting Matriarch of the Order. While many less scrupulous children would take this opportunity to cement their hold over the family business, Azhar was always her daddy's girl, and remained staunchly loyal to her ailing father. She did take over the maintenance and operations of the Order, but she did so while simultaneously scouring the globe for a means to heal her father. After consulting with the mysterious Mother Kindly, she believes that she may have discovered such a panacea: a mystical artifact called the Veil of Medea. The trick, now, is finding it.

In the hopes of furthering her goals, she has joined forces with the League of Evil, a coalition of supervillains. In exchange for their support in her endeavours, she is willing to provide them with the services of her guild of assassins. She is a frequent associate of fellow Leaguer Gigarad, with whom she is often seen.

The Order of Balqis 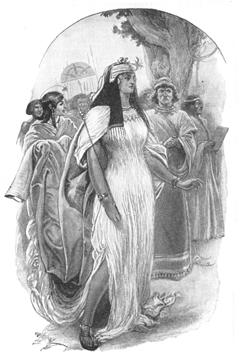 Balqis, Queen of Sheba.
The Order of Balqis began in the time of King Solomon (approximately 950 BC), arising as a group of elite warriors in the service of Balqis (also variously called Bilqis and Makeda), the Queen of Sheba. The leader of the group, the Patriarch, was Balqis's own son, and the command of the Order continued down this family line. Until Azhar al Balqis assumed control in 2006, there had never been a Matriarch.

The goals of the Order are fairly straightforward. They seek to honour the name of Queen Balqis by ensuring that it will never be forgotten by mortal man. Their tactic for preserving the name of Balqis in the public imagination is to attach it to the high profile killings which the group often conducts.

Under the surface of what seems to be some sort of odd archaic memorial to a long-dead queen, however, lurks a more sinister purpose. Numerous legends describe Balqis as a human guise of Lilitu (in Hebrew Lilith), the Queen of Hell, and the Order of Balqis is no stranger to these legends. As descendants of the queen herself, the leaders of the Order believe that they bear the spark of divine creation, granted unto Lilitu when she and Adham (in Hebrew Adam) were created by Allah. The targets slain by their assassins, therefore, serve a dual purpose. They are not only a means to ensuring the continued infamy of the name of Balqis, but they are also sacrifices to the semi-deified queen.

Queen Balqis/Lilitu, the goddess of the Order, is not to be confused with Lilitu, the powerful succubus summoned by the Circle of Thorns. While many demonesses are named Lilitu or Lilith, it is in honour of the original demonqueen, and not because they are she.