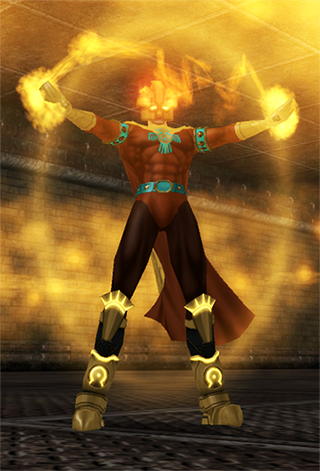 Hector possesses the ability to control and manipulate all forms of rock and earthly substances and materials.

Hector Garza's father Arturro died while he was just a child, leaving his mother to raise him on her own. The two immigrated back to her native Mexico City from America shortly after Arturro's death and luckily, she was able to find work as a housekeeper. Enter Manuel Herrera. With more money than any one man should rightly have, the real estate mogul took Hector's mother on as he and his wife's housekeeper, even allowing her and Hector to move from their (extremely) modest one-bedroom apartment to live on his massive estate.

One day while he was playing outside, Hector heard screaming and shouting. It lasted for hours and the next thing he knew, Mrs. Herrera had left. In the days that followed, she moved out and Hector and his mother were allowed to live in Manuel’s mansion. He was too young to understand it at the time but he’d later come to find out Mrs. Herrera had just discovered her husband had been having an affair with Hector’s mother and divorced him.

For the next five years Hector wanted for nothing. He was sent to the finest schools and given whatever toys and games he wished for. Manuel treated him like he was the son he never had. Yes, Hector and his mother were living the good life. And then, all of a sudden, it ended. His mother discovered Manuel had secretly reconciled with his ex-wife and when she confronted him, he told her he planned on remarrying her and Hector and his mother were promptly kicked out, forced to return to the life they’d had before.

Hector learned two things from these events. He vowed to never rely on anyone as much as his mother had Manuel. And the second? He’d grown accustomed to the finer things in life and he was determined to regain the wealth and lifestyle he and his mother had lost. But he refused to spend twenty years working hard to maybe get rich in his fifties. No, he wanted it all right now. Though it would’ve been easy, crime wasn’t an option. You can’t get rich from prison. And someone needed to take care of his mother. So when he literally stumbled upon a centuries-old piece of Aztec gold on the beach and managed to sell it for a small fortune, he knew he’d found his calling; treasure hunting. And not the “wandering the beach with a metal detector” kind of treasure hunting. No, the legit ‘traveling across countries tracking down leads’ treasure hunting.

A few years passed, and while he’d come across some unique items every now and then, he still hadn’t found “the big one” yet. That one rare find that would set him up for life. And then he heard about The Daystar. 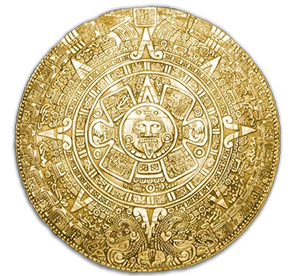 An ancient Aztec artifact, the Daystar was rumored to be a basketball-sized sphere made of one hundred percent solid gold. Following several leads Hector searched for the Daystar for months, racing against rival treasure hunters in the process. His search eventually led him to a small village in South America. Legend has it that the Daystar had protected the village for centuries. Natural disasters such as landslides, earthquakes, and volcano eruptions all seemed to somehow narrowly miss the land the village occupied. But Hector didn't believe in the fantastic. So when the village's inhabitants warned Hector that taking the Daystar would mean certain doom for their home, he simply shrugged and said too bad.

After weeks and weeks of searching, Hector discovered a maze of catacombs underneath the village and at its center, The Daystar. He'd found it. Before anyone else. Absconding with the artifact into the surrounding jungle, he got about a mile away before he heard gunshots and realized that mercenaries had reached the village. And they weren't patient enough to actually look for the Daystar. Now even though Hector may have been selfish and more than a little greedy, he wasn't about to let a whole village be slaughtered because of him. He returned and confronted the mercenaries threatening the villagers at gunpoint. They demanded the Daystar and when Hector valiantly refused to hand it over to them, they shot him.

On the verge of death, Hector was visited by Huītzilōpōchtli, the Aztec sun god. He commended Hector for setting aside his greed and returning to help his people. He offered Hector the power to save himself and the village on the condition that he'd give up disturbing sacred artifacts like the Daystar. Hector readily agreed. He was restored to life with the power to manipulate the earth and the ability to create and control fire. Using his newfound powers he forced the mercenaries to flee, saving the village. He returned the Daystar and has been operating as a guardian of the defenseless on behalf of Huītzilōpōchtli ever since.

Empowered by the Aztec sun god Huītzilōpōchtli, Hector possesses a host of mystical abilities. His powers include:

Earth Manipulation: Hector possesses the ability to manipulate the geography of his surrounding environment through force of will. He is able to reshape rock and stone into shields or blunt weapons like hammers, spears and clubs, change the consistency of the earth to create pits and quicksand, erect walls of solid stone for protection, and telekinetically move rocks with his mind.

Fire Manipulation: Hector is able to generate and project fire from any point on his body as powerful concussive blasts of pure fire and extreme heat as well as cause flames to to grow in size and intensity, or take any form that he desires, such as streams or funnels.