Tommy's personality is that of The Good Boy. He can always be counted on doing the right thing, no matter how much of an inconvenience it is to him, no matter how much he gripes. He's a good student to make his family proud, a good worker to be a credit to society, and a good businessman to make sure his supergroup has the funding it needs to maintain daily operations. How he handles it without cracking, no one is entirely sure.

Most of Back Yard Boom's powers derive from his cybernetics. Reinforced plating under his skin, skeletal reinforcements, enhanced muscle, artificial "back-up" organs, and an artificial nerve system have helped him to withstand damage that would kill many heroes, much less normal humans. His replacement cybernetic arms are filled with numerous offensive and defensive systems, most notably a kinetic energy feedback system that increases his strength and the force of his attacks.

Invulnerability. His internal cybernetics are designed to keep him alive no matter what. This has led to him having nanite repair systems installed in his body to assist with rebuilding and damaged or destroyed parts of his body. The armor on his arms and under his skin can be "shifted" at the molecular level by using what he calls "Overdrive Mode," increasing the damage resistance by a factor of fifty. He risks burning out major systems when he uses it, so it's only used in dire situations.

Energy Melee. The Kinetic Feedback Loop system built into his arms amplifies the force of Back Yard Boom's attacks. Combined with his knowledge of boxing, he has become an expert at placing damage right where he wants it on an enemy.

Superjump: They cybernetics that increase Tommy's ability to take damage have also allowed him the strength to leap great distances.

Fitness: In addition to an intense workout regimen, Back Yard Boom also uses nanites to increase his resistance to injury and fatigue.

Ice Mastery. Back Yard Boom reverse-engineered the cryoprojection system of a Crey CBX-9 Pistol and integrated it into his arms. He can now fire blasts of supercooled air to stop villains in their tracks, as well as to create a storm of ice fragments from nearby sources of water, such as drainpipes and other plumbing.

Automotive mechanic: Back Yard Boom has recently finished an apprenticeship with Lou from Lou's Garage, and now has full ASE certifications.

I Know How Stuff Works: After an accident fighting The Warriors, Tommy was gifted with immense knowledge of science and mathematics. He gravitates towards mechanical engineering, though he has shown keen understanding of human and superhuman biology.

Boxing: The time spent pestering Back Alley Brawler led to some rudimentary fighting skills, which Tommy calls "Boxing." It's actually a mix of a few different styles of fighting, but it's centered around landing one bone-crushing punch after another on his enemies.

Time Management: You try fitting school, homework, a mechanic's job, being a superhero, running the financial side of a supergroup, family, church, sleep and regular trips via Portal to visit your girlfriend, and see if you can handle it as good as Back Yard Boom.

Back Yard Boom has one major weakness, psionic attacks. His guess is that due to the excessive amount of cybernetics in his body, his neural net isn't as capable of withstanding psionic energies as natural nervous systems are. He's also recently conquered a fear of heights, though it sometimes re-occurs when he least needs it. He also sets off metal detectors, causing no end of irritation.

Portable Mechanic's Kit: The pouches and bandoleers on Tommy's costume contain tools, spare parts, and test equipment in order for him to do quick field repairs on his or others' cybernetics.

Dataglasses: The eyeglasses worn by Back Yard Boom are more than simple corrective lenses. They combine with the PDA and wireless internet access system integrated in his cybernetics to provide real-time intelligence updates about his mission. He can also call up any repair manual that has been put into electronic format so that he can make sure he's doing everything right.

Tommy Pachowski was a dull but loyal kid growing up in the Back Yards of the High Park section of Kings Row. He never really had any kind of drive outside of playing football. His father, a fireman and arson investigator, wanted to ensure that his son had some kind of marketable skill if football wasn't in his future, so he made Tommy a promise. They'd work every day on restoring a car, mostly to give Tommy something to do, but also to help build the skills need to be an auto mechanic. Tommy took to auto repair like a fish to water. By the time Tommy entered high school at Galaxy City Central, auto repair and football were his major reasons for showing up to classes. Without regular attendance he'd be off the team, and without good grades his car would be gone and sold for parts. So Tommy studied and managed grades that were at least slightly above average. He began to make friends, too, including an exchange student who later became the first girl he either dated or kissed.

Then the incident occurred. Tommy was bumped up to varsity because of the skills he'd learned playing football on the concrete and gravel plazas of the Back Yards. He'd become a dominant cornerback, leading the league in interceptions and setting a new record for most sacks during a single game. With his defensive skills shining, the Galaxy City Central team made its way to the state championships.

Their opponents at New Eastgate High School had a different idea. Two of their offensive linemen and a running back had ingested large doses of Superadine prior to the game. On a regular play, the coach substituted all three of them into the game for his three first-string players. Immediately on the snap, the three drug-fueled players charged towards Tommy as he attempted another sack. They collided with him, then used their enhanced strength to break his back, dislocate and shatter the bones in his arms, and crush all the ribs on one side of his body. They continued beating on him even as players from both teams tried to remove the raging players from their fellow athlete. A timely appearance by the Back Alley Brawler and a team of Paragon City Police officers resulted in the subduing of the three attackers. Tommy was rushed to Cygnus Medical Center for emergency surgery.

Tommy woke up three days later. His arms were unable to be repaired or reattached properly to his body, so they were both fully amputated. His parents, his little sister, and the exchange student had all been by his side, waiting for him to regain consciousness. After the initial shock wore off, Tommy began to come out of a shell he'd created to hide his personality. The process of learning to live as a cripple did not sit well with Tommy, so he set his mind to work again, figuring out how he could take care of himself in this state. In this process, he wound up designing a series of devices to help crippled people in exercise. The royalties he received for licensing his patents showed off a business sense he kept hidden. The boy who used to do just enough to get by showed the extent of his own personal genius. 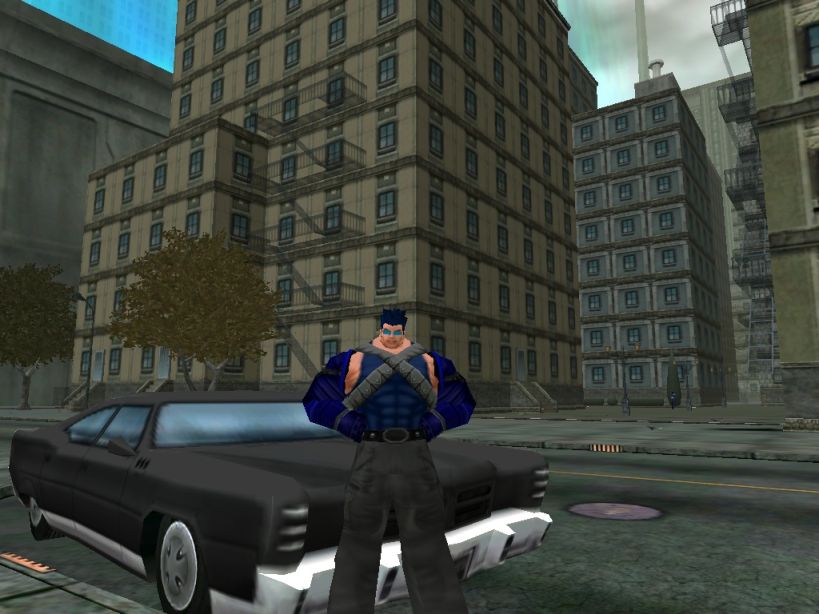 Two cybernetics specialists at MIT took notice of Tommy's exercise equipment when they expanded their research to ensuring proper anchoring of artificial limbs to bone and muscle. They approached Tommy, asking him if he'd like to help them by trying out their experimental cybernetics systems. After a series of operations to rebuild his nervous system and attach new arms, Tommy found himself as a test subject. He also had numerous types of extra organs added, subdermal plating to protect transplanted organs and a feedback system to increase physical strength and reflexes.

Had he not been visited by Back Alley Brawler as part of a photo-op, Tommy might have settled into the comfortable rut as an inventor. Instead he mistook Brawler's gloves for cybernetics, and spouted off that he'd follow in Back Alley Brawler's footsteps to fight crime.

Concepts like tact were not part of Tommy's personality. Naming himself Back Yard Boom as a nod to his erstwhile mentor and to the neighborhood where he grew up, Tommy set out to become a licensed hero.

After that event, he pestered Back Alley Brawler to teach him to box, if only to help him with the fight against crime. And yes, Tommy was surprised when he found out that Back Alley Brawler's gloves were only gloves, not cyberarms. Still, though, he'd made a promise to the city and did his best to keep it. Along the way, he joined a group of like-minded teenaged heroes in the Young Phalanx. Each of them emulated a particular hero or were related somehow to that hero's life. The Young Phalanx has been Tommy's responsibility since its founder Stateslad was sent to numerous different dimensions in his work with Portal Corporation. 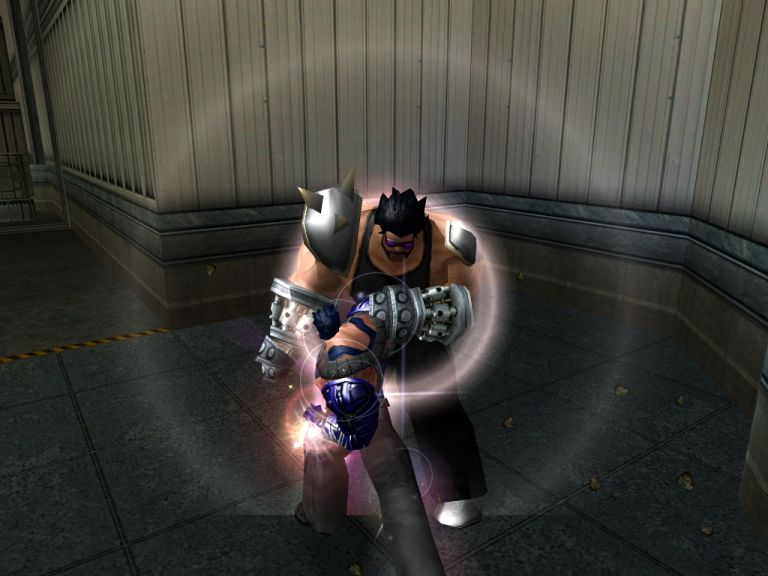 Tommy manages the day-to-day affairs of the group while finishing up his schooling at St. Ignatius' Prep (where he was classmates with the Cobalt Claymore). Graduating from St. Ignatius in 2007, he enrolled at Paragon City University to study Mechanical Engineering. He has also overseen the launch of an official Young Phalanx manga in Japan as well as a line of action figures to help pay the bills. As if Tommy doesn't have enough to keep him busy, he also runs a car customization shop at Lou's Garage in Skyway City. He customizes his cybernetics almost as much as he does cars. His most interesting piece of cybernetics comes from the LCD tattoos under his skin and etched into his arms. He is able to turn them on and off with a thought, thus avoiding his mother's wrath. 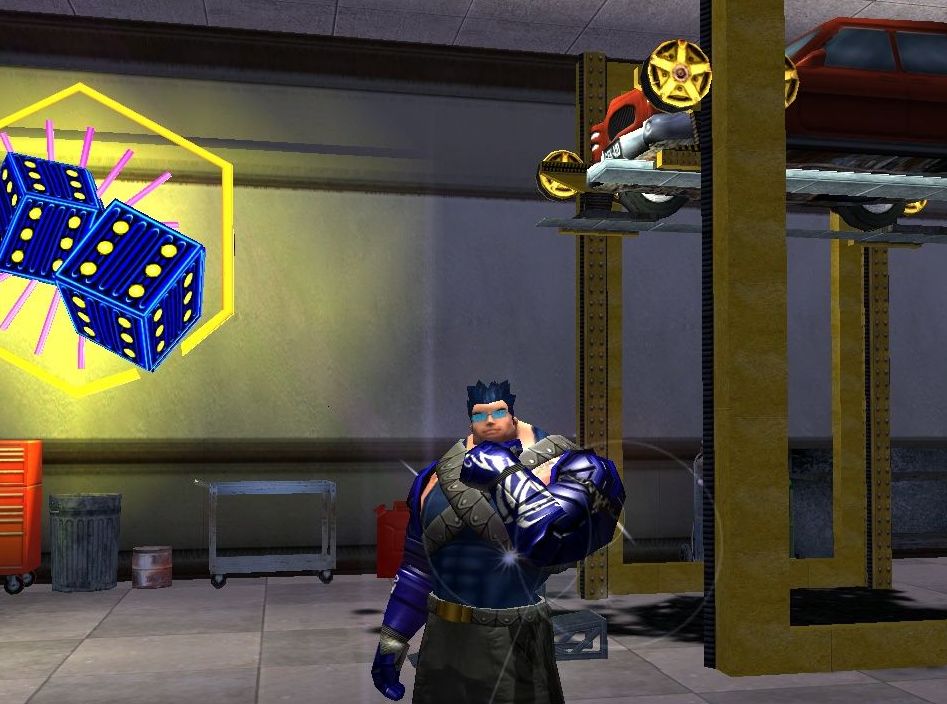 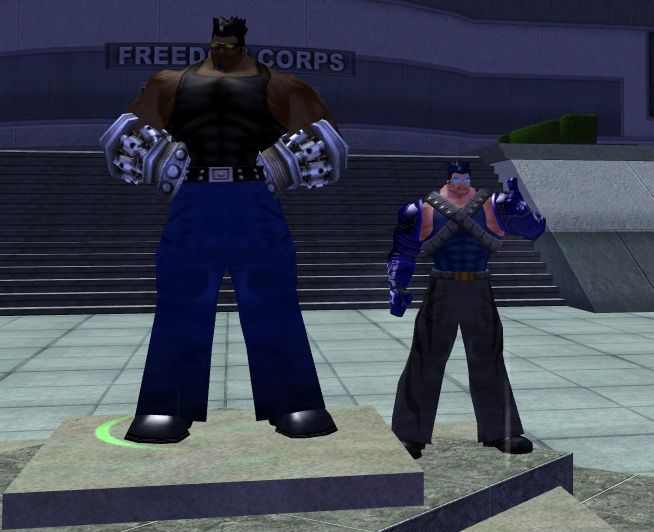 The weirdest thing that has happened so far to Back Yard Boom has been the accident that increased his intelligence even further. A miscalculation in using the Geometric Gauntlets (a reality-shifting device) against The Warriors caused his desire to be smart enough to handle all aspects of science to be made manifest. He hides it as best as he can, claiming that it wore off after a few weeks.

The high point in his career has been defeating Doctor Crom, a villainous scientist bent on the destruction of Ascendant, one of Paragon City's most-loved heroes. Prior to that, the defeat of the Freakshow-Malta monster known as R3d 0k70b3r D3l74 was the action for which he was best known.

Tommy is also working to bring Hanabi the Xiti back to the side of heroes. He often winds up scolding her much like he does with his little sister.

Tommy attends St. Florian's Catholic Church in High Park, and is quite often seen with Hephaestus 1 and Cobalt Claymore when there.