Alisande Curie was born into the leisure classes of Nu Paris, to unremarkable parents whose contributions were limited to the occasional art criticism or online article. She was identified by the school system as an achiever from a very early age, and fast-tracked into a variety of advanaced learning programmes that she excelled at.

She chose to contribute to society as a peacekeeper, and worked with the Paris Gendarmerie quelling a number of Resistance riots and activites. Realising the limited career opportunities in Praetorian Europe she moved to Nova Praetoria after a few years, initially working with the PPD, but finding her true calling as a trainer for Powers Division.

Her track record and obviously capabilities lead her to being offered the position of Chief Security Officer for an experimental community known as Paradise City located near Ibiza. This city was to house the pan-European group of superheroes known as the Paradise City Protectors, as well as serve a few other useful functions, primarily the production of orgone for the manufacture of power enhancers and combat drugs.

Alisande took the codename Bastille on assumption of her role as a Unity hero.

Bastille and her core group of mutant footsoldiers have recently crossed over to Primal Earth to assess its strengths and weaknesses. They have settled in the area where she felt their presence was needed the most - the Rogue Isles. They have been policing both the Isles and Paragon City since their arrival, dispensing justice and carrying out acts designed to destabilise what law enforcement systems they find there.

Bastille is the leader of the Paradise City Protectors.

Bastille carries herself with a firm but friendly demeanour, in the spirit of community policing.

She is more than a little out of place in our Earth, and quite taken aback by the financial system, the pleasure-negative morality systems and many other aspects of our world.

She is a patient and cool-headed thinker, and firmly believes that she can solve most problems on our Earth, from super-crime to capitalism. Any disagreement from native Primal Earthers is likely to be dismissed as brainwashing.

Bastille has no superpowers, but is in peak physical condition for a woman in her early thirties who engages daily in vigorous cardio-vascular and strength-training exercise.

Her metabolism is usually enhanced by a cocktail of combat drugs, which afford her superior reflexes, alertness, sensory awareness and data processing capabilities. These drugs are taken in pill form daily, but enhanced by the use of orgone cigarettes. Bastille currently smokes 30 a day.

Stamadiene A metabolic booster taken as a daily pill. Promotes physical and mental energy and allows the user to get by on 2 hours sleep per night.

Neuraplex A synaptic enhancer and stimulant that boosts the user's reaction time. Activated by adrenalin. A trained user can mentally trigger a small adrenalin burst to give themselves a quick boost for combat situations, the effect of which is that time appears to slow down.

Prodorphine a painkiller and euphoric, commonly referred to as Joy++.

Orgone Taser handheld device that delivers a bio-energetic pulse that incapacitates the target by overloading its pleasure nerves. 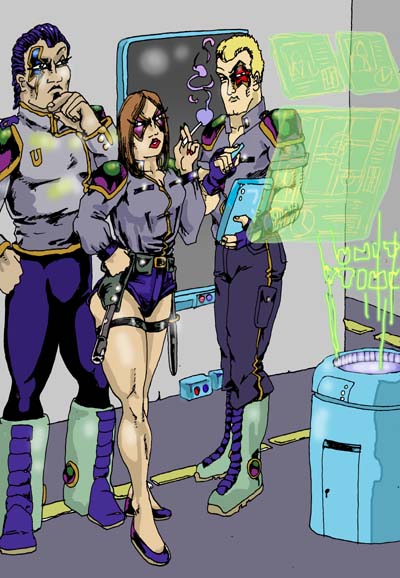 Bastille has moderate training in hand-to-hand combat, specialising in the French kick-boxing art of savate.

She is an expert marksman, and capable of hitting targets with extreme precision, especially when under the influence of her combat drugs.

She is also a skilled escapologist, having studied and practiced most of Houdini's known reportoire, and is able to escape from almost any restraint with the correct preparation and equipment.

Her English is very good, but accented enough to identify her as a non-native speaker.

Despite her drive and skills, Bastille is only human, and occasionally finds herself defeated through sheer bad luck.

Bastille is registered as "Bastille II" out of deference to the original male Unity Hero called Bastille who contributed to world safety in the 1940s.

Bastille is a parallel earth counterpart of Liberty