Android MI-0 (Mimetic Intelligence, Type Zero) was originally designed by Dr. Kazuhiro Matsuda at the behest of the shadowy G Syndicate. The notorious crime organization offered to bankroll Dr. Matsuda's research in synthetic intelligence and biomechanical engineering, but in exchange, they demanded that he use that knowledge to create unstoppable android enforcers and assassins for them. Unable to secure legitimate funding for his work, the brilliant but eccentric scientist reluctantly agreed.

MI-0 was well into development when Dr. Matsuda's conscience finally got the best of him. Staging a lab explosion to cover his disappearance, he fled to Paragon City with the prototype, who he proceeded to raise in secret as his teenage niece, Mio. Equipped with a limiter that restricted her abilities to human levels, the gynoid had no reason to believe she was anything but an ordinary teen.

Word of Dr. Matsuda's survival eventually made its way back to the G Syndicate. Operatives were dispatched to the United States with orders to recapture the fugitive scientist and his creation. In the struggle that followed, Dr. Matsuda was forced to disable Mio's limiter. With her full capabilities unleashed, Mio was able to turn the tables on the attackers, overpowering them with ease.

After the fight, a shaken Mio confronted her 'uncle', demanding answers. Dr. Matsuda had been planning to reveal her true nature to her eventually, but events had forced his hand. Seeing no other choice, he explained that she was not an ordinary girl at all, but a gynoid - a female android - and that the man she knew as 'Uncle' was in fact her creator. The G Syndicate had invested a considerable sum in her development, and now they wanted her back.

Once she had overcome her initial shock, Mio took these revelations surprisingly well. It was then that she decided to register with the city authorities as a heroine, a path which would enable her to fight for the things that mattered to her while exploring her physical and mental limits.

Mio Matsuda has a strong competitive streak, and is driven to excel in life. She holds herself to high standards both personally and professionally, and is often her own worst critic. Though she is best known for her outgoing personality and playful sense of humor, she displays a quieter, more contemplative side in the company of close friends. 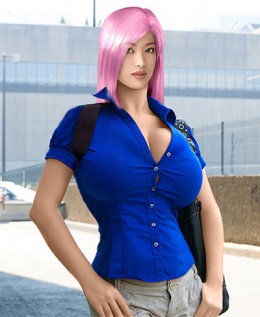 Mio found the mantle of leadership unexpectedly thrust upon her after the abrupt disappearance of Hazard-Guard's former command staff. Never one to turn her back on a challenge, she assumed command of the organization with the blessings of its remaining members, quickly building a reputation for herself as an adept administrator and gifted squad leader. During field operations, Mio prefers to lead from the front lines. She inspires her comrades on the battlefield with her hotblooded spirit and never-say-die attitude, while her sense of responsibility toward her teammates acts to temper her own more reckless urges.

Mio makes no secret of the fact that she loves a good fight, particularly against a skilled opponent. Though she feels duty-bound to try to resolve conflicts non-violently whenever possible, she shows little remorse if negotiations break down and the gloves have to come off. Similarly, while Mio is fully capable of overcoming foes through subterfuge and guile, she would be the first to admit that she prefers a straight-up fight to "all that sneaking around", as it "feels more honest".

In battle, Mio is a a deadpan snarker extraordinaire and inveterate punslinger, firing off crushing blows and sarcastic quips with equal abandon. She is also the embodiment of the Determinator trope, known for persevering in the face of impossible odds and willing to push her synthetic body to the breaking point (and beyond) rather than admit defeat.

Mio would be classified as Scrupulous under the Palladium RPG alignment system. For those unfamiliar with Palladium's line of RPG's, this means Mio will:

The shield generator housed within these impervium bracers projects a localized force field covering the outside of Mio's forearm. These buckler-like energy shields enable her to safely block melee weapons that would shear through normal matter, such as monofilament and energy blades, as well as providing additional protection against most other forms of attack. The weight of the bracers puts extra force behind her fist strikes in hand-to-hand combat, while servomotors built into the finger joints provide enhanced grip strength.

Cast from impervium alloy, these armored boots are equipped with a number of small electrohydrodynamic (EHD) thrusters. Though capable of generating sufficient force to enable Mio to hover briefly or fly short distances (represented by the Jump Pack power in-game), their main purpose is to provide additional maneuverability when leaping. The alloy boots also put added weight behind her kicks, and enable her to deliver a devastating thruster-assisted jumpkick.

This article about a character is a stub -- a small, but growing, work in progress. If you're the creator of this character, why not consider expanding it?
Retrieved from "https://virtueverse.net/wiki/Battle_Girl_Mio"
Categories: Character Stubs | Character | Hero | Female | Technology | Scrapper | Android