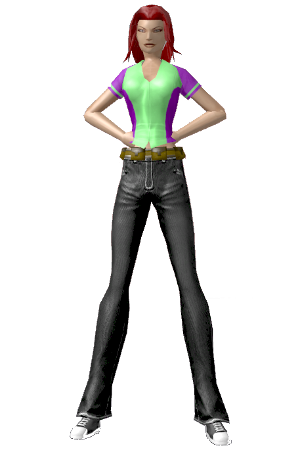 Beatriz Anna Valentina Allegra da Fontaine (Bea for short) was born in São Paulo (Brazil), the daughter of Rodrigo Maldonado da Fontaine and Maria Isabel da Silva. Her mother died in a car accident when Bea was 4 years old, and her father - a successful cattle rancher - raised Bea alone on the family's farm.

As the only child of a fortunate single parent, Bea lived a mostly pampered life, dividing her time between school, her duties on the ranch, and trips to the beaches of Ipanema and Copacabana, until her mutant powers surfaced at age 13.

After a period of adaptation and some counselling, she grew accustomed to her new abilities and used them sparingly, mostly her enhanced strength and durability to deal with beach bullies or her "imperceptibility" power to avoid confrontations.

Bea is usually easygoing and affable, relying on her "imperceptibility" power to avoid confrontation, but she has been known to be stubborn and passionate about certain subjects.

As the only child of a fortunate single parent, Bea has lived a mostly pampered life so far. Rodrigo da Fontaine doted on his daughter and hardly refused her anything. Despite this, Bea did not grow up a spoiled brat; she has shown kindness to those less fortunate or more socially awkward than her and has an intense dislike of sadists, bullies, and braggarts. During her many stays in Ipanema and Copacabana, she got used to being ogled on the beach, but anything further and she would physically pick up the offending Lothario and toss him as far as she could into the sea. After a few times, word got around to "avoid the crazy redhead chick" but there was always someone who would try his luck and say something rude, and then she would have to teach him "politeness"...

Bea has no real interest in social media, preferring to be outdoors than stuck in front of a computer. She learned about the best known American heroes like Senhora Liberdade (Ms. Liberty), Aço Azul (Blue Steel), Flecha Vermelha (Manticore), Senhora Valquíria (Valkyrie), Citadela (Citadel), or Luminância (Luminary) from watching news reports on Brazilian TV. Apart from those news reports and one or two favourite shows (Universo Steven being one of them), she watched very little TV while she was at the ranch.

Hospitals bring back bad memories: she watched her mother die in a hospital emergency ward after that tragic car crash.

When she is emotionally distressed, Bea's 'tell' is biting her lower lip; when asked, she will claim that she is 'o-kay' even if she is definitely not OK. Severe stress or emotional trauma will prompt her to use her perception manipulation abilities to simply "disappear".

Her father used to playfully call her a "silly goose" (ganso tolo) when she did something rather foolish. Bea has taken the habit to admonish herself and (teasingly) others as well in the same way.

She was raised a Catholic and is still deeply religious.

Bea likes Brazilian football, which she played when she was younger, and liked to tease her teammates that American futebol is not real futebol. She also likes to play volleyball.

She doesn't like pickles, or math, or horror movies.

Bea keeps herself in good physical shape, and she is an expert swimmer.

She is not techno-savvy but is good at maintaining and repairing mechanical devices as complex as a combustion engine from helping to take care of the machinery around her father's ranch.

Bea's native tongue is Portuguese. She speaks English with a slight accent, often inserting Portuguese expressions into her conversation.

Since her arrival in Paragon City, she has mostly stuck with wearing casual clothing rather than the usual "hero costume" while on patrols, since her TK field is usually enough to protect both her and whatever she is wearing. While her father was under witness protection during his testimony in Brazil, she was asked by the FBSA to "keep a low profile" and she experimented with a few costumes to conceal her identity. Once the trial was over and her father moved to Paragon City, she settled on jeans, a loose sleeves' top with the image of the Brazilian flag, and her distinctive white cowboy hat (which belonged to her grandfather).

She usually wears a multi-purpose belt with pouches to hold the blood sugar level monitor/glucagon dispensing apparatus her former teammate Galvanic Girl devised for her, as well as glucose tablets and her cell phone.

Bea usually wears a small silver cross on a silver chain - it was a gift from her father and the cross was blessed by her São Paulo parish priest, Pastor Augusta.