Blue-Eyed Fox was created by Rose in Winter for use in RP in the City of Villains game. She is an undercover agent, keeping an eye on various Arachnos activities. Alpha Sanction is, as the guild motto says, "Guiding the Hand that Guides Arachnos." Fox (or Sonja) works with Longbow, and sardonically calls herself a "Hero in Disguise."

Most of the time, Fox is cheerful and flirtatious. She likes men very much, sometimes to the point of getting a little distracted during missions. The trait she likes most in a man is intelligence – height is a bonus, but at nearly 8’ she is resigned to dating shorter men. She likes a man who can keep up a logical debate even while deep in a cavern or sneaking around an abandoned warehouse or lab. Sonja’s parents were serious about her education; she worked hard in school and attended prestigious McGill University in Canada. Her interest in education and her devotion to improving her intellect have not changed since graduation. However, when her rage is growing she doesn't always display her intelligence; in fact, she has been known to shout, “Sonja smash little man!” on occasion.

Fox is uniformly friendly and helpful, unusual qualities in villains. She has one hell of a temper, but she has learned to keep it on a short leash; she generally displays it only in battle. The only thing that changes this attitude is someone asking about her “fall from grace.” That is likely to earn one a well-placed, chain-wrapped wrist to the face – if you want to keep all your teeth, don’t ask.

Blue-Eyed Fox’s powers focus entirely on two things: her size and her temper. It took years of training to change her “attack first, ask questions later” style of schoolyard brawling into the more elegant Martial Arts she uses today. In addition, it took years of, “You have to learn to control your temper!” to teach her not to get into those schoolyard brawls in the first place.

Invincible. Yeah, that comes from the Giant forbearers, too. The great Celtic giants were hard to hurt, and that blessed skin has been passed down, even if the height is somewhat diminished by intermarriage with humans. The only difference between Fox’s skin and ordinary human skin is that hers feels more like warm, pliable marble. It is silky smooth, hairless, and slightly harder than normal. However, there is still a pleasant amount of give – hugging her is not like embracing a statue.

After months of her back tingling, followed by horrendous backaches, Sonja visited a chiropractor her Longbow contact recommended. Fortunately, this particular doctor was familiar with heroes and their sometimes odd physical makeup. She did not think the two small lumps on Fox’s back were cancer – particularly since they were covered with downy fuzz. The doctor’s prediction was that the pain would stop soon enough -- once the wings she suspected were developing were full grown. Her suspicious proved correct; Fox’s Swanmay heritage had finally asserted itself. Within months, Blue-Eyed Fox had grown wings strong enough to give her flight, even when carrying heavy objects. (Unlike her mother, who only has wings when in swan form, Fox’s wings are present at all times.)

Blue-Eyed Fox has energy to burn. She almost never tires out during a fight, and prefers to keep going, pummeling equipment, rocks, or anything else convenient. She has enough control not to do so...at least, some of the time. 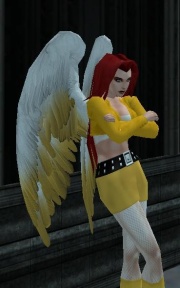 Don't ask me about Paragon City, sugah, and we'll get along just fine.

From the moment she was born, Sonja McCumhail’s parents knew they had an unusual child – although perfectly healthy, the little girl weighed upwards of 13 lbs. and was 29” long. The doctors were astounded, but the McCumhails weren’t. They were unusual people themselves. Sean McCumhail stood over 7’ tall, and his wife was 6’ 2”. “Did you expect one of those very tiny ones, then?” Sean asked the doctor, beaming over his daughter (who, in his massively muscled arms, looked tiny indeed).

Sonja McCumhail (pronounced “SONE-yah mik-COOL”) can trace her paternal ancestry back to the famous Irish giant Finn McCumhail and her maternal ancestry to a family of Norwegian Swanmays (women with the ability to transform into swans) who claimed Valkyrie blood. (Not the hero Valkyrie; the female warriors of Asatru belief.) From her mother, she got red hair and blue eyes; from her “black Irish” father she got pale, freckled skin. From both, she got height – at almost 8’, she is taller than both parents – strength – while her father is the stronger, her mother is no lightweight – and a moral grounding and excellent education.

It was this moral grounding – based more on the Golden Rule than any one religious practice – that made Sonja decide to dedicate her life to being a hero in Paragon City.

Another thing Sonja had gotten from her father was a quick temper. Sean had learned to control his, and now it was his turn to teach his daughter the same. Sonja, to both parents dismay, was not a quick study. She would come home from school with scrapes and bruises, and when her mother fussed would say cheerfully, “Yeah, but you should see the other guy!” Neither her school nor her parents were satisfied with this answer. The school threatened expulsion, which concerned both parents, but of further concern to her mother was that Sonja swore she could not remember the fights. To Trina, a Norwegian who had come to the United States to marry her Irish-American fiancé, this inability to remember sounded like the famous “berserker rage” of her Viking ancestors. As Sonja grew yet taller and stronger, Trina and Sean agreed something needed to be done.

That something was to enroll her in martial arts classes. To their intense relief, the meditation methods taught as part of the curriculum helped Sonja learn to control and direct her temper. The actual fighting gave her a channel for the excess energy that school and studying built up in her. Her sensei was very proud of her as she learned to fight fluidly and unceasingly, taking several championship titles during her school years.

Sonja, who loves skiing and snowboarding, chose to attend McGill University in Canada. After a lifetime in Texas, Canada was a culture shock both weather-wise and politically. The cold, snowy weather was an unpleasant change, but the political atmosphere was a pleasant one. Her parents had occasionally described Austin as “a little drop of blue in a big red state,” and Sonja was pleased to find that most Canadians shared her own liberal views. To this day, her closest friends are of Canadian ancestry, and still live there.

It was then Longbow approached the young hero, then going by Foxcub. The woman who later became her Longbow Contact explained that Longbow was sending some young heroes undercover in the Rogue Isles. They wanted her to be one of them. Sonja immediately accepted. A “fall from grace” was engineered, and Sonja allowed herself to be captured and sent to the Zig. She escaped during one of the Arachnos-engineered breakouts and went straight to the Seer on Mercy Island, giving her name as Blue-Eyed Fox. A Longbow psychic had placed mental blocks on her which made her deepest thoughts unreadable, and Fox made sure to keep her surface thoughts only on fabricationed emotion – anger at Longbow and all heroes, and a desire to impress Arachnos and join their ranks.

To facilitate this, Sonja made the acquaintance of Epsilon Victor. He was one of several people Longbow had suggested might have connections to Arachnos. Fox was able to attach herself to Victor to some degree; he was a suave and intelligent man and that impressed the young woman. They had numerous interactions and soon were on a first-name basis (Sonja and Vitya). Although not part of Vitya's organization of former street thugs, she and he worked together on a number of jobs. After several months of this, Vitya offered to speak to the leader of Alpha Sanction, of which he was a ranking member. Since Alpha Sanction was not widely known to be part of Arachnos, Fox was pleased to learn that it was -- and the source of Vitya's suspected connection to Arachnos. When Operative Bane offerered her a place in the group, she accepted. Fox remains a low-ranking member, but expresses allegiance to Alpha Sanction and to Arachnos.

Her "fall" was not a fall at all. She still works in the Rogue Isles, befriending Arachnos operatives and doing jobs for Arachnos when she can. This led to her acceptance into the Arachnos Special Ops group known as Alpha Sanction, enabling her to advance her agenda of spying on Arachnos. Besides, it affords her more opportunities for fascinating conversations with that silver fox Epsilon Victor. (It should be stressed that there is no relationship or "crush" on either side; the two find each other interesting, and Victor/Vitya may feel he is giving a naive young woman more knowledge of the world.)

Despite her years in Canada and Rhode Island, Sonja still speaks with a soft Southern accent. This is carried out in RP by replacing long "I" and "ar" sounds with "Ah" (as in, "Ah came here to kick ass and chew bubblegum..."), by ending "ing-words" with an apostrophe (as in "endin'"), and by addressing everyone as "sugah" or "darlin'."

Reckless, thinks her strength and invulnerability will carry her through anything. Tends to bite off more than she can chew.