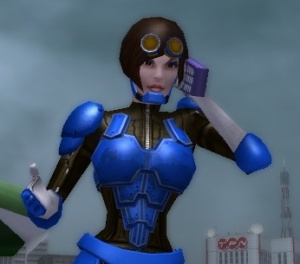 Sabrina had everything, a warm caring family & friends who loved her. Life was good but she and her friends wanted more. To make the world a better place. Together with her best friends Steve and Seymour, they announced their university project was to develop a technology that will reclaim the world from the Devouring Earth outside the safe zones. It was an ambitious undertaking and certainly gained the group alot of attention.

Average in many ways, Sabrina did the legwork in getting the components and provided her friends the assistance where they needed most. After years of labour, the device was finally ready and all that remains is to test it.

Unfortunately, their request to venture beyond the safe zone for a field test was rejected by the Authority. One day as Sabrina returned to the lab, She found the place ransacked with the device and related schematics gone. All thats left was a message from Seymour, stating that they have sneaked past the defense grid and is now beyond the safe zone. They have kept it a secret from her for the sake of her safety.

Weeks gone by and her friends has not returned. Worried about them she implored the PPD to venture beyond the defense grid to search for them. The PPD flat out refused stating their hands are tied dealing with criminal elements and insurgents.

Not willing to give up on her friends. Sabrina decided to take matter into her own hands. Stumbling upon Seymour's pet project for a personal power armor. She continues her friend's research hoping that the armour will provide adequate protection beyond the safe zone.

After months of tinkering, the armour is now complete. All that remains is to test it and earn the right to venture outside the safe zone. With that in mind, she dons her armour and heads off to the nearest Powers Division recruitment center.

An average human being, without any paramilitary training background. Sabrina's physique & capabilities is that of a healthy human female athlete.

While not exactly a technological savant. Sabrina has a knack of putting or fixing things together. Although she didn't quite fully understand Seymour's power armour schematics. Her minor talent & diligence helped her transform the design plan into an actual power armour even though its just a prototype.

A member of the Society of Medieval historical re-enactment club. Sabrina has held on to her champion title of sword-fighting consecutively for four years. Although she has only engaged in non-lethal combat, she puts what she has learnt to good use.

Based on the schematics originally designed by Seymour. Sabrina built this armour from various materials & equipment that she managed to scrounged up. Each and every part of the armour contains a microsized power cells & hydraulic system. Offering light protection, the hydraulics system also augments the wearer's strength, speed & endurance by a small margin.

As a prototype, it is a long way before it can transform any ordinary civilian into a fearsome powerhouse. Several features and functions shown in the original design plan are still not available yet.

Made of light weight ceramite & plastic alloy. The shield was introduced to augment the limited protection offered by the Power Armour. If used properly it offers adequate defense against most weapons except heavy munitions.

An finely crafted longsword which Sabrina won during the SMHRC melee bout. Unlike the practice swords that she normally uses. This sword is actually sharpened to cause lethal damage.

One of the many anti glare goggles that Steve possess. Sabrina wears this as a momento of her best friend. That and also for the purpose of blocking sun flares or blinding light shone directly into her eyes.