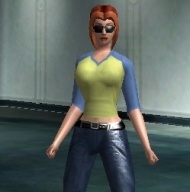 Born with a genetic mutation that limited her ability to grow up, and saddled with a cheesey name, it seems like life just likes playing jokes on her, so she keeps on laughing her problems away. She almost let her carefree attitude lead her down the path of crime once, but she turned it into an opportunity and established herself amongst Paragon City's heroes. In spite of her light-hearted facade, jokes about her height or apparent age occasionally get her riled up... in battle, this makes her reckless and brutal. Most importantly, Brown Mouse feels an unnecessarily deep remorse for a criminal act that she never actually followed through with. Its this memory which drives her to fight crime with great enthusiasm.

The Brown Mouse is actually a 24 year old woman who's small size is the result of her genetic mutation. She has auburn hair, brown eyes, and normal proportions for an adult human of her diminuative size and weight. At a glance, she could pass for a small child if wearing appropriate clothes and makeup to disguise herself, though a casual inspection reveals the truth. This is a look she tries to avoid unless going undercover for special missions. Though stronger than a typical full-sized human woman, she does not display any signs of an over-developed musculature. Rather, her muscle tissue is more dense as a result of her genetic mutation.

Brown Mouse and Foxy Ferret save the day and the kids!!

Relying on little more than her own skill and innate power, Brown Mouse's costume is rather minimalist. The costume itself is nothing but common tights which grants exceptional freedom of movement and keeps her profile as small as possible when the need to crawl through small openings arises. The tail seems a little thicker than necessary, but actually holds small pockets for lockpicks, a cellphone, and other small objects.

Additionally, she has special battle armor, a police uniform, and her standard civilian attire (all of which are displayed below).

Brown Mouse's mutant powers are little more than enhanced physical capabilities, giving her enhanced strength and agility at the cost of her reduced size. For her size, her strength is surprisingly high, allowing her to lift more than ten times her own body weight. In combat, she relies on her small size and enhanced reflexes to confuse opponents and leave them tripping over themselves trying to hit her.

With some formal training to augment her enhanced strength and reflexes, Brown Mouse fights like a master... She still has more to learn, however, and tries to set time aside for practice.

Though she relies primarily on her wits, skills, and natural talent to get by, there are threats and villains that are just too big for a tiny mutant girl to face unarmed. The Iron Mouse Armor is a collection of weapons and tech gear collected and assembled by Brown Mouse in her encounters with various criminal organizations. As such, its offensive capabilities change from time to time but has included a taser, stun grenades, EMP gauntlets, and even a flamethrower. Despite its protective armoring, it enables enough freedom of movement that Brown Mouse's martial arts and acrobatics skills aren't restricted. In fact, the name is misleading in that the armor is a light weight experimental polycarbon and not iron at all. One problem she faces is that --while talented-- she is not an especially brilliant inventor. Most of her additions to the armor end up breaking down, shorting out, or otherwise failing her over time. Thus the exact features of the suit are in continuous flux. Actually, though, this ends up working slightly to her benefit as her opponents never quite know what they're up against when she's dressed in the Iron Mouse suit.

Dru Nansie started out her costumed career as a burglar working with a small-time thug employed for freelance jobs for gangs like the Family and occasionally the Hellions or even Sky Raiders. He hand picked her for her size and set her up with her "mouse burglar" costume, knowing she could help him break into more secure places by crawling through small holes and ventilation shafts than he could never manage. On her very first break-in, guilt overwhelmed her and she turned on her would be partner-in-crime. When the police arrived, she had subdued him and gotten herself sent to City Hall for a new hero registration.

Having established herself as a hero, the Brown Mouse aggressively persued thieves above all others criminals. This is not to say that she was above rescuing kidnappees or thwarting destructive plots, but she still feels a need to make up for her almost criminal career --not to mention she knows where her strength lies, and having been trained by a thief, she knows how they think and usually how best to combat them. Despite becoming well-known throughout Paragon City, she always spends her time training with Mynx, much to the cat-girl's chargrin. Dru finds it amusing to play cat & mouse in their combat sessions, but has yet to best her feline mentor. Mynx maintains a friendly attitude about the whole thing, but adamantly insists that she "will never... EVER... be taken down by a mouse! Not even in practice." The mini-marvel, on the other hand, boasts each time that she's a little closer to coming out on top.

While on a task force for Positron, Dru realized that sometimes being small and hard to hit just isn't enough. Overwhelmed by clockwork foes and stunned into unconscious by electrical attacks, the tiny hero began the early stages of planning for a new weapon in her war on crime. She started collecting pieces with the very enemies that inspired her, dismantling a defeated oscillator and figuring out how to separate and use its electricity projector. A weapon here, a super-conductor there, confiscated avionics from the Sky Raiders, and a continuously changing array of experimental power sources and other electronics... She unveiled her suit in battle against the giant clockwork menace known as Babbage. It worked well, though the fight had exhausted some of the more hard to acquire components. As such, Brown Mouse only utilizes the armor against special threats that go above and beyond her standard foes... usually archvillains and giant monsters, but also against the occasional elite boss. Lately, she has had increasing contact with the Freakshow gang members and has required the additional support of her armor to compensate for their mechanical prosthetics.

Officer Druscilla Nansie, click to enlarge
Still feeling pangs of guilt over her criminal past despite a significant heroic career fighting the good fight, Dru enrolled in the police academy and completed her training. She was hired on to the Paragon Police Department soon after and now fights crime legitimately on two fronts. Only a handful of higher-ranking officers know her secret identity as the Brown Mouse, though many people speculate and suspect the truth simply because of her size... while heroes come in all manner of shapes and sizes in Paragon City, Dru has occasionally demonstrated her remarkable fighting talents while in police uniform which lends credit to theories about her identity. However, when patrolling the streets, she tries to maintain a more discreet effort, relying on her sidearm and standard police training. Her current assignment is patrolling the streets of Brickstown where her primary goal is to keep watch for prisoners who have escaped from the Ziggurski prison facility and to keep the peace when the 5th Column presence becomes a threat to innocents. She has also had occasional conflicts with Crey agents on the streets, though official reports indicate that some miscommunication resulted in shots being fired.