***From the Paragon Police Department Archives***

Douglas Cain awoke in the Zigursky Penitentiary morgue with no memory of his past. He was initially discovered naked and disoriented, wandering the lower halls of the penitentiary. The patrolling guards were startled by his 'gruesome' appearance and opened fire. Being almost as much machine as flesh and blood, Cain survived the encounter and many others since, earning him the moniker Bullet-Proof. He now searches to find who did this to him and why... And perhaps stop at Taco Bell along the way. Boy, am I hungry!!! 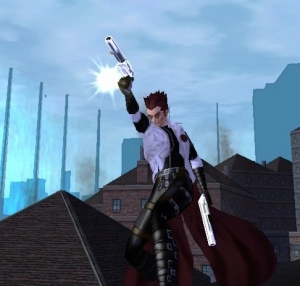 Bullet-Proof has been driven somewhat insane from the experiments upon him and seems to have two distinct personalities. One is quiet, focused and very dangerous, while the other is overly talkative and often full of ridiculous rantings which he believes to be 'witty.' It is unclear whether he purposefully exaggerates these foolish characteristics to make people feel unthreatened around him or if he truly is insane. <-- That's a blatant LIE! Okay, maybe it's true, but it's not very nice >.<

Cain refuses to take the lives of others. This is at times implausible, and often leads to greater problems or destruction, not to mention contradicts his employment as a 'gun for hire,' but, he refuses to kill his opponents no matter how dangerous they may be. As a result, he is often injured, and his body has become a patchwork of large scars, metal mesh, and stitch marks.

He has an almost obsessive love of Taco Bell and has even been known to stash a chalupa or two in his coat. It's NOT obsessive! I only went 14 times yesterday! 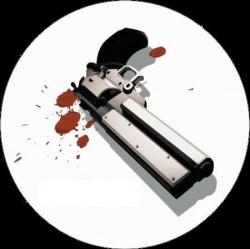 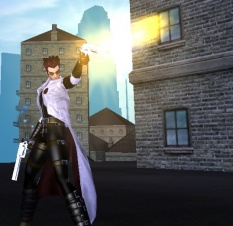