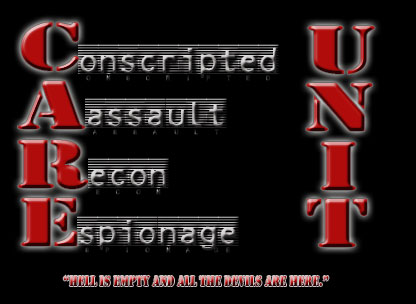 An RP group established in March 2009, it is an extension of the Next Gen and Purgatio groups, allowing players new and old to place any origin characters into. The idea behind C.A.R.E. was lifted from "The Dirty Dozen" and partially from the comic book "Strikeforce: Morituri". Members of the group play either convicts conscripted into service by a faked death or execution. Players can also take the place of staff watching over them. The VG is dark and deals with adult concepts and humor. For a reference, watch the HBO TV series "Oz" and add superpowers.

"NEW PRISONER," bellowed the guard as James Vasques(Alias Riot-Act) sauntered through the electro-static gate to the first cell block. He smirked, looking around at the people moving around him. A variety of jump suits indicated varying levels of danger and James looked down at his own, smiling; orange, minimum security and ground floor.

He looked up to the second floor and spotted medium security. They kept the violent criminals there and he spotted an empty cell. The guard shoved him from behind and James trotted down the platform towards the stairs ahead. A large form cut off his path as it moved before him...

Here it comes... "Hey James," said the familiar face before him, "Remember me?"

James remembered him; a previous hireling, James had to cut him loose after he started hitting the girls in the face. what was his name...?

"Enrique, right," asked James, a smirk on his face. He really wasn't sure, but found it hard not to see a little humor in forgetting a guys name that worked for you for 5 years.

"Richie motherfucker," he said through gritted teeth, "Enrique was my brother! He died working for you and you had me bury his ass under some bleachers 'cause you didn't want to risk any questions!" Richie shifted from left to right as a small circle formed around the two men. James sighed as he saw that the path was set on how this would go.

James was 5'2 and one hundred and seventy-five pounds. Richie was 6'4 and two hundred and fourty pounds.

"Richie," James started, his serious face evident,"You know I valued your service..." James shifted his foot so he could back off quickly. He concentrated and felt his mutant ability kicking in; calming waves of mental energy drafted out across the circle of men, dropping their dopamine levels drastically, and essentially boring them. The crowd started to disperse as James looked around. "I have to say though...," he said, his face splitting into a huge grin, "...your brother was a fucking moron." James folded in half with laughter and looked up, seeing the affects of his ability wear off promptly on Richie, who collided with him.

Lifted in a tackle, the massive man slammed the smaller into the glass wall of minimum security, sending cracks through the entire plate. Winded, James covered his head as Richie threw several shots at his face with no affect. A sudden flurry of activity had the two men surrounded and bellows of encouragement rolled over the two as Richie switched up, taking shots at his torso, narrowly blocked by James.

James took sight of his opponent, who was lost in his fury; reacting to pure emotion, Richie swung wildly, his shots sliding off of James toughened forearms as he feinted back and forth in a boxers stance. James spotted the female across the way on the second floor who watched in a white labcoat and he smirked up at her, giving her a "what's up" nod.

Time to impress the ladies... James lashed out suddenly as Richie pulled back to swing again, landing three shots fast and hard. A strike to the solar plexus, another to the throat and the last to the temple, causing Richie to whip suddenly to the left where James was waiting. Leaping into the air a good two and a half feet, he spun almost in a blur and caught the large man on the other side of his face with a high spinning back kick that was heard by the defined "cracking" noise; the crowd "Oooohed" as Richie tumbled to the other side, his neck broken.

James lifted his arms and yelled out, "So do I have my shit together or what," a hidden challenge to anyone who might think the small man weak. James saw the guards coming through the crowd, tazering people out of the way and he smirked. Putting two fingers in his mouth, he whistled loudly, getting the girls attention again. He put his hands in his pockets and gave her his best smile, "What's your name," he yelled as the guards moved within a few feet of him, the crowd rapidly moving around him. The girl blushed, clearly not a prisoner here, no doubt staff. She pointed at the guards moving in on him with dangerous intent and he shrugged them off, smirking. "What's your name," he yelled again as the guards surrounded him, tazers lashing out...

James woke up sore and in a low light; his jumpsuit was now yellow. Medium security and an empty cell. He winced, sitting up and looked across the way. Directly at eye level was the female he'd been talking to; he grinned. He tapped on the glass and she looked over, spotting him and began to blush. He grinned back and though that perhaps this wouldn't be that bad after all...

We are an RPing group looking for RPers, writers and artists! We are looking for the worst of the worst, who don't mind the concept of RPing their character forced to do stuff. Looking for a home? Sure, you can find us in game, but you might want to try our forums and fill out an application.