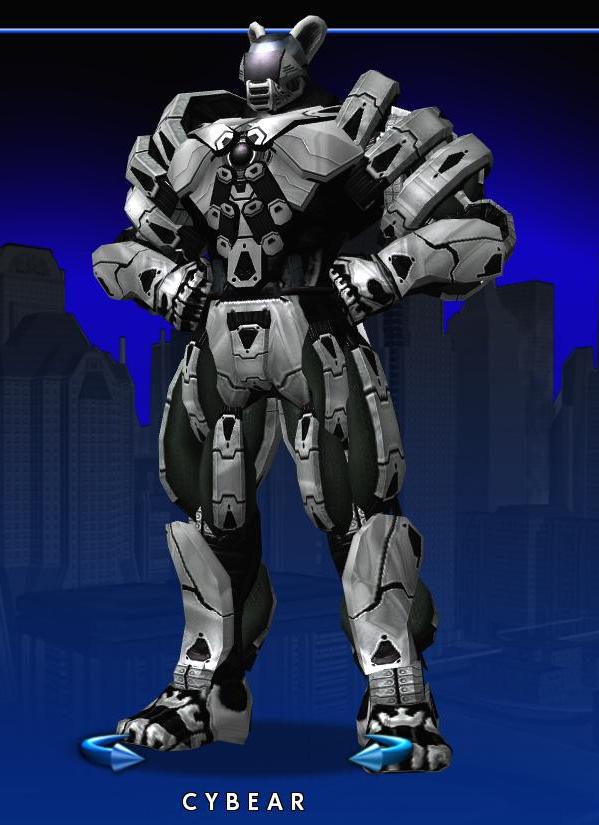 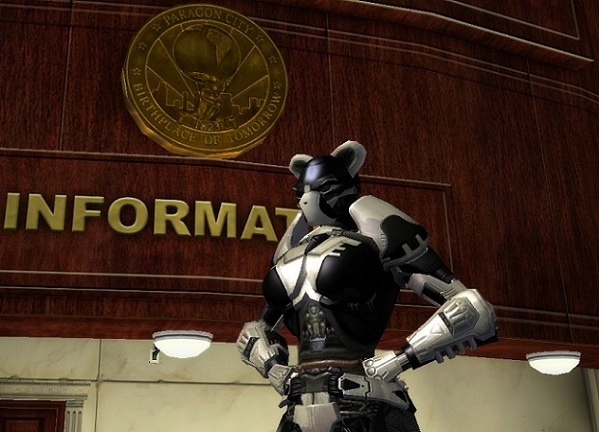 Cybear is friendly and easily approachable. Feel free just to walk up and chat. If I don't respond I'm likely doing something like homework or making dinner. I usually put him in power down mode when I am away from the keyboard. I will roleplay that characters who are of a higher level than myself are more powerful but don't god mod simply because you are level 50. Cybear is a lone wolf hero and does not supergroup. Appreciate the offer but it is him against the world.I usually don't team except to socialize although that may change if I get him to level 50. Please see the special notes at the bottom of this page if you are attempting to mind read him or determine something about his aura. Cybear has a very public image so feel free to recognize him from cartoons, comics, or even some kids lunchbox.

Most people find Cybear to be very friendly although the fact that he is a huge hulking robot and speaks in a voice reminiscent of the Cylons in the 1980s television show Battlestar Galactica, can be unsettling. Cybear will protect the innocent to the best of his ability even if it means his destruction. He can be a relentless opponent since even when destroyed he eventually appears to reform and construct himself in a manner similar to the Clockwork. The fact that he tends to speak in a cavalier and heroic manner often tends to be of an annoyance to many villains and sometimes even heroes who find his optimism naive. Cybear has an alternate version of armor that appears female instead of male. In the female version of her armor she still has a robotic voice but it has a feminine quality to it. Cybear technically has no gender and his demeanor remains the same regardless of the armor version he is using.

Cybear was actually part of a popular toy line known as the Mobile Animal Robot Soldiers (MARS) which also had a popular children's animation show. Initially, Cybear was little more than an oversized plastic toy that served as a mascot for the Toy Corporation that created MARS. Most of Cybear's functons were handled by remote control and crude programming for basic animatronic movement when he appeared at toy conventions, parades, and comic book conventions. He is well know to children and anyone else who may watch cartoons.

Cybear became self aware during a kidnapping attempt by the Council of Thorns where he somehow came to life on his own and fought several magi. Despite being equipped only with a oversized plastic sword, Cybear defeated the Circle of Thorn mages. Later it would be discovered that the Council may have also had a hand in the kidnapping attempt but the investigation hit a roadblock when the magi in custody all mysteriously disappeard.

Since his awakening, Cybear has been an immense publicity boon to the toy line and there is even a pending animated movie. Cybear is quite intelligent although programmers are unsure how he actually works as it should be impossible. Some have even speculated that the Clockwork King is involved but this is often dismissed given that Cybear has always worked within the law trying to assist the citizens of Paragon City. Cybear is capable of downloading data although he must make a wireless or cable connection to do so. Cybear also has long since designed and upgrade his armor from plastic to what appears to be steel. Cybear has also ditched his plastic sword for an Electron Blade which can cut through most unshielded substances instantly.

Any threat to the innocent and citizens of Paragon City. However, Cybear will try to reform those villains who are only guilty of petty crimes

Those characters will highly developed psychic powers will sense a mind behind all that metal despite Cybears often simplistic speech and stereotype cavalier hero behavior. Those that are highly adept in the arts of magic or aura sensing will also detect a soul or perhaps a piece of what used to be a soul deep within the armor. A master of magic would recognize Cybear to be a type of Golem or perhaps a literal Ghost in the Machine. However, even a master of magic would have trouble determining the exact nature of the soul and only the deepest delving and rituals would reveal that the soul has been damaged or hurt in some way. Empaths will get a neutral feeling or sense of calm from Cybear since he normally shows no emotion although anger can be felt when he fights evil or injustice.