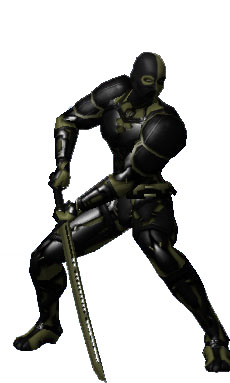 C A P E was designed to fill the role of a vigilante with the upcoming Going Rogue expansion. While the character was created as a hero he was meant to battle anyone with superpowers. The inspiration for this character is the X-Cutioner from Marvel's X-Men. I went the hero route for this character because being a hero is a matter of perspective and C A P E believes that by eliminating the heroes that threaten or are a danger to humanity he is doing what is right. It is believed by the hero community that his hatred of superpowered beings or metahumans comes from an act of superhero negligence that resulted in sparing his life but caused him the loss of a wife and child. The name C A P E comes from the fact that when C A P E defeats, kills, or captures a hero he collects their cape as a trophy. It is believed that he has a secret trophy room with these capes on display.

In my upcoming mission architect story C A P E is the main villain of the story. Rather than a katana/willpower scrapper he is a katana/ninjitsu arch villain that leads a group of human soldiers armed with technologically advanced battle suits that give them powers to rival those of superheroes. C A P E 's group in this story arch is known as The Collectors because when a hero falls at their hands they collect their cape. C A P E is not the leader of the group but is known for collecting the most capes for the Collector's trophy room. C A P E does not use the Collectors standard soldiers, instead he has trained his of group of killers known as the Death Squad. Death Squad soldiers are equipped with a haunting body armor and armed with dual pistols with multiple types of ammunition that adapt to what the situation calls for. The Death Squad wear distinct mask that ressemble a skull.