Arr, ye dinna know the tale o' Cap'n Booty? The most deadly pirate scoundrel man to sail the Seven Seas? Notorious he was for his pursuit o' booty for plunder and booty o' the feminine sort alike, aye!

It's said his wicked ways and abuses of womenfolk angered one o' the goddesses, or maybe just a sea witch, but the outcome was the same - Cap'n Booty now had the form of a comely young pirate wench, and booty all her own! Arr!

And 'tis said she must spend all her days with her enchanted shovel Storskovl, diggin' up booty and returnin' it to the forces o' good and niceness in the world! Only by so doin' can she become her ol' manly self again!

But just 'twixt you and me, I hear tell the lass still enjoys the pursuit o' booty ashore, e'en with feminine wiles as her lure! Aye, 'tis said she still shivers the timbers o' many a wench, does... The Saucy Cap'n Booty!

A handsome, sometimes charming, rogue, Bigbooté was seldom without willing female companionship. But one day, Bigbooté took one liberty too many, and paid a huge price for his transgression. Bigbooté intercepted and plundered a ship out of Stockholm, bearing colonists for the New Sweden colony on the Delaware river. A young woman on that ship, of uncommon beauty, caught the eye of the pirate captain, but the lady was not receptive. It mattered not.

But Bigbooté did not know the young woman was no ordinary girl, but the descendant of a long-ago tryst between a Norse god and a giantess. With a strong natural affinity for the magic of her homeland, her distress came to the notice of the goddess Freyja, who enacted a suitable punishment.

"As pennance for your crimes against women, I decree that you become one yourself!" And so the handsome pirate became a beautiful young woman. "And your manhood may only be regained if you apply your considerable talents to the righting of wrongs! You have plundered and stolen much booty, for the benefit of evil men. Now, you are charged with the recovery of stolen booty, with returning it to aid the forces of good in Midgard!"

A year as a Tortuga serving wench indeed did much to instill humility in the rechristened Belinda Bigbooté. But recovery of stolen booty proved difficult - hard-bitten sailors of the 17th century would not follow a mere girl! Freyja observed this problem, and cast a spell to send Belinda to "where her talents could do the most in the service of good."

Said place turned out to be 350 years in the future, again in the care of Freyja herself (such oddities are taken in stride when you're a goddess.) In the 21st century, Freyja had become the patron of a group of mortal women, known as the Valkyries of Asgard. Granting Belinda custody of the mighty enchanted shovel Storskovl, Cap'n Booty would now have a chance to redeem herself.

Today, as the superhero Cap'n Booty, she fights evil with the Valkyries, while as Belinda Bigbooté, she owns a modern sailing ship at Talos Island, which she uses both to conduct salvage operations and for charter "pleasure cruises," usually with and all-woman crew and passenger complement.

Cap'n Booty seems well on the way to redeeming herself and regaining her manhood... yet she thinks to herself, with the pleasures of the continuing pursuit of booty and possessing booty of her own, does she truly want to regain it? 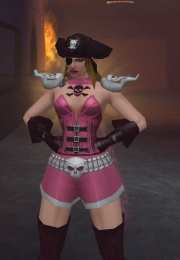 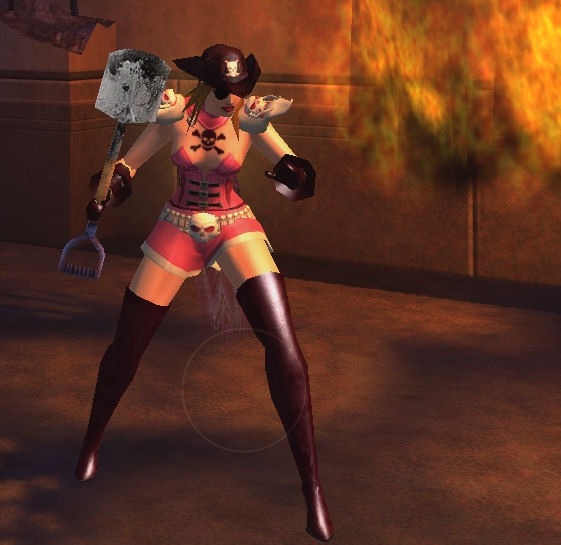