Caroh is frequently depicted as a habitual loner, somewhat brusque and apathetic. Her short life has been composed of numerous tragedies, and as thus she sufferers from some Post Traumatic Stress. Sometimes she lapses into a "berserker rage" while in close combat. In this state she lashes out with the intensity and aggression of an enraged animal and is even more resistant to psionic attack. This has added to her quick temper, and remorse for any un-necessary deaths while in such a state.

Caroh seems to enjoy her 'bad girl' image, and has showcased a impressive vocabulary of vulgarities that she has picked up in her short life. Very few have managed to get under the layers of personal armor to find her to be somewhat sympathetic, expressive, and with a deep need for repentance and acceptance.

Despite these character flaws, she is also very coy and has showcased a acerbic wit. She has long since realized the affects that her physical form has on others, and will tease interested men mercilessly despite her lack of interest. This behavior was apart of her early training.

Caroh possesses long, sharp retractable claws that she uses to claw at her prey. Her body re-generates quickly from injuries, making her a hard opponent to beat. Relative to a human, Caroh possesses enhanced agility, speed, reflexes, coordination, balance, hyper-keen senses, and superhuman acute night vision and sense of smell.

She was created using advanced gestational carriers and combined hybrid DNA. Her creators were funded by the Soviet government to create more advanced soldiers, and her project was merely a side note. Several others such as she were made, in futile attempts to 'play God' and failed. Later on, only three of her 'brood mates' survived to full term, she being one of them.

These hybrids aged quickly, walking and talking after only a few weeks old.

The scientists and agencies that funded the project found that these hybrids were also capable of advanced physical stamina, agility, and strength and so looked to turn their creations into something more profitable. They were subjected to advanced training in combat, as well as rigorous medical testing and experimentation to augment their already un-natural abilities.

The decision was made to enter these hybrids into the world of underground fighting, which was rampant in the Soviet Union during that time. These fights were normally to incapacitation or death, and the high rollers would come out to place bets on the winning subject. Both Caroh and her 'brood mates' knew that in order to survive another day, they had to win.

Later on in her life, as she physically reached puberty at the age of five she went through another series of surgeries to remove her uterus, ovaries and enhance her physical appearance. There were hopes that once her career as a caged fighter would end that they could sell her via the skin market for pleasure. They also found that once her physical appearance was more desirable, more would come to watch her fight.

The second female in her brood was sold off a year later after she began to preform un-desirably in the ring to a private party, presumably for pleasure. The male in her group was left to try and sire other hybrids off of a new batch of more advanced models. Caroh was left to fight, obsolete at the age of seven.

Luckily, she was sold shortly thereafter to a group of mercenaries who were seeking to help overthrow the soviet government in Russia. For the first time, she experienced freedom and was even given a name: Mephisto.

Mephisto worked diligently for the Marxmen for four years, working in a tireless effort to liberate the small country of Chechnya from the Soviet Union. Fighting fire with fire, she was among the front lines in the battle with the Russian military. Combat, strife, death and hate became a daily staple as she watched villages being raised to the ground as a “anti-terrorism, measure” as Russian President Vladimir Putin insisted.

For the first time, she felt as if she belonged to a family. She had a cause in life, to serve these people. She could kill a nameless person, and if it was for the good of the cause she would feel no remorse. Under her supervision, suicide bombers were trained and given orders. 'Filtration Camps' were destroyed, and civilians from outside the country were kidnapped and ransomed.

It was not until a chance meeting with a reporter from Great Britain, a woman by the name of Georgia Sinclair that changed her life. Georgia was a reporter working for Amnesty International who had managed to cross into Chechnya to report on the on-going war. She worked with Mephisto to to get various information about the atrocities going on there, to help spread the word.

The first time Georgia referred to her as a Terrorist, Mephisto thought she was mistaken. Though the more they spoke to one another, the more Georgia managed to make her see that she was the exact same kind of monster that she was fighting against. After Georgia wrote her article and sent it to be published, she was murdered in her hotel room. In a rare showcase of emotion and concern, Mephisto investigated the incident and discovered that it was her own commander who ordered her death.

Mephisto simply disappeared one night, and was never seen by the Marxmen again. 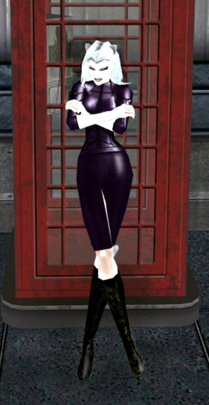 ‎Who says all cat-girls have to wear slinky clothing?

For the first time in her short life, she was completely on her own. She didn't know where to go, or what the world was like beyond the Iron Curtain. She began to roam anywhere her feet would take her. She visited many places, but everywhere she went she stood out like a sore thumb.

To survive, she went back to her old life as a underground fighter and found it nothing like the controlled, elite environment that she had remembered. There were no high rollers here, only peasants, drug dealers, and the desperate. No sanitary conditions here, only dirt floors splattered with the blood from the previous fight.

The more she fought, the less human she became. A year had passed and she was only a glimpse of her former self. She truly hit rock bottom during a fight where she lost control and in her berserker rage killed her opponent, and thirty other innocent patrons.

After she realized what she had done, she sought help in a local monastery of Tibetan monks. They knew all too well what atrocities this feral creature had committed, but yet treated her with a dignity and respect that she had never had before. They taught her that even a creature as low as she could seek redemption and salvation. They slowly brought her back from the depths of her depression, and with their blessings she set forth to find herself in Paragon City.

She took the name Caroh Sinclaire, and with really nothing more than the clothing on her back she trekked her way to Paragon City. Registering herself as a hero, she took to the streets to save as many lives as she could. She lived as a vagrant for a long time, pooling her resources into enhancements and straining her body to the limit of it's endurance. Eventually, her diligence paid off and she not only had a suffecient sum of fame and money, but also her own small super group, the Dead Man's Hand.

Caroh works primarily as a mercenary for hire, walking that thin grey line between a hero and a villain. Old habits die hard, and despite her tireless efforts to change she sometimes lapses into her old way of thinking. She will talk openly to villains, and considers some of them close friends.

She began to work as the right hand of a mysterious man named Fate, juggling her own work with that of his covert operations. A camaraderie evolved, but was strained due to not only his detached emotions, but also the fact that he was romantically involved with another woman. All jokes about 'Cat-Girls and their libido's' aside, she found him fascinating and it became hard to overcome the chemistry that was between them.

Regardless to say, after denying each other for months on end she and Fate ended up having a explicit affair. He had just ended his long term relationship, and was hoping someday to lead a normal life, which included children. At first, this greatly pained Caroh, since not only was she not human, but could not conceive. It was not until just recently that she discovered that her powers to regenerate included organs, and that she was pregnant.

Caroh and Fate discovered that their attraction to one another was more than just physical, and a honest relationship began to blossom. They decided to raise their baby together, and the child would take his name, Kasugano. Since then she moved to St. Martial, to better protect the being that has recently become the center of her universe.