((Placeholder for soon to be written Cobalt Strike article.)) User:Dorwaystudios

Jamison “Jack” Strickert was a brilliant young engineer and inventor. He worked for his father’s manufacturing company, StrikeTech, a leading technological pioneer among many in the 1990’s.

Following his parents’ deaths during the Rikti War, Jack inherited StrikeTech. Looking for a way to capture the imagination and advertising dollars in a competitive post-war market, Strickert designed and wore the Cobalt Strike armor. Originally a gimmick for trade shows and public appearances, Cobalt Strike quickly became a phenomenon.

Over time, Strickert found himself and StrikeTech increasingly the target of super powered villains. Receiving word of armored villains operating out of Paragon City, Strickert improved the armor with more powerful weapon systems and moved StrikeTech’s headquarters locally to investigate these rouge technologies and ensure his designs had not fallen into the wrong hands. He hopes the increased superpowered presence will help protect his investments from menaces while learning more about being a real hero.

Cobalt Strike is an employee of StrikeTech and had brief professional relationships with United Paragon and the United Sentinels of America. He has since settled in with the Guardians of the Golden Age and become a respected member there. 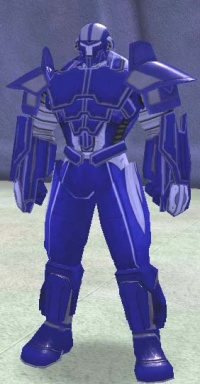 Strickert possesses the average strength of a man who engages in intense physical exercise. With the Cobalt Strike armor, he can lift (press) approximately five tons.

Strickert possesses no superhuman powers without his armor.

Cobalt Strike is the name of the sophisticated armor Strickert wears. With the armor, Cobalt Strike possesses many advanced weaponry systems, including a neutronic cannon, tachyon manipulation fields, and a positronic laser blast. He can shunt energy from one system to the next using his cybernetic relay systems installed in his headpiece. Strickert is constantly adjusting and improving the armor’s capabilities so its capacity is nearly unlimited. 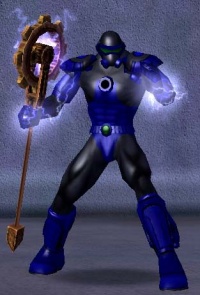