Crey Agent 006 exploded onto the PVP scene shortly after the release of City of Villains. First making her appearance in Bloody Bay, Crey soon earned respect and fear for her merciless tactics which included a battery of stuns, knockdowns and teleportation techniques. Mysteriously, Crey Agent 006 vanished from active duty soon after her legacy of combat was established. Sightings are rare but the stories of her missions remain well documented. 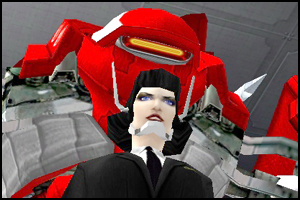 UPDATE: Crey Agent 006 has been deactivated.

- The following characters are further extensions of @CreyAgent

Crey Agent 006 possesses near Olympic level training in several fields of Martial Arts. Supplementing this intense understanding of close quarters combat, Crey also carries an arsenal of the latest weaponry and equipment. Appearing as a standard Field Operative, Crey Agent 006 has an alternate Paragon Protector Mode (Elude) which is reported to be extremely lethal and difficult to overcome. 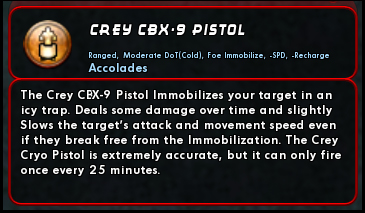 "Just one of the deadly weapons in a standard Crey field kit."