The mechanical being calling itself Crumplezone appeared in Paragon City with no explanation for it's origins in December of 2008 and has been hard at work playing hero ever since - despite glaringly obvious issues with it's construction, AI, or more likely both. Though appearing to be solid on first glance, closer inspection reveals that every plate and panel on the mechanical construct vibrates slightly; it's form not entirely stable. Armor plating continuously opens and shifts, showing glimpses of a strange color-shifting glow from the pulsing power-core within it's chest.

The X51 unit is an experimental US military automaton, with abilities focused on protection and support of human soldiers. The project involved attempts to backwards engineer alien technology and combine it with advanced robotics.. but met with repeated failures, and was eventually abandoned. The prototype, nicknamed Crumplezone, was assumed deactivated along with the rest of the line - but it seems stasis lock didn't last as long as intended. As a side affect of the attempted shut-down, Crumplezone's AI is damaged and its memory is purged of everything before it's reawakening. 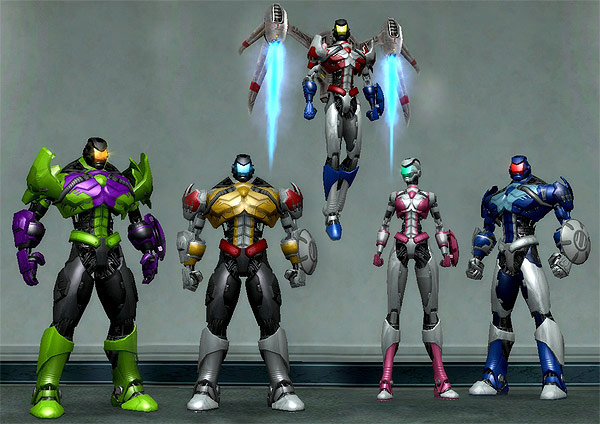 The five configurations Crumplezone can and does assume at random, go go mediocre photo-shop skills.

Brave and stubborn to the core, but eager to lend aid to other heroes, this personality is arguably the most dominant. It's not very bright, is easily confused, and speaks only in broken short phrases.

This mode shows the greatest concern for the safety of organic life, and displays the traits of a nurturer. It is smaller that other modes, but is the most likely to self sacrifice to protect others.

Rage-filled and lacking any regard for the safety of others, this mode is the most unpredictable and dangerous variation on Crumplezone's AI. It exists purely to destroy everything in sight.

Frail and slim compared to other modes, this variation is sneaky, dishonest, and completely self serving. It is paranoid and easily spooked, making it more likely to flee than fight.

As the only personality aware of the others, this mode usually refers to itself as "we" instead of "I". It is a brilliant mind who is concerned above all else with repairing itself... so far unsuccessfully.

Strength: Crumplezone is immensely strong - able to swing devastating punches, lift 5 times its own weight, and throw its body around like a wrecking ball without sustaining personal damage.

Flight: Every self respecting robot has thrusters and/or anti-gravity systems for flight capabilities... right?

Transformation: Intended as a way for the X51 unit to modify its body for different conditions, Crumplezone's is just one glitch piled on top of another and is locked into five distinct configurations.. with distinct personalities of their own.

Heavy Armor: The construct's outer body is plated in thick insulating armor, rendering it extremely durable against impact and blunt force, as well as able to cope with more extreme temperatures than a human could endure.

Flame Throwers: Because sometimes punching just doesn't cut it, a set of these are installed in the automaton's gauntlets.