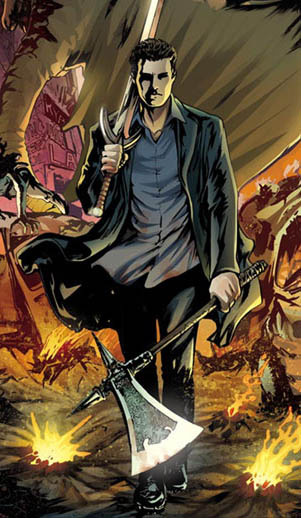 Make sure she knows..

With a quick nod, Sarah was off and running with Robin and Paola on her shoulders, Chloe had tried to help, but her ice pillars were cracking under the immense weight of the failing fortress. It was only him, his strength alone was holding back the flood of rubble above him, and that's all he could do.

Five more seconds and they'd be clear of the wreckage, they'd be as safe as he could ensure. The seconds of agony dragged on as he could feel his muscles failing. Four. Chloe had cleared the threshold, along with Wraith. Three. The words he spoke, he had to say them. She had to know. Two. He wasn't making it out of this. The prophecy had come true, he did play his part, and he was being given his reward. One. Sarah had crossed the threshold, Robin and Paola safely in her arms, they were clear, his job was done. Zero. Death.

The fortress collapsed, falling in on itself. Weber gasped, Chloe screamed, even Jonas and the cold-minded Wraith had taken a moment to look back. The floating fortress plummeted down, past the rock outcrops they'd climbed up here on, down to to the ground below. With a final crash and the expelling of an enormous cloud of debris, it was final.

The portal closed as Jonas stepped out. He just needed to make sure that they all made it through... all of them but one. Sil was screaming frantically into her comm, trying to find Nick, trying to make sure that what they'd just done wasn't for nothing. Wraith had taken off, his body badly needing repairs. Chloe was cold, stunned, still trying to take in what just happened, her mental calls unable to reach David. Paola just sat there, lost in thought, mourning over Robin's lifeless corpse. This was Robin's day, he'd earned every bit of the respect they felt for him. He'd sacrificed himself to save the book, to save their salvation.

A familiar voice over the comms, Drake was alive! The struggle hadn't been for nothing. They had won... but at what cost? This is what seemed to disturb Paola the most, and it was then that realization hit her. Her eyes glowed red, her claws extended as she leapt up from Robin's body, looking for something, anything to blame. Her eyes quickly scanned the group and fell on her scapegoat: Sarah. Paola leaped at the younger vampire, ready to tear her to shreds, Sarah wasn't ready, she acted on impulse, on reflex, her training had taken over. With a quick flick of her wrist, a stake was in her hand, as it moved gracefully toward her elder's heart. Just before the moment of impact, Robin pulled Paola out of the way, the stake missing it's mark entirely. Robin and Paola fell to the floor. He'd saved the day again.

Robin was alive! He was coughing up black ichor, spilling it all over himself and Paola. The tendril that pierced his chest was poisoned, but by changing the timeline, Robin was brought back to them, the poison being expelled from his body. Ignoring the ooze, he quickly acted, running his fingers through Paola's hair. This seemed to calm her as she fell into an almost catatonic state.

But what about Adam? Sarah suddenly lit up the comms, screaming for Adam. She was frantic, he wasn't answering. She became more frantic, calling his name again, and again. After what seemed like an eternity, he answered, groggy, but alive. He had been sleeping again. Sarah dismissed her actions and let him go back to sleep. Adam was alive as well, and with no memory of the events. Everything seemed to have happened just as they had planned. The world and Adam had been saved. With this realization, they lifted themselves up and headed to Paola's Haven. They all needed a rest after this night.

Darkness, nothingness. Is this what death was like? No Sound, no light, no... "Ow!"

David had tried moving his body and felt the tinge of pain in his back. He was laying on something very uneven, probably the rubble that had collapsed around him. In fact, now that he thought about it, he could feel the pressure of the rocks bearing down on him, but not everywhere on his body. This was strange. He decided to move his arm to feel what was around him. More pain. "Okay, that's not going to work," he told himself as he realized his right arm was pinned under even more rubble. The utter darkness and pain all over his body was making this very frustrating. With a sigh of resignation, he decided to try moving his left arm instead. That worked! His left arm wasn't pinned. He used his hand to trace over his body, seeing what was left of him.

The news wasn't too bad, sure his prized leather coat was probably ruined, but anywhere he wasn't feeling pain was still there, and anywhere he was feeling pain was covered in rubble. "I guess that's not so bad," he said unconsciously out loud, "I'm just trapped and pinned in total darkness. Could be worse." With those words a small realization came, a small glimmer of hope. Why wasn't all of him pinned down? He used his free arm to feel the area around him, feeling the small, lightless cavern which was his new home. If only he could roll over or adjust his position slightly, a particularly uncomfortably shaped piece of rubble was digging into his back. After a few moments of feeling around, he came to the realization that the falling rubble had indeed fell in such a way that it had created a small pocket around him. But again he was trapped, and with not much blood left in his body either. He'd used so much in the fight with shade, and even more when he was allowing them to escape. Then the thought cam to him. Chloe, Sarah, Wraith, Jonas, Robin... Paola... did they make it out? He knew they weren't in the fortress when it fell. But did they make it back to the portal and out of the Shadow Shard? There was no way to know. Not from here anyways.

As his thoughts wandered on about his friends, eventually they came back full circle. Why hadn't he died? Wasn't that the prophecy? Fight in the Apocalypse, change the world, die in the process? But he wasn't dead. He wouldn't die, not from this. He'd probably last another day at the most without fresh blood, but that wouldn't kill him. He'd just fall into torpor, and sleep away eternity. There was no getting out of this, and even though he knew his friends were determined, there was no way they would be getting enough construction equipment into the Shadow Shard to remove this rubble and find his entorpored body.

The thoughts drug on with the hours. the darkness, the silence, and that damn piece of rubble digging into his back. He'd just resigned himself to the thought of never seeing them again when a sound broke through the silence. It was avery quiet sound, but it was sound nonetheless. A faint buzzing on the other side of the rubble no more than fifteen feet to the right, no above him. Something was buzzing and clicking above him.

Then the smallest crack of light and the sound become almost deafening compared to the silence. Then he saw it, probably the worst thing that he could have seen. A huge, hulking Something. It was vaguely humanoid shaped, but with a massively deformed clawed arm, and a bright jewel in it's forehead. Most of the rubble over David was one large piece, luckily for him, and the brute had just removed it. Seeing this opportunity, David sprung to his feet and darted past the brute, he was in not in the shape to be fighting something like that. Then things got worse, he saw what was making the buzzing, nattering noise; another something. Again, it was vaguely humanoid shaped, but was much smaller and wiry than the brute. It had insectoid wings and seemed to be made of living and geological matter. David skid to a halt, and ran in another direction. If he stopped to fight this thing, the brute would have time to close on him, but almost as soon as he had started running, he stopped.

Another something was blocking his way. A giant eye. A floating giant eye. A floating giant eye inside a mouth. A mouth, just a mouth was floating there, with an eye inside it. Angell was surrounded. The three things started to encroach from all sides. The fight was imminent, no choice. life or death. With that realization, Angell did something drastic. Bearing his fangs, he leapt at the eye/mouth thing, sinking them into it. His gamble had paid off. The thing had blood, and so much power in it's blood. The power was intoxicating to the point that the brute slamming into his back at full force didn't even faze him.

He drained the thing dry in a matter of seconds. Then turned, the power coursing through him, the power too much to contain. But it had done something else. He was clearly able to see these things' auras, was clearly abel to see what they were. Able to read their thoughts. David knew what they were going to do before they did. Somehow these things communicated telepathically and David was keyed into that network. Obviously a side-effect of drinking psionically-charged demon blood. The power overwhelmed him, and he went into a frenzy.

In a single moment, David had regained his sanity. The three things which had found him were torn to pieces around him. The empowerment he felt to his Auspex was fading fast. The effect was only temporary. He used the power he had to search his subconscious, to find a connection, a connection he knew was there. The power was fading quickly and he had to find it fast, he hoped that even if the portal had closed the connection would still be there. It had to be. She wouldn't sever the connection. It had only been a couple of days. She wouldn't sever the connection that soon, would she? She had to know that he was alive. Someone had to know he was still alive. Then he found it. Without hesitation, he used the last of this power boost to send a message, to tell her he was still alive. But only one word would make it:

Chloe looked around for the source of the voice she'd just heard. Was it real? Was it David? Was he still alive? She looked around Paola's room. Ani and Robin were taking care of Paola. She was still catatonic, barely an hour had passed since the portal had closed.