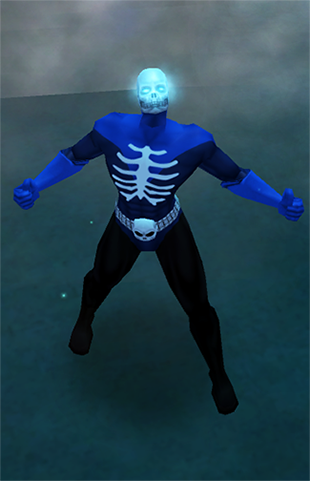 Born in Kings Row to parents who couldn't care less about him, Mickey O'Connell was convinced he was bound for a life of poverty and despondence. The only real attention his parents showed him was their insistence that he get a job and provide for the family. He was eight. So he created his own surrogate family of fellow street kids born of similar circumstance. Miscreants with no real ambitions outside of having fun.

He became a burnout in high school after low test scores convinced him he was unintelligent. He lacked any sort of aspirations. He didn't want to be an astronaut or some fancy doctor so he dropped out before finishing senior year and entered the work force early. Half a dozen menial jobs, from dish-washing and waiting tables to moving furniture and everything in between. The last real job he had was working as a janitor at a local boxing gym. He got pushed around by some of the regulars but he never fought back. He didn't want to make waves because, after all, he needed the money.

"These jokers thought just 'cuz I was sweepin' floors, I was just some dumb putz."

One day, as a gag, one of the regulars invited Mickey into the ring. He tossed him a pair of gloves and bet him he couldn't land a legitimate punch on him. The bell rang and ten seconds later, the guy was flat on his back, with no idea what had just happened.

Mickey was no stranger to fighting. Sure, he'd gotten into his share of scraps over the years. But he always fought to get out of trouble. For some reason, it never occurred to him he could actually get paid to do it. So when he actually started training, he (and the regulars at the gym) saw he was a natural in the ring. What he lacked in grace, he made up for in speed and power. He got knocked down plenty but he always managed to get back up.

For the first time in a while he found he was able to live instead of just survive. But eventually, after racking up so many wins, fighting local schlubs only made him so much money. So when a couple of mob guys approached him with a "job opportunity" he decided to hear them out. Throw a few fights here and there and make some real dough, they offered.

"I mean, I didn't get into boxing for the glory or to get famous. I did it for the money".

So he accepted. And he didn't feel bad about it. After that first time, he found himself holding more money than he'd ever held in his entire life. Far more than the winner's purse for any fight he'd had before. He was finally able to get out of debt. All from taking a dive. And it went on like this for a while. He'd win a few fights, maybe go on a real tear, and then throw the big one and get a cut of the profits. Life was good.

"And then came Lenny 'The Iceberg' Bergman..."

Bergman was responsible for Mickey's pal Manny getting sent upstate after he bailed on a bank job. He cut and run while Manny took the fall, then he went around town, bragging about the score he made. And now Mickey was supposed to take a dive for him. Like hell he was. But his "benefactors" insisted on him going along with the plan. He didn’t. Mickey won by TKO in the second round. Now he owed the mob big. Unable to pay them back after buying a new car, Mickey was running out of both time and options.

Luckily, fortune smiled upon him as he happened to run into an old friend one day at a corner store. Gino Gargano was a two-bit con artist Mickey had known back in the day. The two caught up and eventually Mickey told Gino about the bind he was in. Gino offered an interesting solution: Join a gang.

"Of course I knew about The Skulls. But I just thought they were some weird biker gang who sacrificed goats or something. '

Gino had somehow fallen in with the gang years ago and insisted that not only would they provide protection from the mob, but Mickey would be able to make just as much, if not, more money working for them as opposed to the mob. With few other options and still nursing a couple bruised ribs from getting worked over by some of their goons, Mickey agreed. He had no idea what he was getting himself into.

As part of their initiation, new recruits are ordered to kill a target in a rival gang and were then taken to choose their own casket. They then must dig up a grave and take the front of their dead victim's skull as the mask that will make up their new 'face'. Mickey had no problem taking out one of the mob guys who'd been hassling him. It was the second part of the process he found kooky.

Now a full blown member of The Skulls, Mickey found that Gino had been right. The mob's goons never bothered him again after that. Unfortunately, Gino had been greatly exaggerating about the money part. He discovered The Skulls were little more than thugs who obsessed over death, and Mickey had absolutely no intention on dying for that gang. But Gino maintained things would get better as he moved up the ranks. To show him, he dragged Mickey to a warehouse on the fringe of the city to witness some big ritual. Apparently, one of the big guys was moving up by attaining immortality. An intimidating bruiser named Coffin had summoned a bunch of them to "bear witness to his ascension". Mickey didn't buy into all of the hocus pocus. Until he got there, anyways. 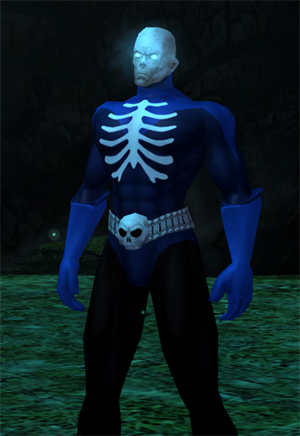 The gang had strung up some young girl on a beam. She couldn't have been older than sixteen. There was a circle of ash around her feet while the Bonebreaker circled her, chanting some mumbo jumbo. His eyes rolled into the back of his head and as he raised his hands Mickey saw that he had a knife. Now he'd done a lot bad things in his life. But partaking in the sacrifice of some kid was where he drew the line. Out of instinct, he leapt out of the crowd watching the ritual, pushed the girl out of the circle and decked Coffin. Mickey inadvertently stepped inside the ash circle and a ring of fire surrounded him.

"I barely remember what happened next. It was dark. Dark and hot. I heard birds. Crows cawing. Then everything went black."

He awoke in his apartment to the sound of Gino shouting at him. He told him that after he stepped into the circle, the whole warehouse went up in flames. Everybody scrambled and in the chaos, he'd thrown him the back of his car and drove him all the way home. Gino warned him he hadn't escaped unscathed, then he handed him a mirror. He looked like a zombie from one of those old movies. How he was still alive, he had no idea. No. He wasn't alive. Somehow he just knew. Testing his hunch, he threw himself off his apartment building a couple days later and found he didn't die. He broke almost every bone in his body and caved his head in, but he didn't die. He just... walked it off.

In the weeks following his "death", Mickey found that regaining any semblance of a regular life was nearly impossible. No one wanted to hire a corpse to do anything outside of entertain Haunted Houses on Halloween. And he'd had his fill of crime. Getting busted and spending a literal eternity in one of those super-max prisons was wholly unappealing. Then he found out he could get paid to punch people.

"It's just like my old job, except these guys are weirder and hit harder. But you know what they say." It's a living."