Death Shrieker is a founding member of the Midnight Syndicate of the Rogue Isles, a loose organization of fellow criminals, many determined to rule the world, this dimension, etc. Death Shrieker herself has less lofty goals and is content to bring about misery and death to others, furthering her reputation as a spirit of vengeance.

While Melissa did not know of her origins, or the matter of her death, she was a spirit of vengeance, bringing what she dubbed her “Song of Death” to as many as she could. After she uncovered her past, she became more of a spirit of sorrow, her mournful wails no less deadly, however she was more content to keep herself to the shadows and night of more typical places for ghosts. Melissa was touched by love, a strange enough event within the Rogue Isles, but it was within her own organization. Anti-Kitten, whom she considers her one and only friend married and the ceremony touched a rare cord of compassion within the Undead spirit of the Ghost she had become.

Song of Death or Sorrow

When the revenant know as Death Shrieker first came into being, her song was that of death itself, and any who listened too closely would sucome to its deadly nature. These “sonic” powers she developed were mostly due to her former profession as a lounge singer, but carried over into her Undeath. Once she learned of her origins, the songs took or the mournful tone of one of sorrow, which mostly had the same effect on those who heard its tragic melody. Her different wails, the one of Vengeance could shatter steel, while the one of Sorrow, would cause the subject to simply, give up on life.

Shadows of the Underworld

Death Shrieker could also manipulate the very shadows, cloaking herseilf within them, or using them to steal the warmth of the living which could lend herself temporary freedom from the unnerving cold of being dead. Eventually Death Shrieker even managed to form the shadows into a temporary companion under her control.

Being another strong spirit within the Rogue Isles, it was only a matter of time before she came to the attention of Ghost Widow, her patron among Arachnos’ elite. She taught Death Shrieker how to capture spirits within a painful hold, how to use the spirit stuff she collected into a rudimentary protection, and even allowed her the use of one of her legion of Fortunatas. This only caused Death Shrieker’s power and reputation on the Rogue Isles to grow.

As a Ghost or even Revenant, whichever one classifies her as, she has certain innate abilities. She can defy gravity and fly, turn invisible and even turn intangible and pass through solid objects. It is not her natural state however, that and the manner of her death have caused many to classify her as a Revenant rather then a Ghost.

Melissa’s prime vulnerability comes from spiritual and holy energies. As such priests with a strong faith, spiritmancers and other mystics are her most dangerous foes. Artifacts that harm insubstantial creatures are extremely painful for her and the staggering amount of Axes that has filled the Rogue Islands are a point of strong concern to her. She believes herself to be immortal but can be caused pain. When faced with too much pain to absorb she will fall into a unconscious state, become entirely insubstantial and invisible and awaken some time later in her hidden lair. 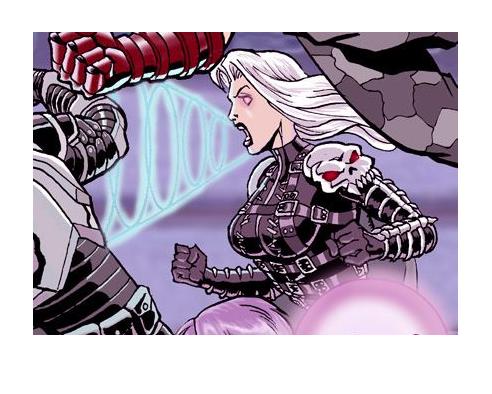 Melissa Turner grew up the only child of second generation Steel worker Richard Turner and his wife Helen. Melissa loved to sing as a child, and brought delight to her parents many a night while she was growing up. She begged her parents to attend a proper music school, but a Steelworker from King’s Row did not have the money for such a thing. And when Melissa turned 16 her father was killed by Clockwork that had tried to take over a building he was working on to construct one of their bizarre creations. Helen and Melissa had a hard life from that point on. Helen, who had never worked, found it hard to find a job that would pay all the bills, and Melissa was forced to begin working before she graduated High School, and eventually had to drop out due to more and more demanding hours. Her mother died 4 years later, at least her body did. Shot to death during an attempted mugging, for a mere $13.75. In truth Helen had died inside the same day she lost her husband, but tried to go on for Melissa’s sake. Now, on her own and working a dead end job as a waitress she got what she considered her big break just one year later. The man who would become Melissa’s manager and lover came into her life. Michael “Big Mike” Donaldson was her ticket to the big time. He quickly got her a singing gig and the same nightclub she used to waitress in. About six months later he called in his :”marker: from Melissa. That was her first night as an “escort? “ for one of Big Mike’s out of town business partners. She kept up her end for 5 long years, being the tramp that Mike wanted her to be. One night, the dreams of the little innocent girl she used to be got in the way, she said no to Mike. What she couldn’t know is that Mike allowed no one, to say no to him. The knife that ended her life that night, she never saw coming until it was too late.

The body of Melissa Turner was originally an unsolved murder, after all what is the death of one more tramp in King’s Row? No cop even took and interest in the case and soon it was buried amidst a tone of other unsolved cases that would likely never see the light of day. 6 months later a doctor at Paragon University requested a corpse, and Melissa’s was the one sent to Steel Canyon Medical Center. She first awoke to her Unlife there and promptly took the life of the overnight orderly. Her short rampage was brought to and abrupt halt by members of Paragon City’s Hero Community. Melissa, called Death Shrieker by the press, was sent to the Zig, and not having discovered her true potential wasted 8 months there locked up, until Arachnos staged a huge break out that she was lucky enough to have escaped in. The lost soul known only as Death Shrieker knew nothing of her past at this point, she only had a burning need for revenge on the living. She was so cold and hated the living so much, that it often times drove her almost to madness. She terrified others often taking lives for the pure joy of it. As her powers grew and the other members of the Midnight Syndicate followed their personal goals, Death Shrieker’s chief rival, Grave Master made little secret of his desire for leadership of the organization. Personally Death Shrieker could’ve cared less, but she did not want to appear weak, so she held onto control of the group, defying Grave Master to make his move. Death Shrieker found purpose in this, looking for things that could harm, or even destroy her rival. The Circle of Thorns ended up being her usual targets. Eventually she came under the eye of Arachnos’ first lady Ghost Widow. Seeing more opportunity Death Shrieker accepted her offer of patronage, furthering her own powers and eventually costing Ghost Widow a chance at becoming human once more. It was during this period that Death Shrieker came across the Interdimensional Club known as Pocket D. A forgotten memory from her original life caused her to be drawn to the club, spending time there even though she did not, could not, partake of many of the club’s diversions. It was here she met a hero of Paragon, who surprisingly wanted ot help her uncover her past. It took time, months actually, but eventually this hero came to her with the evidence of her former life and how she had died. This combined with the earlier marriage of Anti-Kitten and Commander Freedom had a profound effect on her, causing her to now fall into fits of depression and melancholy which it was almost impossible to bring her out of, and when she became more of a spirit of sorrow then vengeance. Her cold and lifeless heart had been touched by the love Anti-Kitten had shown, as well as, the forgotten dreams of her former human self. Now a days Death Shrieker can be found deep within her secret lair, within the dark hidden areas of it, humming a haunting melody, singing softly or just brooding over her own dark fate.

What is described in her history after death actually happened in game, and yes a hero really did help her discover her past, and no I don’t remember his name, I sure wish I did.

Death Shrieker is offered a chance at redemption for her sins, so she in effect became my very first Kheldian Radiant Indemnity.