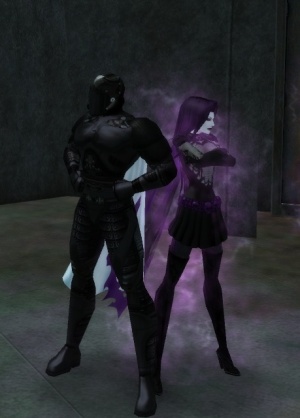 Little is known about the man called Dr. Nil as much is gleaned from comments made by the Dr. himself. He claims to have been one of the top researchers for the Crey Corporation in the field of high energy physics. Dr. Nil purports to be the creator of the forcefield technology utilized by Crey Juggernauts, Longbow Ballista and Sky Raider engineers.

Dr. Nil claims his origins as a cyborg lie in injuries recieved in a gun battle between Crey security and Longbow, to whom the Dr. was trying to sell the forcefield tech. His stated motivation for the sale was the dissolution of his retirement fund, which was channeled into another Crey weapons project.

Dr. Nil's first recorded appearance was during the Ziggursky Prison escape. Records show he was detained there under heavy guard, his motor functions deactivated, dormant on minimal life support. Dr. Nil has stated that he was apprehended in the process of systematically deleting all remaining information regarding his previous identity; including the murder of several associates and the destruction of a Crey secure facility.

Since then Dr. Nil has risen to become one of the Rogue Isles most feared residents.

Dr. Nil is polite and well spoken. He is especially cordial to friends and allies and is always willing to offer aid in the form of his technical expertise or raw power if requested. Dr. Nil is somewhat alienated from the villain community on the whole as he has a frequent and outspoken disdain for villains with complex ideological motivations. Dr. Nil has also stated that he regards the hero-villain conflict as essentially a game and thus dislikes removing the players from the board on a permanent basis. He is surprisingly merciful, although certainly not to all.

Dr. Nil is currently a member of RAGE where he operates at the rank of Crime Broker. He is a former member of The Robot Empire, The Illuminati Spiral and APPARAT.

Dr. Nil can be frequently found working with the all-female villain group The Jaded Angels as well as RAGE sub-group FRIGHT. He has allies among the Morai and Scurvy Dogs. Dr. Nil has been observed to have friendly relations with the Sky Raiders and Goldbrickers. He has a paternalistic friendship with the Freakshow as well. He is nominally allied with Scirroco and the Mu, although his relationship with them is strained.

Dr. Nil has stated that his most hated foe is the Circle of Thorns. It is widely known that he at one time attempted to sink Sharkshead Island in order to destroy Circle enclaves beneath the island. His closest allies are aware the Dr. Nil carries the Mu genotype. Dr. Nil has repeated clashed with the heroes Aurora Borealis, Infernal and Positron. He has been observed attempting to start technical discussions with Positron in the midst of battle and regards him as a friendly rival. For reasons unknown Dr. Nil despises Silver Mantis and never skips the opportunity to battle her. He does not seem to bear any particular ill will toward Crey and Longbow and will generally 'go easy' on both groups in combat.

Dr. Nil's primary 'power' is control over a squad of six combat robots labeled 001-006. These machines are armed with particle beam cannon, ion guns, flamethrowers, seeker drones, and rocket launchers. Dr. Nil's support robots are able to perform repairs on the others in the squad and are equipped with force field projectors. Dr. Nil carries a particle beam rifle.

Dr. Nil's cyborg body is equipped with powerful forcefield generators of his own design. This system is capable of generating a near-invulnerable forcefield, dispersing attacks, repelling and imprisoning foes.

Dr. Nil chose Scirocco has his patron because of their similar temperment. He can has mastered Mu lightning magic and is capable of weaving spells to protect himself, imprison his foes and attack with electrical energy.

Dr. Nil and his robots can fly utilizing high compression jets in their mechanical legs. Dr. Nil possess a universal medical device which he can use to heal himself or others.

Dr. Nil is not as skilled in computer programming as he is in other fields. His AI program confers roughly the intelligence and personality of the average German Shepard. Dr. Nil must monitor his robots in combat and keep tight personal control over them. Perceptive foes in the past have managed to distract Dr. Nil while luring his robots away to chase designated foes, leaving the Dr. vulnerable.

Dr. Nil's power supply is unstable and can be depleted in prolonged combat.

Dr. Nil's cyborg body is based on the reference design for the Omega Bodyguard program that created OmegaPrime.

There is one piece of evidence linking to Dr. Nil's past identity that he cannot account for, his coffee cup.