Dragonfly (Michael Holm) is a fictional character and superhero currently played on the Virtue server of City of Heroes. First created in 1998, his original concept of someone without superpowers but able to fly with the aid of a mysterious backpack has evolved to that of an enhanced cybernetic costumed hero with many innate super abilities.

Michael Holm was adopted as a baby to parents living in Hartford, Connecticut. An only child, he excelled in several subjects, particularly biology, engineering, and athletics. He maintained a 4.0 GPA while at the same time becoming a star member of his high school's gymnastic team. On his 18th birthday, he found out his biological father, a man he'd never known named Franklin Maxwell, had died in a helicopter crash. Maxwell was the founder of ReFlex Medical Systems, Inc, one of the largest and most successful manufacturers of human prosthetics and artifical limbs in Paragon City. In his will, Maxwell had bequeathed his entire company and great personal fortune to his only son.

Holm moved to Paragon City to assume responsibility of his father's company. While investigating the accident that killed his father, he discovered evidence of foul play. He also stumbled upon A.L.P.H.A., an artifical intelligence housed inside a secret laboratory inside Maxwell's office. Working as a team, they determined the crash had been caused by ReFlex's vice president, the ambitious Dr. Martin Shuster.

Holm attempted to confront Shuster, but instead was beaten almost to death by his thugs. A.L.P.H.A. managed to intercede and eliminate them, then performed surgery on Holm to save his life. His entire body became cybernetically enhanced through the process, granting him superhuman-like abilities. After recovering, he attempted to meet Shuster again only to find he had transformed himself into the Electric Dynamo. After an intense battle, Dynamo escaped. He would become Dragonfly's most notorious arch-enemy, reappearing occasionally to cause further trouble. 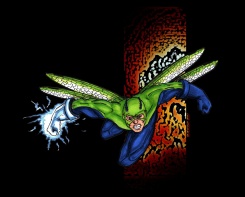 Dragonfly gained a number of superhuman powers as a result of the cybernetic enhancement surgery performed on him by A.L.P.H.A. in order to save his life. His primary power is the ability to fly due to subdermal anti-gravity repulsors implanted into his torso. This allows him to propel his body is virtually any direction, and he does not need to orient himself or face any particular direction to do so. By pushing himself, he is able to fly at nearly the speed of sound.

Proton condensers implanted in his wrists allow him to project beams of energy from his hands. They work by ionizing proton energy in the environment around him and storing it until channeled in a directed fashion that causes concussive damage against his targets. The power of this can vary widely. He can shoot anything from a simple tiny beam that feels like a light tap on the shoulder, to a massive energy discharge capable of creating a large explosion. This energy has also been known to disrupt unprotected electrical systems.

Dragonfly has subdermal armor protecting all major areas of his body, rendering him largely immune to gunfire. Much of the bone and muscle tissue in his arms and legs have been replaced with durable mechanical components, increasing his overall strength, agility, and speed to superhuman levels. Despite these enhancements, none of his cybernetic components can be seen by the naked eye since layers of his natural skin and muscle tissue was retained and reapplied during the surgery. This allows him to keep his condition a secret to the world (although fights that cause severe cuts or scrapes in his skin may expose areas of chrome).

Several of Dragonfly's internal organs were replaced, mostly to keep his body's normal functions operating as they should. This includes his lungs, which have a built-in chemical filtration unit that protects him against potentially poisonous gasses (however, substances that attack the nose and throat may still affect him). His new lungs also protect him from severe changes in air pressure, which is useful for someone who can fly at extremely high altitudes. Dragonfly's eyes have also been enhanced. He can see with crystal clarity up to several miles away. His cybernetic eardrums can also pick up faint sounds from a great distance, although he usually has to be intentionally listening for something in order for this to activate. Once he receives a soundwave, translocator implants in his skull can triangulate the exact location of the sound's source, allowing Dragonfly to locate it more easily.

All of Dragonfly's implants have been shielded from electromagnetic energy, keeping him safe against magnetism and EMPs. A basic electric shock will still affect his organic tissue, however.

With assistance from A.L.P.H.A., Dragonfly is trained in hand-to-hand combat, and is highly skilled in the use of his superhuman powers in combat.

Dragonfly wears a highly flexible yet resilient skinsuit that helps protect him from pressure force, heat, cold, and electricity. The experimental material it is made from was originally developed at one of ReFlex's laboratories to aid patients with prosthetic limbs with their recuperation. The boots and gloves are also made from this same material, although they have been specially modified to facilitate the use of his powers.

A.L.P.H.A. - An secret artifical intelligence created by Michael's father designed to study and assist with the creation of cybernetics.

Karyn Kirkpatrick - Michael's secretary and personal assistant. She has a flirty relationship with him but they often find themselves unable to persue it further.

Dragonfly has a rogues gallery of outlandish supervillains, but has also faced more ordinary enemies such as gang members, mobsters, and assassins. His most well-known nemesis is the Electric Dynamo, a robotic cyborg who weilds electricity as a weapon. Another formidible adversary is Hannibal Morrigan, a powerful and corrupt CEO and criminal mastermind. Other recurring antagonists include Cyclone, the Ram, Black Jack, the Exploder, Tantrum, Biohazard, the Toy Collector, the Berliner, the Earthworm, and many others.