The character of Edward Ville began for me as a cheap pun with his initials; E. Ville. I recreated him atleast 5 times, but I finally got it right once I made him a mastermind. Nasty early levels, but I've been obsessed with him ever since he got the Assault Bot.

Edward Ville is a very easy-going person, although he can get serious when he needs to - especially when his friends are in trouble. His uncanny, if not a tad cliché, ability to keep cool in nearly any situation allows him to concentrate on the task at hand - which usually happens to be anihilating his enemies with the help of his battle drones and his fiancée Brooke - who always goes with him into the field, piloting a deadly assault suit.

His attitude towards his enemies doesn't seem to differ much from his attitude towards his friends; always confident and content. When it comes to Brooke, however, he is romantic and affectionate. He doesn't go out of his way to protect her in battle, knowing that she's well-equipped with flamethrowers, missile-packs and plasma-blasters.

Against his arch-rival (and failed experiment), Lab Rat Rifleman, he becomes vile, wicked, and ruthless. Although small, Lab Rat poses a great threat, having the same amount of knowledge with technology as Edward, and he treats her as public enemy number one.

Even as a 14-year old boy, Edward was a genius. And his friends loved him for it. Nearly every weekend, Ed and his crew would stage an elaborate prank on their fellow classmates. This 'crew' consisted of: Rocco Stephenson, Dominic Parsons, Alicia Curtis, Bridgette Stanford, Joseph Castillo and Brooke McKay. Life was great for them, especially for Edward and Brooke, who even then were highschool sweethearts. Nothing could take them apart, until they were caught in the crossfire of a super-powered showdown, between the Great Sphinxus and Malum-Astrum.

They were hit by a stray blast of Nictus energy, fired by Malum-Astrum, and the whole gang was sent flying. Edward and Brooke were a bit further away from the epicenter of the blast, and thus didn't get by the full force - but Brooke got hit with more than Ed did. He was the only one who wasn't knocked unconcious. He immediately called 911, and they were taken to an emergency meta-human ward in the local hospital. Other than Edward, the whole group was incapacitated. There was no cure at the time, and it was just a matter of time until they died.

That was when Ed got his brainwave. He presented his plan to no one but himself. For it was far too dark for any mind but his own.

The Only Way to Save Them

With the exception of Brooke, who was just found to be in a coma, Edward created several medical robots to transfer the nervous system of his comrades into robotic shells, allowing them to walk, talk and, in a way, live. It mattered not to them what kind of a live they led from then on, it mattered only that they were able to live at all.

He became a social outcast, having nobody to turn to. His friends were robots, and he couldn't risk exposing them to the public. He had no idea how he could take care of Brooke, and he didn't feel like presenting the whole dilemma for his parents. So, he did the classic thing for an outcast to do - run away. With the help of his friend-bots, he took the still unconcious Brooke and travelled to the Rogue Isles, settling on an uninhabited island. He built a mansion with the island's resources, and set himself on robbery and theft to acquire the resources he needed. His estate was incredibly well-defended. Nobody could get inside but him. And that was important, since Brooke couldn't escape with him on his various adventures.

He lived like this for four years, continuously adding onto the mansion, renaming it Fort Ville, and eventually Ville Tower, which became the headquarters of VilleCorp. After time, his creations became more balanced around destruction, and his weapons became more and more advanced. So much, that he believed himself to be unstoppable...and the thought was not far from the truth.

Four years after he ran away with his beloved Brooke, she finally woke up. Edward had already replaced her bones with a symbiotic metal when she was unconcious, so that she would remain relatively unchanged. She woke up in a comfortable bed in the sub-basement of Ville Tower (which was really just Edward's private living quarters, away from the business aspect of the Tower), with various high-tech medical devices that kept her alive. She got to her feet, looking about the new surroundings. Brooke had never seen this place before, but she seemed to know her way around.

Meanwhile, Edward was perfecting incredibly life-like android replicas of his fallen friends, which he'd be able to transfer their nervous systems into via teleportation. Unbeknownst to him, Brooke was standing in the doorway, a sly smile on her face. She'd found Ed's bedroom and was wearing some clothing she'd found in his closet, having nothing to wear herself but a sweater and pair of jeans meant to fit a 14-year old girl. After an emotional reunion, the two set out upon designing a heavy assault suit for Brooke to wear in the field - she wasn't about to go run into a battle wearing her school clothes, after all.

Ever since, VilleCorp has grown and become more powerful, and Edward and Brooke closer together - especially when they get to blow the stuffing out of superheroes with heavy weapons.

Edward Ville's custom Heavy Combat Armour (HCA) was designed by Brooke, being an exceptional artist. His HCA is similar to a standard VilleCorp operative HCA, except totally customized to his look. 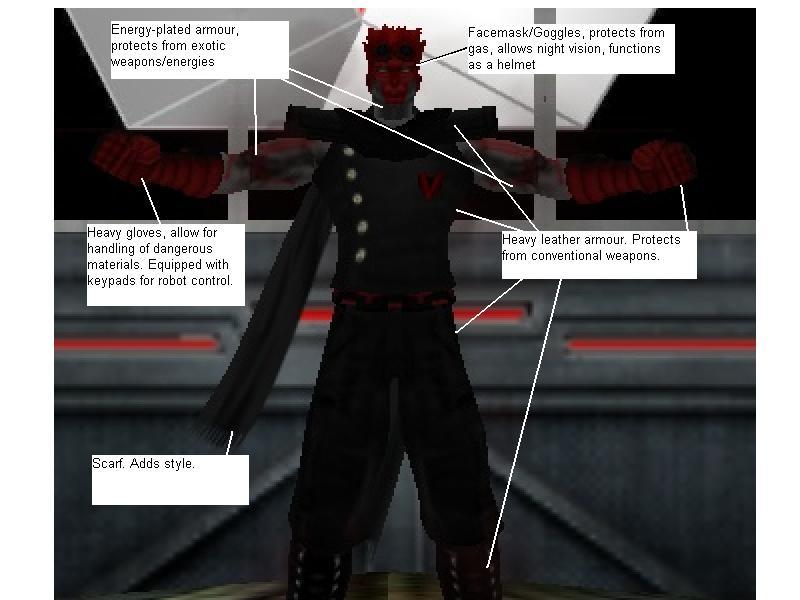 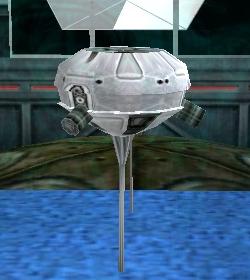 This high-tech Force Field Generator allows Edward, Brooke and the battle drones a lot of defense in the field. Designed from stolen Sky Raider blueprints, the generator is highly mobile and is one of Edward's most essential tools.

The Acid Mortar is used by Edward to weaken his enemies. It fires grenades loaded with corrosive acid that eats away at their defenses. This tool allows Brooke's weapons, along with the other drones to do more damage to foes. 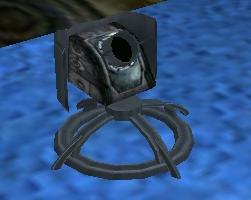 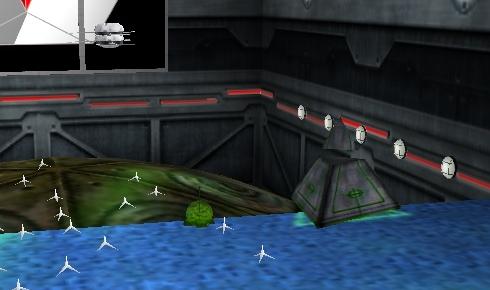 These miscellaneous tools are designed mainly to make the lives of Edward's foes more painful. The Triage Beacon, however, emits a swarm of nanites that repair both Edward's cells and the shells of his robots.

Edward has few weaknesses, thanks to his technology. However, weapons such as EMP devices can destroy him. Also, although it is an age-old cliché, his enemies would, in theory, be able to capture Brooke and use her against him - if they were able to capture her, that is. However, this theory may perhaps prove to be exactly the opposite - during the long years when Brooke was comatose, he seemed to draw strength, inspiration from her absence. This allowed him to create his vast array of technology (including the Atomic Spork Launcher), which has saved both their lives an infinite number of times.