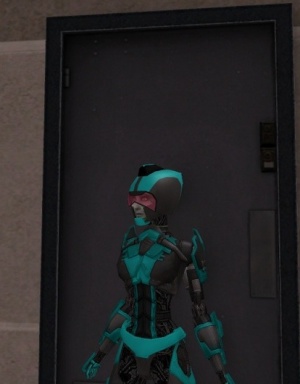 An expert on Robotics and Cybernetics, Dr John Hawthorne was a Loyalist scientist assigned to work on the cybernetic brain required for the Olympian Project. The idealistic Dr John dreamed of the day when the Resistance and Loyalist would put aside their differences to retake the world from the Devouring Earth. To achieve this he worked as a liaison between the two factions, trying to bridge the gap and direct their efforts towards a common goal.

His initiative was unappreciated by the Loyalist who saw him as a Resistance sympathizer. Despite being warned to desist, Dr John remained steadfast to his goals. Worried that he will compromise the secrets of the Olympian Project the Provost Colonel ordered for him to be arrested.

The overzealous Powers Division soon raided Dr John's abode with his family in it, using excessive force to bring him in. When Dr John refused to cooperate the Powers Division brutally crippled Dr John, maimed his daughter Eva and killed his wife.

When the Resistance learnt of what happened, they rescued Dr John from Lambda B.A.F and also recovered his daughter from Cole's memorial hospital. When Dr John saw his precious Eva was crippled from head to toe and lying in a coma, he was devastated.

Vowing to bring his daughter back to life by any means necessary. Dr John devised a way to transfer his daughter's conciousness into a synthetic body made in her exact likeness. He was determined to succeed where Metronome has failed. Dubbing it Project Eva, he began work on clockwork parts supplied by the Resistance and named the improvised Clockworks as EVAs.

Resentful of what the Loyalist had done to him. Dr John donated the earlier EVA models to the Resistance to be used in battle against the Loyalist. The data gathered proved to be useful as each subsequent EVA unit surpassed their predecessors. Day & night he worked feverishly to perfect his creation.

Months of hardwork later, Dr John revealed his latest model known as Eva Omega. Satisfied at last, all thats left to do now is to test Eva Omega in a live environment.

Eva Omega represents the pinnacle of Dr John's years of experience and technical genius. Although the frame-work was based on Praetor Berry's IVy. Eva Omega was built from much rarer materials and incorporated with some of the latest technological components invented by Dr John himself.

Unlike earlier EVA models, Eva Omega was outfitted with Advance Drone Control Module. This upgrade allowed her to direct battlebots to fight on her behalf.

One of the components used in the construction of Eva Omega was the R.O.M (Reinforced Organic Metal). With the help of the nanobots and given enough time, Eva Omega is capable of complete self-repair in the field.

Eva Omega is fitted with a micro reactor which allows her to function without ever needing to recharge from an external power source.

Installed with a Energon Field Generator, Eva Omega is capable of projecting an energy force bubble as a form of attack.

Written in a completely different programming langauge and protect by the most advanced network security systems. Intensive tests has revealed that Eva Omega cannot be hacked, at least not yet...

Dr John will never allow her daughter's new body to be compromised in anyway. To achieve this he has created an advance computer defense system based on the human's immune system. The AI learns from its computer invaders and will adapt new strategies to either clean them or assimilate them as useful programs within itself. However while doing so, Eva Omega may temporarily lose certain functions depending on the potency of the infection as evidenced by test trials.

Eva Omega is not indestructible and can be destroyed. As an additional precaution, Dr John has incorporated an emergency system which teleports Eva Omega to a randomly determined safe location. This fail-save will trigger immediately when Eva Omega sustains critical damage to her core systems.

Unlike most AIs that are ruled by pre-determined algorithims and arithimetic calculations. Eva Omega approaches new ideas and information in an almost human way. So much so that it is capable of making errors only made by human beings. However she is also able to adopt unconventional strategies normally not used by logical reasoning of robotic AIs.

A skill that previous Eva models acquired from the Resistance members. The knowledged was passed down to current Eva Omega who is now able to handle most ranged weapons with ease.

Instead of firing of conventional projectiles, this prototype harnesses power into high energy laser into lethal pulses or bursts depending on the firing mode.

A removable component added by Dr John to ensure Eva Omega will always have a weapon in case the Pulse Rifle malfunction or was forcibly removed. Although fairly weak the taser gun is retractable and stays hidden unless fired.

Sensitive equipment requires adequate protection. Dr John has created a this helmet to provide defense against EMP attacks that could potentially shut-down Eva Omega. It also features an uplink comm device that reduces delay when sending command to battlebots over vast distances.