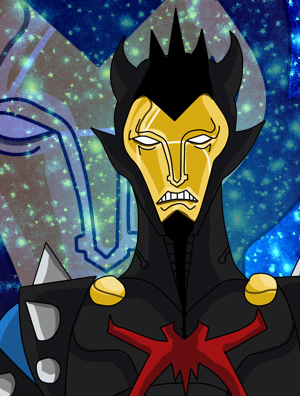 While attempting to construct a time machine for Crey Labs, scientist and inventor Kellon Faris inadvertently discovered a dimension made purely out of dark energies. He named this discovery "The Dark Matter Zone". Due to prolonged exposure to the energies, Faris slowly grew insane and eventually was fired.

With no financing to continue his research, Kellon turned to crime. He created a suit of armor which is powered by the energy in the Dark Matter Zone. With this armor, he began life as a super-powered criminal. As time passed, Kellon became even more unstable. He began calling himself the Lord of Darkness, and modified his helmet to reflect this self proclamation.

Kellon Faris is no more. He is now Exadeus. 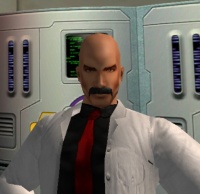 spaceAt one time, Kellon Faris was a very bright child with an exciting future ahead of him in the field of science and invention. He was beyond being just smart. At 19 he was accepted into Mensa International, a society consisting of some of the world's most intelligent individuals. He later won a Nobel Peace Prize for his invention of the Transmatter Gateway, a series of connected teleportation tunnels which aided in bringing supplies and food to many third world nations. He was approached by Crey Industries shortly after and was asked to assist them in the invention of a time machine. Eager to prove himself and see what he could really accomplish, Kellon accepted the job and began his work.

spaceThe expanding universe theory states that the faster expansion rate of the universe is due to a mysterious, dark force that is pulling galaxies apart, this is known as Dark Matter. Faris theorized that if the Dark Matter could be controlled, the effect could be reversed, thus resulting in time travel. With the help of his assistant, Davis Walker, the machine was slowly constructed and the test phase was about to begin. During the test phase, the calculations were somewhat off, but Kellon thought such a miscalculation was inevitable due to the fact that no one had any true information on the energies. The test continued along as planned with Kellon making adjustments on the spot.

spaceThe machine continued to act unstable. Portals began to open revealing black space. Walker tried to correct it, but was sucked into one of the newly opened portals, never to be seen again. Kellon started to breakdown, however something called to him. He could hear something from the portal. At first he thought it was Walker, but it was something else. Some kind of higher being he thought. The portal closed leaving Kellon alone in his all but destroyed laboratory. 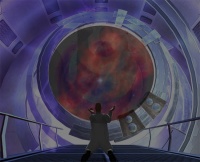 spaceCrey officials entered the room to which Kellon recounted the events and his findings. He had discovered what he named "The Dark Matter Zone". An area located at the edge of the universe, and full of raw, untapped energy. Energy that if used correctly could power cities, even countries and of course, his time machine. He continued to work however due to overexposure to the dark matter, Kellon started growing somewhat insane. He lost sleep and thought only of his discovery, day and night it consumed him. He began to rave psychotically at times and threw violent fits without being provoked. Due to this Kellon's funding was pulled and he was fired from Crey Labs.

spaceWith the lack of financing, Kellon Turned to crime in order to pay for his research. His first version of the Darkness Armor was merely two gauntlets. Using his time machine technology, he was able to tap into the Dark Matter Zone and use it's energies as an offensive weapon. After a time, he had the amount of money necessary to construct a full body suit of armor. Now covered head to toe in his Darkness Armor, Faris became a full time criminal. Due to the fact that his armor is directly linked to The Dark Matter Zone and absorbs it's energies constantly, Kellon is now in a complete state of insanity of which is irreversible. He no longer refers to himself as Kellon Faris but as Exadeus, Lord of Darkness and master of the Dark Matter Zone.

spaceAfter a battle in Warburg that took place in 2007, Exadeus was one of many villains defeated and captured. Exadeus was taken to the Maximum Threat Longbow prison - Strongwall. Strongwall Prison had never had an escapee in its entire history and Kellon Faris has been among its inmates for the last three and a half years.

spaceThe villain Cyborg Sinister staged a massive assault on Strongwall, attempting to free himself. Kellon and several other criminals were freed in the melee. The Infiltrators managed to ensure their safety and put them on a transport to The Ziggurat for temporary holding. On the way, the criminals hijacked the transport and crashed it in the streets of Skyway City. Several criminals including Kellon were able to escape and remain at large. Kellon has enlisted the aid of several of the prisoners who escaped with him from Strongwall.

spaceIn an effort to rebuild his lost resources, Kellon returned to the Dark Matter well in Guatemala. He was met by resistance by the villain Cyborg Sinister who had begun mining the material for his own purposes. Exadeus followed Sinister to a nearby temple where he encountered not only Sinister, but Phanto and The Infiltrators as well. He managed to survive the encounter and return to Paragon. After being contacted by mob boss, Tucker Clay (a fellow Strongwall escapee), Exadeus agreed to meet him at a secure location to discuss the sale of Dark Matter-Infused weaponry.

spaceThis exchange was interrupted by Rave Spider and another unknown hero. Rave Spider expressed interest in Exadeus helping recover The Masked Renegade from The Dark Matter Zone. Exadeus agreed on the condition that the heroes allow him sixty days amnesty. They agreed - and after hijacking an Arachnos portal in Grandville, Exadeus brought The Renegade back into their plane of existence. Exadeus left and began planning his two months of freedom.

spaceExadeus utilized his new found power in the criminal underworld to assemble a team with intent to kill Phanto for allowing the Infiltrators to destroy the Mass Eradicator. Unfortunately, Sebastian Kain and his new ERA had use of Phanto, and so he gained immunity as a head-on attack from Exadeus would cause a conflict between him and ERA, which would be more trouble than it was worth.

spaceThe only way to get to Phanto was an indirect attack. Exadeus gained the help of master con-artist, Deceiter, who posed as a high ranking longbow official named "Agent Slate". Slate then recruited the members of the Infiltrators for a Longbow-sanctioned operation that would bring down Phanto. Exadeus was playing all the right people against eacho ther, hoping for a huge pay-off.

spaceThe Olympiad was an annual Warrior-sanctioned villain tournament where the best fighters and criminals duke it out for Athena, the Queen of the Warriors. The winner of this tournament would expect offers from all over the seedy underbelly of society. Hitman positions, bodyguard jobs, it was no surprise the tournament was scouted for its talent. This year, Sebastian Kain had Phanto persuade the winner of it to join his cause in ERA, to help bolster his army.

spaceUsing Deceiter as a stand-in for Slate, Exadeus formed the Infiltrators once again, plus a few extra members like Luficia or Xanatos. Then they went undercover into the tournament, hoping for one of themselves to win and catch Phanto off-guard. Red-Havok accomplished this, but Phanto saw through his cover. What followed was an all-out Longbow siege of the island, with the help of the heroes who had gone undercover.

spaceExadeus had bought time though, and he had made his rivals the main threat. While the former Infiltrators, or Challengers, went up against Phanto, Baron Blitzman, Sebastian Kain and ERA, it was clear that he would have time to rebuild the ultimate weapon. He would rebuild the Mass Eradicator.

spaceExadeus met with Amon Aser, and struck a deal to construct an inter-dimensional portal within Strongwall. This portal would be a direct doorway to The Dark Matter Zone, the area Aser decided to build his new prison. He would now keep super threats, be them villain or hero, in the DMZ and become an international hero. Meanwhile, Exadeus used the vast resources provided by Styx Industries to create his Eradicator replica.

spaceHe remained at Strongwall, in secret constructing the mega weapon, all while evading capture for months.

spaceWhen Johnny Turbo was admitted to Strongwall, The Challengers found a deeper conspiracy at work, causing them to investigate Strongwall and Amon Aser even further. The team of heroes mobilized on the island prison, and were met with resistance by Aser, who eventually revealed that Exadeus has gotten too powerful. The prison was then flooded with dangerous dark matter energies, leaving the heroes in jeopardy.

spaceUsing Turbo as bait, Exadeus trapped The Challengers in the prison, and released the many inmates it held. The Challengers fought their way through the prison, searching for Exadeus. Finally finding him, Exadeus battled The Challengers, but was clearly outnumbered. He retreated, expecting them to follow. He traveled through his newly constructed portal and escaped to The Dark Matter Zone.

spaceThe heroes followed Exadeus, and battled the mad villain as they never had before. While directly in The Dark Matter Zone itself, Exadeus was at near unlimited power. He brutally destroyed the team, before finally succumbing to their combined efforts, most notably, Replacer's energy siphoning. Red-Havok ordered the team to leave as Exadeus used his last remaining power to close the portal back to Earth. They managed to make it through, just at the last moment.


The Edge of Oblivion

Super Strength
spaceWith the Darkness Armor, Exadeus' strength is magnified 100 fold. He can preform many extraordinary feats and is capable of pressing over 5000 tons.

Background in Science
spaceExadeus has not forgotten that he was once one of the most respected minds on earth. He continues to create new weapons every day and enjoys testing them out on unsuspecting civilians. 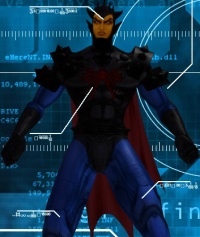 spaceBy tapping into "The Dark Matter Zone", Exadeus can cover himself with it's dense energies which act as an even stronger form of protection. Though still protected without the force armor activated, it provides an exceptional protective shield.