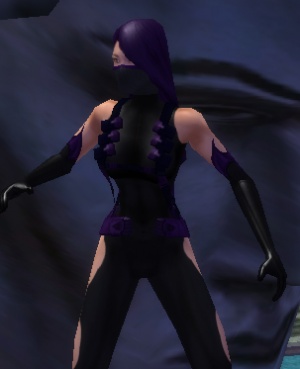 Fadeleaf hovers near the minotaur statue of Talos during a patrol
·

"Your life as you know it, is over. When we're done with you, your body and soul will be ours." --Tsoo torturer, to Alexandra Bradley

Alexandra "Alex" Bradley was a socialite from one of the most affluent and wealthy families in the country. On her nineteenth birthday, she was publically outed as a mutant. Soon after, the Tsoo took interest in her powers, abducting Alex from her penthouse in Talos Island. The Bradleys used their PPD, media, and political connections in a frantic search to no avail. Alex was lost... brainwashed and tortured for months in a dingy Rogue Isles warehouse. When her obedience was no longer in question, the Tsoo completed her training. Alex forgot who she was and reprogrammed to believe she was one of the Tsoo's top killers. Years passed, and Fadeleaf executed some of Rogue Isles' most lucrative assassination contracts for her masters. Her face always shrouded by a ninja's hood, no one knew Fadeleaf's true identity. During a routine hit, Fadeleaf's servitude to the Tsoo ended. Unbeknownst to Tsoo intel, the mark had powerful latent psychic abilities. He sensed Fadeleaf's inherent goodness even as she plunged her blade through him. Dying from the wound, he reached out and touched Alex's mind, restoring her suppressed memories. After killing her former Tsoo associates, Alex Bradley returned home...

"Early today, the police informed me that there was a break in our case. A woman exiting a docked freighter from Cap Au Diable, surrendered and identified herself as my daughter. After meeting with her just minutes ago, I can confirm that she is indeed, our Alex..." --Michael Bradley to reporters, after meeting Fadeleaf at a police station

Alex's re-appearance created a media frenzy. In public, Fadeleaf offered only short, concise answers about her abduction, stating that the details had to be private between the Bradleys and the PPD's investigation. She also assured that despite her beginnings on Rogue Isles, she would be working with Paragon City's heroes starting with her hometown, Talos Island.

"It's funny how you all run from me. Like if that will help you." --Fadeleaf to a Tsoo, as he pleads after being beaten by her

Talos Island's seaports were a hub where the Tsoo ran a good portion of their illegal operations, especially human trafficking. Within days of Fadeleaf's statements to the press, the Tsoo found themselves cornered when the seaports unexpectedly turned over to a new owner: Michael Bradley, Alex's father. By day, the docks were suddenly swarmed by new security personnel hired by the Bradleys, and by night they were monitored from all angles by high-tech surveillance drones, networked directly to PPD SWAT. But what crippled the Tsoo the most was that their bosses and lieutenants were disappearing without a trace. It was common knowledge that Fadeleaf was responsible for the disappearances, even though she was never seen. Without the influence of their leaders, many Tsoo street soldiers became easy targets for the PPD to send directly to the Zig. Over a short period, Talos Island's seaports flourished with legitimate commerce that returned the Bradleys dividends on their investment.

"The bad guys thought they had a new weapon to use against us. Instead, the heroes of Paragon City gained a good friend. As far as I'm concerned, Fadeleaf is one of us." --Ms. Liberty, at Fadeleaf's official registration as a Paragon City hero

Since the Tsoo were responsible for "creating" Fadeleaf, they lost a significant amount of reputation with other criminal organizations. With her civilian name, Alex Bradley sponsors many charity events in Paragon City, particularly fundraisers for the missing and exploited. But whatever assignment Fadeleaf is officially working on is classified. Whether it be for the PPD, the Midnight Squad, or Vanguard... Fadeleaf knows that intimidation, secrecy, and plausible deniability are a field agent's greatest assets.

"In her college days, Alex tore up the VIP, partying all night, dropping crazy money on drinks for all her friends, and doing all the s--t that bad rich girls usually do. Now, if you saw Fadeleaf in the VIP, bumping and grinding up on her is not a great idea... unless you're suicidal." --DJ Zero

Fadeleaf is best described as beautiful, resourceful, and sophisticated... but also sullen, calculating, and emotionally distant. The ordeal that she went through during her captivity plays a large part on how she views the world. She has a select few that she considers close friends, and prefers to keep it that way. She is independently wealthy, and can often be seen as a patron in Paragon's hottest nightclubs, like Pocket D. Although her identity is not a secret, there has been little or no personal attacks made on Fadeleaf or her family. It is speculated that the reason for this is because many of the criminal factions in Paragon City and Rogue Isles are mindful of her reputation as a shadowy assassin with resources and secret connections to some very powerful players, even within their own ranks.

Fadeleaf is a mutant who draws her power from the netherworld. Her mastery of dark energy gives her enhanced strength, reflexes, and limited mesmerizing abilities. She can mold the dark aura around her for a number of effects such as making herself semi-intangible, crippling an opponent's mobility, and even blinding them in total darkness.

More than the average Tsoo ninja, Fadeleaf will use unorthodox methods to get the job done, from advanced meditative trances that heal or make her temporarily invincible in combat, to seducing a target for information... or for a kill. She is elusive and can hide in plain sight indefinitely until the perfect moment to strike.

Fadeleaf uses caltrops and shuriken, both of the regular and explosive variety.

Fadeleaf can warp the dark aura around her to fly at high-speeds.

Those who have extensive martial arts training from the Tsoo are excellent acrobats with an unparalleled sense of balance and leaping.

Fadeleaf can create a dark wormhole to pull her opponents in for an ambush.