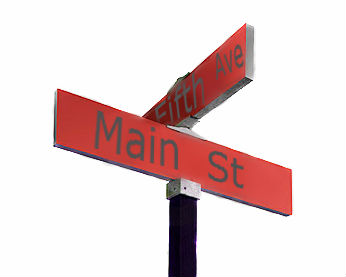 The intersection of Fifth Avenue and Main Street is one of the major intersections in the north-eastern part of Port Oakes, not too far from Fort Hades. It's a neighborhood firmly within Mook territory, rundown and worn out, but still with some life left in it. The neighborhood is a mix of commercial and residential properties, with little in the way of new construction in the last thirty years.

Some of the prominent businesses in the neighborhood include:

Phan’s Bakery - a Vietnamese bakery, specializing in Asian baked goods, with a few western staples to cater to the dominant tastes in the neighborhood.

Benny Kato’s Movieplex - the local dollar theatre. It’s a small movie house that has certainly seen better days. The facade hints that it may have once been one of the ‘movie palaces’ of the early days of cinema, but most likely it’s merely a decent fake. Shows classic kung-fu movies every Tuesday

Mind’s Eye Detective Agency (formerly Ben’s Butcher) - the old butcher closed up shop about a year ago, quite suddenly. Rumor has it his rent suddenly spiked - but that doesn’t explain why no one has seen Ben since. At the beginning of August, three young adults - barely more than kids themselves - showed up and started renting the place, re-dubbing it the Mind’s Eye Detective Agency.

Ed’s Diner - No one’s quite sure who Ed is, or if he ever even existed. This is the sort of place where the staff learns the names of regular patrons and you can order "the usual" and be guaranteed a solid meal every time. The diner is also the sort of place where the homeless or otherwise down-on-their-luck can spend a cold afternoon in relative warmth without being kicked out - apparently an edict from the management, rather than from the goodwill of most of the staff.

LT’s - The local dive bar/motorcycle gang hangout. It’s a rough and tumble environment place that welcomes anyone with money in their pocket. Don’t expect any fancy drinks here, and considering there’s rumors of a bathtub still in the back, drink at your own risk. While the occasional bar brawl happens, all of the bar tenders are quite efficient at ejecting rowdy patrons. If they insist on continuing the fight outside, the Mooks are known to show up with supernatural efficiency to shut it down.

The Gun Shop - The Gun Shop may have had a proper name once upon a time, but a nor’easter ripped down the signage five years ago and no one bothered to replace it. Guns for sale here, and if you pay enough no questions will be asked. Best not to ask too many questions yourself, either - you probably don’t want to know where that lazerblaster 5000 came from and why it’s in a neighborhood like this.

Main Party Store & Liquor - Across from The Gun Shop is the liquor store - because what goes together better than guns and booze? While LT's doesn't card, Main Party has a strict policy about selling alcohol to minors, and doesn't even like kids being present in the "party" half of the store.

Abandoned Factory - No one seems to remember exactly what the factory used to produce, or how long ago it was shut down. It’s been boarded up for years, and almost impenetrable.

Lucky Lindy’s Pawn and Thrift - The local pawn shop that everyone in the neighborhood agrees is a ripoff. Somehow manages to stay in business, even though almost everyone chooses to go see Crazy Dave in St. Martial’s instead.

Father Gerard Henri's Home for Wayward Youth - Just a few side streets away from the main intersection is the respected orphanage. The wards of the Home are regulars in the neighborhood and often known by name.

Minh and Lien Phan - The husband and wife proprietors of Phan’s Bakery. Minh handles the baking while Lien, who’s mostly blind these days, keeps the books and works the front of the shop. They are an elderly couple with no children in the Isles. While some newcomers think the kindly couple would be an easy target to scam some sweets off of, Lien runs a tight shop, and makes sure her husband only bakes as much as they can reasonably sell within a day or two.

Alfred “Al” Roche - Co-owner of LT’s, and the only manager ever seen by the people of the neighborhood. Al cuts an imposing figure as a large, muscular Black man with a shaved head. His presence is usually enough to keep the rough and tumble clientele of LT’s in line. He has a sense of refinement about him, however, for those that get to know him that implies bartending hasn’t always been his main line of work. And when the Mooks come around looking to make arrangements for “rent,” Al is nowhere to be found, leaving negotiations up to one of his other bar tenders.

Brother Asher - The neighborhood’s token “creepy religious guy” who spends his days handing out pamphlets for his “church” that may not actually exist out of Brother Asher’s head. His teaching’s are considered weird by Scientologists and Luddites alike. He wears fancy, if faded, clothes under his trusty trenchcoat, rain or shine, and is an all around intense guy.

Timmy and Tammy Fontaine - Lead fry cook and lead waitress at Ed’s Diner. A middle age couple with seven kids between them (both of them were married before), they love children almost as much as they love each other. Unlike some of their co-workers who just barely tolerate the less fortunate, the Fontaines find ways to slip a stale piece of pie to those unable to pay, especially kids.

Benny Kato - Owner and operator of his Movieplex. Tries to keep up a tough front, but has been known to let his guard down for a select kid or two.

Lucky Lindy Esposito - This shady woman runs the neighborhood pawn shop. She’s generally avoided by the locals, seen as a scam artist at best, and a doublecrossing snitch at worst. No one says a bad word about her publicly, however, for fear of word getting back to whoever it is that is allowing her to stay in business despite the lack of customers.

Fifth and Main is the VG through which Father Gerard Henri's Home for Wayward Youth coalitions. Contact @A-Muses or @TheMindfulFool for more on coalitioning with us. The group has few actual members, and is intended primarily as an RP space rather than an active VG.

1. Violence is to be kept to a minimum - bar brawls may happen in LT's, for example, but the combatants would be broken up and/or kicked out within five minutes, and the Mooks show up if fighting happens in the street to "take care" of the less-desirable elements (rumor has it they often end up with stylish cement shoes...)

2. Vandalism/Destruction of property is prohibited - No setting fire to buildings, ripping off doors, etc. The Mooks are just looking for a fight and there are plenty of them to give it.

3. "Mature" RP - we're not opposed to more mature storylines and RP in general, but anything you wouldn't do in front of your grandmother should be taken to private chat and absolutely never in local, even if you think you're the only one in the base.

4. Keep it clean - we acknowledge redside is home to some of the most villainous characters in the game, but we don't want to ruin anyone's real life fun. In addition to keeping mature RP private, please watch your language. Sparse cursing is acceptable, but slurs, even when only meant as an IC insult, should be avoided.

Want to run a story in Fifth and Main? Want to rob a store? Want to set fire to a building? Contact @A-Muses or @TheMindfulFool first! We are willing to bend the rules if there is active out of character communication.