Foundation X is an all-mutant supergroup that is funded by and works for the Duchesne Foundation, a philanthropic organization that conducts research and looks after the needs of superhuman beings, especially mutants. Foundation X mutants are called upon to protect the interests of the Duchesne Foundation, as well as mutants in general. When dangerous mutants need to be apprehended, whether they are criminals or recently discovered mutants who can not control their abilities, Foundation X responds to the call and attempts to safely control the situation. Foundation X mutants also perform private security at Duchesne Foundation facilities, can receive contracts to extend security consulting services to private corporations, firms, and individuals, and they attend civil rights functions or political rallies and events on behalf of mutants. Due to the potentially hazardous nature of their engagements, Foundation X does not permit underage mutants within their ranks.

For ease of administration and delegation of responsibilities, the following rank structure is used within Foundation X.

Foundation X does issue its agents an official uniform, which is required to be worn when acting in an official capacity. The details of this uniform are listed below:

Players are free to use individualized pieces such as goggles, hair styles, capes, wings, and weapons, among others, to customize their heroes otherwise. Uniform considerations can be given for mutants with odd physical characteristics that the standard uniform does not easily accommodate.

The color schemes for A1 and L2 are located here

Completed Foundation X uniforms for men and women should look something like this: 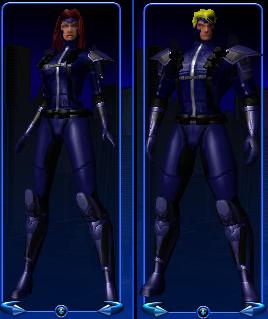 Foundation X is currently looking to expand its roster of agents. Preferred membership is extended to graduates of DIADEM but mutants with other educational or training backgrounds will be accepted on an individual basis. Operationally, Foundation X performs roles similar to those of fire, rescue, and law-enforcement officers so mutants with similar backgrounds are desirable. Mutants who also spent some time in any branch of the military or with a private security consulting corporation are also desirable. The minimum age limit for Foundation X mutants is 22 years of age, allowing enough time for mutants to at least complete their collegiate-level studies or to have spent some time in the military. Mutants with backgrounds as convicted criminals or felons, even if they have paid their debts to society, are barred from membership. There are no other restrictions applied for gender, nationality, race, ethnicity, religious beliefs, or orientation.

Who We Are Looking For

Below is some information on the types of heroes and players we are looking to join Foundation X. Please send us a message to @Major Paragon during game play.