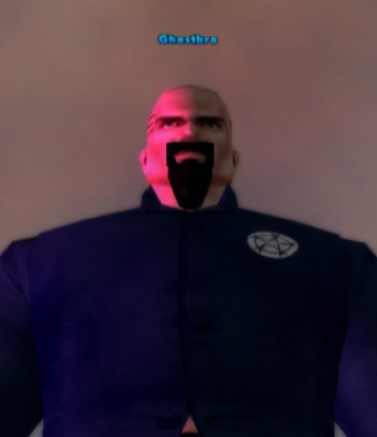 Doogie McPorter, better known to the public as Ghostbro, is a professional ghost hunter and paranormal investigator. Hailing from Boston, Doogie's interest in the afterlife first manifested as a young adolescent after getting drunk and screaming at ghosts in a graveyard. Since then, he has blossomed into a cable TV personality with his own series, Ghostly Investigations, during which he investigates ghosts with some of his boys from Beantown. Utilizing state of the art technology, the Ghostbro is able to track ectophotonegative activity and other made up bullshit to definitively prove the existence of a ghostly entity that is maybe, probably there. To this date, he has no hard evidence of ever encountering a ghost, but his creepily ambiguous adventures have nonetheless won over the hearts of millions. Further research into the Ghostbro and his bros will reveal some disturbing truths: namely, that he always seems to wear the same blue work shirt and that his goatee is dyed an unnatural, inky black. This has led some to theorize that Ghostbro is indeed a ghost himself hiding in some kind of re-purposed Fred Durst clone's body, but the truth is, he is just a dumb character that was made for really no discernible reason after watching too many episodes of Haunted Towns.