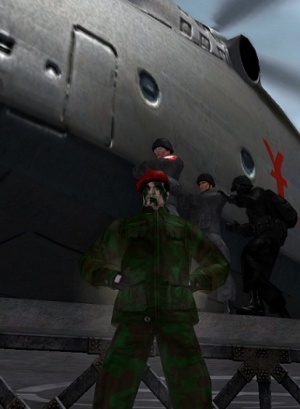 A veteran of the Hamidon Wars. Alan had just graduated from university & planned a future with his fiancee. However all these came to an end when the war broke out. Alan saw with his own eyes how the Devouring Earth took the lives of his friends & family.

Although filled with grief, Alan was not one to give up on life so easily & enlisted with the British Army. Hoping to do his part for humanity. The war was brutal and the army was losing both ground & men to the Devouring Earth. By the time Alan heard of Marcus Cole's victory over Hamidon. Most of his COs were already killed. Leaving Alan the only one left in command of his unit and the survivors that they picked up.

Wasting no time, Alan rounded up everyone and made their way towards Praetoria. The journey was dangerous and the group would have been annihilated if it were not for Alan's leadership.

When Cole proclaimed himself Emperor, he promoted Alan to the rank of Captain within the Imperial Defense Forces in recognition of his abilities & contribution. During this time, Alan battled against the Devouring Earth in an effort to retake the world from the monsters.

A decade later, he retired from active service and resumed a civilian life. Years have past, but Alan has never found anyone to replace his beloved. To fill the void within him, Alan then took up community work. Reaching out to the youth, whom he steered away from a life crime & gave them a purpose.

The orphans were taught how to fend for themselves and how they could contribute positively to society. As many of the orphans lost their families during the war. Most of them looked up to Alan as though he was their father. Even those that didn't held great respect for what Alan has done for them.

The peace however did not last long as elements threatening the peace & stability of Praetoria is on the rise. Attacks had been made on public amentities & fire fights were spilling into the streets.

Swearing to uphold the peace at any cost, Alan came out of retirement & took on the mantle known as High Command. This time he wasn't alone. The orphans he once helped are now young men, ready to do their part for Praetoria.

An ordinary human being, High Command possess above average physique & capabilities for a human male at his age. This is largely attributed to his healthy lifestyle and the military training he once gone through.

Possessing non of the exceptional powers of telepathy or mind control. High Command simply oozes with confidence & leadership. People are drawn to him, paying rapt attention when he speaks and follows his lead when he commands.

Having Charisma is not enough. High Command went through the school of hardknocks and gained combat experience in a live fire environment instead of a boot camp. It is precisely this why the boys are willing to follow his lead into battle. Trusting his experience to bring them home in one piece and victorious.

High Command knows exactly what to say and how to say it in any situation. His voice is clear & articulated. Resonating with either command or empathy when he needs to. Such is his persuasiveness that he is able to convince someone to purchase something that they don't need and even find a use for it.

While he is no expert High Command brushes up his knowledge on the latest technology. He keeps himself updated and constantly tinkers with various technological hardware. As such he is able to operate some of the latest military hardware with ease.

High Command's time in the war has taught him how to operate common fire-arms such as pistols & battle rifles.

High Command carries the modified M18 assault rifle outfitted with a M205-B mini grenade launcher. Its a far more advanced model than the M16 but outdated by current day Praetoria. He continues using it out of nolstagia. The weapon has been carefully maintain and also retrofitted with new technology to ensure it does not become entirely obselete.

A special walkie-talkie designed and built by High Command himself. Utilizing special encrypted channels for him to communicate with his boys. He named it after his fiancee who died early in the Hamidon Wars.

A small device strapped to his wrist. High Command uses this to operate the more complex hardware available in his arsenal. Amongst these are:

This device saturates surrounding area with nanobots & pulses with electromagnetic waves that heals wounds and acts as a pain dampener.

Deploys a stationary turret that uses advanced IFF that cannot be hacked. The turret will automatically fire at any hostile targets that gets too close.