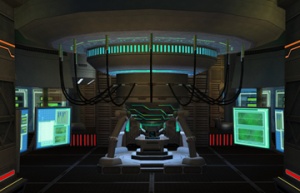 The original Hyperion Force base, located beneath Hyperion Way in Atlas Park, was a single office in one of the many subterranean warrens below the city. Although the site was continuously expanded, when the supergroup moved its headquarters to a new facility in 2007, the original base was remaindered to the Hyperion Foundation and shuttered. This was in fact an elaborate subterfuge; the site was further modernized, expanded, and even moved further below Atlas Park (the old office becoming a teleport relay site). The site was used as cold storage facility and data warehouse, but most importantly, was used as the site to develop future technologies, specifically the next generations of the Hyperion Force supercomputer.

The facility was eventually utilized as the primary base for Hyperion Force after the main headquarters was destroyed in August 2008. However, after encountering multiple security breaches as well as the overcrowding of the underground region of Atlas Park, the team relocated to an undisclosed location off of Talos Island in an undersea facility in March 2011.

Previously, all supercomputers used by Hyperion Force were of the Microft family (including the most recent version 4), built from technologies derived from Masterson Industries and even Crey Enterprises. The current Hyperion Force supercomputer does not follow that design lineage. Following the recovery of the proto-computing technology in the Ouroboros episode of September 2007, it quickly became clear that Microft system could not execute this unfamiliar technology. To this end, the Microft system was engaged to design a system that could execute this technology. The result of this effort was the Mycroft Core series, of which three generations were architected and completed. This project ran in parallel to the design of Mycroft 5.0 at Hyperion Force headquarters, which was destroyed in the explosion that annihilated that facility in August of 2008.

The Lovelace Core went online in April 2009, although it did not reach full operational status until May. It immediately began designing its successor system; the design phase was complete in time for the relocation of the Force to its new facility; this accelerated its projected construction substantially, allowing Lovelace 2.0 to go live in March 2011. It is the tenth major supercomputer for Hyperion Force: the previous five generations of the Microft system, the three versions of the Mycroft Core, and the two versions of the Lovelace Core.

What is thought of as the Hyperion Force computer system is actually three major systems. The Lovelace Core itself is an artificial intelligence that oversees the operation of all three systems, primary roles are stewardship, analysis, and strategic planning. The Sherrinford Core was the first of the new computer systems following the Ouroboros episode and was integrated into later generations. This system handles almost all of the day-to-day transactional functions of the supergroup, including base operations, resource handling, communications, and security. The Sigerson Core was the second system developed, and handles data warehousing and archive functions.

Also located near the Core is an Aspect of the Pillar of Ice and Flame, which permits members to access the timestream. Every use of the Pillar is logged by the Core to ensure that unauthorized tampering of the time stream is discouraged.

The current facility relies primarily on teleportation to permit heroes to get to and from the base. Entrance is through a base portal as defined by the FBSA as a requirment for all supergroups operating in Paragon City. Exit can be performed the same way, but more often the team will utilize assorted teleporters in the base.

These pads are in two sections of the base. The South Bay contains pads that will send the heroes to Atlas Park, Galaxy City, Skyway City, Steel Canyon, Talos Island, Independence Port, Founder's Falls, and Peregrine Island. The West Bay's pads cover the rest of Paragon City, as well as Pocket D. Additionally, between the two bays is a special teleporter designed for extradimensional transport.

As part of the transition, equipment from the specBio projects were placed into storage, and a fully-equipped operating suite built, complete with AutoDoc support (dubbed "Dr. Watson"), supplementing the Intensive Care suite and standard dispensary. Two recovery bays supplement these suites.

Hyperion Force has a history of having alternative routes out of its base aside from the teleporters and base portals. In the previous base, a small craft hangar was added to accommodate and service small aircraft. Originally, this was a Eurocopter Dauphin, but was upgraded to a Longbow Flyer in early 2008. The hangar's roof opened up to a shaft that eventually exited at a location somewhere in Perez Park.

With the move to Talos Island, using aircraft as an alternate exit became impractical; instead, a submersible docking facility was added to the new base. The entry and exit tunnel has a number of defenses to ensure that this tunnel cannot be used to gain unapproved entry to the base. 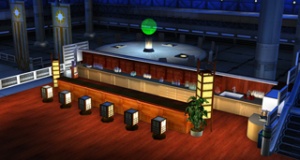 During most of the current iteration of the Force's existence, the official meeting room was often ignored for more informal meetings in the lounge area. As a result, it was decided in early design phases to merge the two together for the new facility. Doing so removed the extensive travel within the base should an emergency situation arise requiring an official briefing. As with the previous lounge areas, there is a casual area as well as a bar with assorted drinks from water, to soda, to beer, to mead (leftover from Draygoth's time with the team), to more exotic concoctions gathered across time and space.

With the increased presence of Hyperion Force at the facility, it was necessary to have a place for the tech-geared heroes to be able to do their work-and additional store objects of importance or danger. The Vault was built with this in mind, allowing both repair and invention as well as the necessary storage.

A small safe is also located in the Vault area, containing a mystical card. These two objects are the only objects to have survived the total destruction of the original iteration's base.