Ivy Reagan Noel Rhodes - who normally goes by "Officer Rhodes", for obvious reasons - is one of the many noble police officers committed to maintaining the peace in Paragon City. Born in Founders' Falls to a doctor and a city official, she was defined by her sense of social responsibility even as a child. It was only natural that she would seek to become a civil servant herself, and then a police liaison and mentor to the youth supergroup Project Corona.

Sure, she hadn't exactly planned on volunteering for a potentially dangerous cybernetic augmentation program to create a superhuman robocop - but then, it didn't exactly surprise anybody either.

And that's it. No tragic accidents or emotional trauma. No betrayal or vengeance, no quest and no nemesis. As Rhodes herself says - "you don't need a reason to be good".

Iron Road is... an accident. In concept, she was supposed to be a gritty, lawless, natural, manhole-cover-and-wrench Tanker, taking advantage of the beautiful shields coming with i13. However, when it came time to delete the name camp and actually make her, she just didn't look right; her origin drifted further and further from the concept as her player mucked about with visual options, and in the end, nothing compared to the riot shield/nightstick combo. Discovering the PPD brand for the shield, and the PPD logo provided by Veteran Rewards, sealed the deal. The black-and-gold came about thanks to Starbuster, and in an effort to make it look more metallic, Rhodes wound up with various tech/robotic textures, which eventually led to the cyborg concept. Noticing the "Auras" tab led the heads-up display from the Cyborg booster pack to be added, which is so utterly cool it was the final clincher.

Her personality, then, was mostly inspired by The Rose Paladin, who was in turn largely inspired by the character Benton Fraser of Due South; It occurred to Fox that, as rare as characters like Fraser are as males, they are all the more unusual as women. Her codename is taken from an upcoming film discovered when researching Peter O'Toole in appreciation of Ratatouille.

Finally, Rhodes is also an exercise in the unusual for her player. Fox's strong tendency toward lawless, anarchistic vigilante women, and her distaste for tech origin as being an "external power source", mean she has generally stayed away from characters like Iron Road in the past. So far she's getting on well with this one.

Ultimately, Iron Road's personality is as simple as her motivation - she's a Good Guy. Though she realises that there are many shades of grey in questions of morality - good people sometimes do bad things, villains can have noble motivations, and so forth - she herself is as clear-cut as can be. She helps people because she believes she should. Of course, she believes that everybody should, but since you can't make other people embrace altruism, she's happy enough just to do it herself - albeit while still trying to convice others it would be a good idea. This simplistic outlook can often make her seem a bit dense to more cynical heroes, but in truth, she's not a poor judge of people. She simply gives them the benefit of the doubt - which wouldn't be so damned annoying if it didn't usually guilt them into doing the right thing.

Like her major inspirations, Benton Fraser and Captain Carrot, Rhodes has equal measures of competence, charisma and slightly goofy optimism, which usually allow her to achieve her goals. She is secure, diligent and decisive, doing whatever she can to the best of her ability but also accepting her own failures; nobody can save everybody, but you can certainly try your best.

"Everybody is trying to achieve something big, not realising that life is made up of little things."
- Frank A. Clark

Rhodes grew up in Founders' Falls, the only child of a relatively high-class family - her mother a surgeon and her father a city council member. Though she had no superhuman powers and never aspired to be a "hero", she was still defined by her sense of morality and responsibility, the trait which led her to seem a career with the PPD. She volunteered for the experimental cybernetics project that created "Iron Road" for two major reasons, the first being that compatible subjects were rare. Secondly, the associated risks were not insignificant, even for those subjects; a person who was not in peak physical condition might be in real danger. Since chance and genetics had made her compatible, and lifestyle had made her suitable, Rhodes saw her participation as nothing less than her moral duty.

Rhodes is employed by the Paragon Police Department, and maintains good relationships with most of the officers in Founders Falls and nearby stations. She also serves as a police liaison to the supergroup Project Corona, and occasionally takes on lectures and training operations with their students. She has been assisted by Project Corona's more powerful members in her own assignments a number of times. 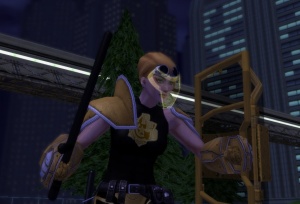 Rhodes' cybernetics give her a number of minor abilities, but centre primarily on enhancing her durability; the PPD's foremost concern, after civilian lives of course, is keeping its officers upright. Iron Road can withstand tremendous amounts of damage by comparison to a normal person, and her body and organs are mostly mechanical, meaning she can be rebuilt from almost anything bar complete destruction. Her secondary enhancements focus on strength - she can exert great force if necessary, but can also moderate her muscle power for situations when she doesn't want to break anyone - and accuracy, by way of an advanced targeting system and heads-up display.

Rhodes is a fine cop. Though she never took on any really high-profile cases in the days before her augmentation, nor did she attract any special awards or public attention, she has always been a highly competent officer who did her job to the best of her ability. She's also generally good with people, especially kids. While her uncompromisingly lawful nature can grate on more free-spirited types, she's also so patient and good-natured that she can usually, in time, win over all but the most bile-filled targets.

In addition to her cybernetic upgrades, Rhodes carries the usual array of police officer equipment, including a police radio, handcuffs, and her trusty nightstick. She also carries a device fashioned especially for her "Iron Road" identity - a force-field generator modeled after a police riot shield, fuelled by her internal power supply. Even moreso than Rhodes herself, the shield is nigh-indestructible, though it does "power down" when her own system fails.

Due to their experimental nature, Rhodes' cybernetics still experience some technical glitches. Her whole system is very power-hungry, and requires short but frequent periods of downtime in order to function at full capacity; an upgrade[2] to her internal generator is in the works, but is still currently caught up in red tape. It also overloads on rare occasions, resulting in a spectacular explosion which puts her out of commission until she gets medical and mechanical attention[3].