A Native American Medicine Man, that can tap into the forces of nature by communing with "Mother Earth" and the "Great Spirit".

Hirto Kahnawake was born in the later half of the 16th century, and resided on the shores of Lake of Two Mountains (Lac des Deux Montagnes) in what is now called Quebec. Hirto was a Medicine Man and possessed a highly evolved connection to the “Great Spirit” and the forces of nature.

Hirto Kahnawake was given the moniker of “Iroquois” by the French in the 17th century, because he was the chief diplomat for his people when the French and Iroquois first made contact. Phonetically, the phrase "speaks with truth", and this is why this name was given to Hirto, and eventually the entire nation of his people.

The French became greedy shortly after first contact and allied themselves with the Algonquin tribes, to pacify and exterminate the more aggressive and modern Iroquois tribes, which they deemed a threat to their growing trapping and fishing industry in the area. When Hirto used his Medicine Man powers to defend and repel these attacks, he was deemed “satanic” by French Jesuits, and he was captured and burned alive for his heresy.

When the “Great Spirit” of the Iroquois nation witnessed the decay and abuse of “Mother Earth” in the early 21st century, he feared mankind would ruin the Earth beyond repair. He decided to send Hirto back to Earth as a celestial spirit and advocate for the Iroquois nation.

Now “Iroquois” has come to Earth, to find allies of great power and strength, and work with them to fight evil, and to stop the Earth from dying. Can Iroquois find camaraderie as an ancient spirit and mystic of nature’s power? What other life forces exist in Paragon that are also unnatural pariahs, like him? And are they also willing to fight injustice and save the Earth from a path of self-destruction and evil? If he can find people like him, he wishes to join their cause and fight, to save mankind from themselves.

The Great Spirit leaned back and chewed his pipe, while light puffs of smoke danced outside the corner of his mouth, lingering there as if the chieftain’s thoughts were holding the smoke in place.

“The Algonquin have an advocate already great spirit. He is powerful, and he is dangerous,” the Medicine Man said, hoping to pull the Great Spirit back from his deep thought.

“Dangerous?” the Great Spirit asked, and the smoke dispersed violently from his mouth.

“Yes, Great Spirit. Dangerous because…because…” the Medicine Man paused, almost ashamed to say the next daunting fact, “…dangerous because he is a white man.”

“What? A white man? The Algonquin Manitou have selected a white man for their advocate?” the Great Spirit was stunned to hear the news, so much so he brought the pipe down to the ground and he let it lie there to smolder without further attention.

“It appears Great Spirit, they had no choice in the matter, an unforeseen circumstance. Who knows perhaps the Great White Gods meddled in the affair?” the Medicine Man replied.

The Great Spirit nodded. The white man interfered with everything, even the basic balance of the Earth itself. That was why the advocates were necessary anyway. The white man was killing Mother Earth, and it was time for those who lived their life in a circle to repair the damage.

“We must send our own advocate,” the Great Spirit decided. “Before the white man sends one on our behalf.”

“The Algonquins tribes won’t like that Great Spirit, they will consider it as untrustworthy,” the Medicine Man pointed out.

“I will worry about the Ojibwe and Chippewa. We must have our own set of eyes and ears, into this mess,” the Great Spirit replied. 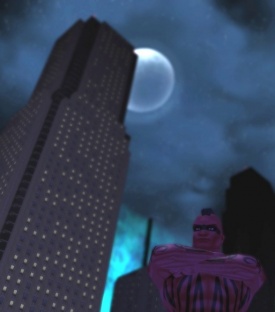 Thus, Iroquois, the advocate of the Mohawk nations came to Paragon and began his adventure to save mankind…
“But who will go? Who would leave the Happy Hunting Grounds for the Earth as it is now? The Earth is violent, dirty, the water cannot be drunk, the air is black and soils your body with each breath. The fish are poisoned and the deer, wolf and bear have been hunted into extinction. The white man of the future, have come to plague the white man of the present in a holy war. Unnatural beasts and creatures fly and possess the power of the gods, destroying nature’s delicate balance. Our own people are scatted and have lost their way. They have lost their religion, their language and their connection to the Great Spirit. The Earth is gripped with evil spirits, oh great one. Who would leave celestial eternity to go back to such a horrible place?”

The Great Spirit reached down for the pipe that he had left on the ground and lit it again carefully and drew the smoke in deeply, “Why you of course, young Medicine Man. I had always intended to send you. Go now. Take the name of our people and go. In time, you shall uncover my powers, and learn what you must do to save our people and our Earth.”

Thus, Iroquois, the advocate of the Mohawk nations came to Paragon and began his adventure to save mankind…

Iroquois came back to modern Earth at the behest of the "Great Spirit" and was immediately taken aback by how poisoned the Earth's air and water had become[1].

Iroquois wanted to establish himself with the local culture, and also exercise his new found powers bequeathed to him from the celestial forces of the Happy Hunting Grounds. So he contacted Freedom Corps, and agreed to round up a local gang, who were causing mischief. When he found that the youths were poisoning the water supply, he not only arrested them, he scalped them, removing the skin from their scalp, while keeping them alive. [2]

The extreme retribution of Iroquois' was critisized by Freedom Corps, and they refused to work with him anymore. Rejected again, by a primarily white power organization (as he had been during his mortal life on Earth centuries ago), Iroquois meditated to find direction. The 'Great Spirit' reminded him that scalping the enemy, was always the way of his people, and he should never forsake that. The Spirit then gifted Iroquois with the swift speed of the deer. Iroquois took to the streets again, with his new found speed, and rounded up the leaders behind the water poisoning scheme. [3]

Officially deemed as a "renegade" by Freedom Corps after his second scalping incident, Iroquois began to wonder if he would ever find brotherhood on modern Earth. It was then, that his lover from his time on mortal Earth, came to modern Earth to accompany him. Her name was Genetaska, and is better known as the "Peace Queen" from old Iroquois legend. The two began to remember the tale of how the two met, and how Genetaska forsake great power, for the sake of the human heart. [4]

When Genetaska is captured and abused by a group of punks known as the "Skuls", Iroquois goes on the warpath and rages across the streets for revenge. In the end however, his anger causes him to lose his connection to the 'Great Spirit' and he himself requires rescuing from Genetaska. Along the way, Iroquois and Genetaska uncover a plot to bomb Freedom Corps headquarters. Freedom Corps obliged for Iroquois help, contacts Votum Justicia and offers Iroquois as a possible recruit for the Barnstormers fraternity.[5]

After Iroquois is accepted into the Barnstormers (via an interview with Votum Justicia), Iroquois tries to calm his anger, and realizes that peaceful meditation helps him unlock incredible mystical powers. He uses these powers to fight a group of humans, who forsake their own humanity to gain power, called 'the Lost'. During the fight with the 'Lost', he finds he commands the winds and lightning of the Earth, and wins an impressive victory. [6] 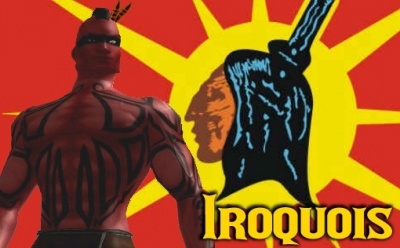