Reputed to be the Old Acheronian spell used by Johann to petition Extra-Dimensional beings.

Todesland is a one-city nation, nestled in between Germany, Poland and the Czech Republic. The countryside is largely comprised of plains, with small patches of woods throughout. Todesland, or “Land of Death” receives it’s name from two main things- the fact that many battles have been fought around the country over the centuries, the result being that if anyone digs even just a little bit in Todesland, they find an excess of humanoid bones, the other being that underneath Todesburg castle is a large crypt filled with, disturbingly enough, skulls and bones of various humanoid and (even more disturbing) non-humanoid creatures, some bones not belonging to any species known on earth. The government of Todesland has barred scientists and researchers from studying these bones only until recently

The house of Grimm

The house of Grimm have been the rulers of Todesland for nearly 500 years, and it’s borders have rarely expanded or retracted. Unknown to much of the population of the land, their lords tampered in various Dark magiks. Due to the amount of dead in Todesburg and the surrounding countryside, tapping into dark energies was easy for the family of sorcerers, who used it to strengthen their grip on the land. It is only recently that Johann Grimm IV, current Baron of the small nation, has discovered that the magiks he and his ancestors practiced were directly linked to the long-forgotten kingdom of Acheron- a realm scourged from the earth in a great conflagration untold millennia ago. His deep research and travels throughout the world revealed that Acheron was very much the dark counterpart to fabled Atlantis, and that Atlantean magiks were much more positive than the insidious magiks of Acheron. It is this knowledge which lead to what happened next…

Johann was recruited by Adolf Hitler in 1935. Hitler was determined to increase the Reich’s power by any means necessary- even if it meant tampering with ancient, dark powers. Wanting to expand his influence, wealth, and power while making sure Germany didn’t swallow Todesland, Johann willingly went along. He adhered to Nazi ideals, was trained vigorously in the studies of warfare and tactics, and, being a “perfect example of the Aryan race” as Hitler himself put it, married Jutta Oster- a beautiful woman from a wealthy family in Dresden. Johann still keeps a picture of her, being one of the only human beings he has ever loved. Jutta shared an interest in the occult with Johann, and proved herself adept at Conjuring and Divination.

When Johann was promoted to the head of all Nazi occult operations, he donned his ancestral helmet- A menacing black skull, and refused to take it off in public places at Hitler’s request- he was now a symbol of the fate of the Reich’s enemies.

Johann, after this, was preoccupied with his own internment camp, “Grimmscamp”, who’s occupants he used in a variety of both grisly scientific experiments (and corroborating with the infamous Josef Mengele) and horrific occult rites and sacrifices, but his true interest was in something else entirely: Atlantis, and Atlantean Super-tech.

Absence from Todesland: Time Marches On

Johann Grimm, having delved into many books of Atlantean lore, and even raiding a small cult in India in search for clues, found what he thought was the map to Atlantis. In 1940, he set off in a German U boat, intent on where the map would lead him. He found a sunken city (whether it was Atlantis or not remains speculation), and inside, he indeed found Atlantean Super-tech. Overjoyed at his findings, he ordered the crew he was with to load various chunks of the Super-tech onboard the U boat. While examining what appeared to be a large sensor array, one of the crew members, whilst attempt to transport a piece of tech, activated the array. Johann simply vanished in a blast of light.

It wouldn’t be until 1985 that a small Spanish expedition found the same ruins, and unwittingly brought Johann to the present.

Johann, startled at sudden shifting, slaughtered the Spanish expedition, gathered up what tech he could, and fled from the sunken city in their submarine. The world had changed a great deal- Hitler had lost the war, Todesland was impoverished and run by an allied puppet government, and his beloved Jutta was dead. He resided in Todesburg for a small time, keeping his helmet locked away in a trunk. He infiltrated the puppet government under the guise of Hermann Naussbaum, a politician of the ‘Todesland Volkparty’- a nativist party looking to keep immigrants out of Todesland. Over the years, he slowly, methodically, cultivated contacts in various terrorists organizations, refined his Super-tech, and practiced magic- even combining the two in an art called ‘Technomancy’. It would be at the beginning of the Gulf war when he struck- with various terrorist troops swarming into parliament, and Johann emerging from them wearing his skull helm. He revealed who he was, and publicly executed every member of parliament in various ways- with ripping their souls from their bodies with Acheronian magiks, torturing them to death with a strange machine invented from the pieces of the Super-tech he had scavenged (he called this machine ‘The Hell Sampler’- you were sampling the tortures of hell before you actually went there), beheading them and surging life into the head that he may taunt them for just a while longer, and one, for his amusement, shot out of a large cannon into a stone wall.

Hungry for more power, mad with grief over his lost wife, he did something Jutta only mentioned- he sold his soul.

With the appropriate books and reagents, he descended into the catacombs of Todesburg castle. There, amidst innumerable bones and suffocating negative energy, he recited the appropriate phrases, gashed his hand, let the blood onto the skull of a virgin, and it- or rather, she, appeared. Cloaked in brimstone, smoke and fire, a demoness appeared. She introduced herself as "Dis", and explained that she had been watching him ever since his coup, and was pleased to see that she sought her out instead of the other way around. Not caring what Dis had to say, Johann laid down his wish- Immortality, never to succumb to sickness or disease. Dis seemed pleased with this, and informed him of her “Fee”: that, though his soul would go to hell after his death, she required to take something else near and dear from him…for her own sake. Without thinking, Johann proclaimed “Anything!”

It was done. Large flakes of flesh fell from his face, his lips receded, his blonde hair fell out. She had taken his beautiful face. To this day, Johann remembers the last thing she said to him, mockingly-

“I suggest you keep that helmet handy…”

Johann is now firmly rooted in his ancestral home. He is immortal, with power and skills surpassing many humans. But now, he wants something more than immortality and rulership of a country. He wants something more than rulership of the earth: He wants Godhood. He wants to surpass the power of the demoness Dis, regain his face and soul, become a cosmic being, who’s power cannot be denied. And he wants to see Jutta again- every attempt to commune with her soul fails, he cannot find her beyond the veil of the mortal world, even at her grave. He searches, and searches, but he cannot find her. If he was a god, he would rend the veil open and search for her himself. He must find Godhood. 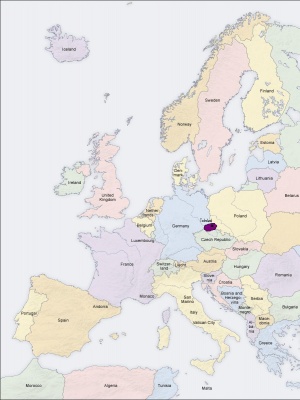 Since Johann's return to power, he has gone about stabilizing the economy of Todesland, restoring old buildings, instating healthcare, engaging in Trade with other countries, establishing embassies, secularizing Todesland, and, surprisingly, legalizing gay marriage. While his coup was indeed bloody and horrific, he seems to have nothing but good intentions for his people. The first few years were a huge fiasco in regards to the United Nations wanting to dispose of him, but Johann's combined tenacity and his people's general approval of him has discouraged any further action against his rule. Though separate from the European Union, Todesland seems to be getting along well, especially since his construction of War Walls around Todesland.

(Johann Grimm was inspired by three characters: Dr. Doom, Red Skull and Magneto. Dr. Doom because of his ability to blend magic and technology, Red Skull due to his ruthlessness and terrorists connections, and Magneto because of the slight, tragic human edge given to him by the search for his love.)