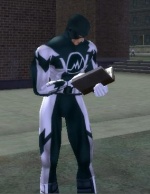 While Roger built a reputation with the Lifespike name as being a stable, grounded, patient and kind-hearted force that was into gardening, the second Lifespike isn't nearly as gentle. Since the discovery of his older brother and his murder, Norman's life has been based on revenge. He's capable of all kinds of good qualities, but the vengeful poison always holds a cloud over his head. While he yearns to track down the assassin Vile Toxin and outright kill him with no intention of using any form of legal method to stop him, he delights in taking down other assassin-types in the meantime. There is no type of criminal that he hates more than the "hit-men" type shithead, and he will actively hunt these hunters. As an investigator he is very inquisitive, sharp, conscientious, objective, patient and evidence-driven, leaving little room in his life for "beliefs" that have no evidence to back them up. As a human being Norman is passionate, emotional, secretive, brooding and a little controlling. He is loyal to his allies, but doesn't take kindly to senseless or greedy betrayals and doesn't forgive easily.

Life-Force Manipulation - Norman's mutation involves the direct manipulation of life-force energy. He is capable of absorbing, storing and transferring this energy between any living organisms within his proximity, or more prominently via physical contact. Depending on the effected organisms and targets, that act of having life-force energy absorbed plagues them with varying afflictions ranging from physical or mental disorientation and fatigue, to the weakening of powers and abilities, decay, comatose and eventually even death. On the opposite end of the spectrum, Lifespike is also very capable of empowering himself or others with an abundance of stored, transferred or 'pushed' life-force energy, resulting in accelerated regeneration and recovery, ridding of illnesses and afflictions, enhancing physical or mental prowess and even boosting the superhuman powers of metahumans. Visually the act of absorbing or transferring life-force energy can be witnessed as white 'entrails'. To those who can perceive such a phenomena, Norman appears to have a twice the amount of life-force compared to the average human being of his sex, age and physical health.

Life-Force Projection - Unlike the first Lifespike, Norman also has the ability to convert the life-force he's absorbed and project it through concussive blasts or waves. This depletes his life-force reserves faster than any other application however, and must be used wisely or when there is an abundance of energy available to 'recharge' himself.

Street Fighting - Lifespike possesses training in various street fighting techniques, coached by a former ally during the start of his heroing career. He uses this knowledge to compliment the nature of his mutant abilities when the situation calls for it.

Sleuthing - Masked or unmasked, Norman is a private detective by trade, and though young shows promise in being a talented sleuth and investigator.

Protective Wear - Lifespike's heroic costume possesses bullet-proof and heat resistant properties to protect him while on the job.

Life-Force Limitations - While his powers can prevent or drastically lower the chances of mortality for himself and others, he is unable to literally revive someone or something that is always deceased. In addition, as mentioned prior the amount of life-force energy he can contain within himself and utilize at will isn't infinite, especially when there is no energy source to replenish from.

Vengeance - A quality that should never rule anyone's life, the entire reason Norman came into the investigative and heroic linesof work he's in is due to this very quality. It's very possible to invoke the aggression inside of him, and to help with his emotional problems, he attends anger management once a week just to make sure he doesn't fall over the edge.