"I'm a soldier, meaning that I am both the defendant and the judge..."

Martel is a woman very clearly divided between business and pleasure. On the battlefield she is calm, precise, and brutally efficient. Her techniques are sharp, violent and extreme - like most Calibre operatives, she seeks mainly to achieve her objectives as quickly as possibly, and her objectives ususally involve ending somebody. As the senior member of Calibre, she takes a practical but protective attitude toward her soldiers, most of whom she has trained as well as commanded.

When professionalism is no longer called for, Martel's personality suddenly has room to move. More "one of the boys" than ever, she's a laidback, rather irresponsible hedonist who enjoys sports, drinking and strip clubs. She's friendly and easy to get along with, as long as you don't mind her very active (if dirty) sense of humour. She's also a great deal more lawless - on more than one occassion, she has been known to pinch the Sun Tzu's "lifeboats" to take a call girl out to international waters.

"Save your tears for the day

When our pain is far behind

On your feet, come with me

Martel's history is vague, not due to deliberate obfuscation but due to the fact that she's been a part of Calibre longer than any other operative - with the exception of the group's heavily-classified leader. Given that her prowess suggests experience beyond the years since Calibre was reformed - it has only been active again since the first Rikti invasion, after all - her fellow agents have theorized that she has been a soldier much longer than she has been in Calibre.

In her original capacity Martel was a covert ops specialist, a tough-but-ordinary human whose equipment, training and possible cybernetics (nobody is sure of that last one) allowed her to compete with metahumans. Her role changed dramatically during the Subradian Incident, where she rather unintentionally merged with Halo, a Kheldian who was captured by the Council and in turn stolen by the Rikti cell from which Calibre rescued him. Separated from the rest of her unit during the extraction, Martel saw no way to keep the incapacitated Kheld safe except to protect him with her own body. Thus Halo merged with her - though he remains more a passenger than a symbiote.

"You're seriously suggesting that killing the senator falls under small crimes?"

"He was a small man."
- Martel taking advatange of Calibre's autonomy

Martel is one of the longest-standing recruits of Calibre, at least since it was reformed. She was primarily an infiltrator or "Black Raven" before becoming a Peacebringer; now she finds herself far more suitable to a "White" - or high-visibility - role. As their Field Commander and the most experienced member still on field duty, Martel usually serves as a leader on any given mission, giving her the role of a "White Wolf".

Martel is also, of course, affiliated with Halo. Despite being unfathomably old, even by Kheldian standards, Halo is a somewhat naive pacifist, who wants only to avoid further conflict. Rather than transforming his human host like most Peacebringers, Halo prefers to transfer as much of his energy as possible to Martel's native form. Even when they move into Dwarf stance, it's mostly a case of Halo tossing Martel the reins and hiding behind the couch. 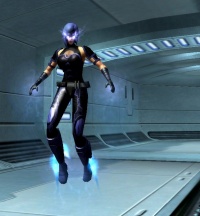 By and large, Martel demonstrates most of the energy-based powers that are expected from a Peacebringer-class Kheldian. She can use kinetic force to create short-range blasts, augment her melee attacks, deflect incoming blows and propel herself in relation to other surfaces. She differs from the norm by not having any true alternate forms, however. The ghostly shapes of Halo's former hosts can sometimes be seen around Martel as she fights - particularly when she draws deeply upon his reserves - but they are only illusions, with no strength or solidity.

Before Halo, Martel was an extensively-trained infiltrator and an expert in close-quarters, unarmed combat - abilities that still form the foundation of her combat style. She is also a seasoned soldier and leader, who is entrusted with the implementation of most of Calibre's plans. She is involved in strategy also, though more in the capacity of an adviser; she speaks mostly for her agents and their abilities, and leaves the bulk of the planning to true strategists like Warbinder.

As a Quebec native, Martel is fluent in both French and English. She also speaks passable Spanish, much to the surprise of her friends; she claims to, "speak South-of-the-Border", double-entendré probably intended.

Like most Calibre operatives, Martel has a vast and varied collection of tools, gadgets, weapons and accessories supplied by the organisation. She is most commonly seen using jet propulsion boots, light body armour and targeting HUD, and is constantly linked to the Calibre communications network by virtue of a cybernetic mod. She has access to the group's base and resources, teleporters and inventions, and is usually carrying with her an access card to the Sun Tzu's lifeboat (if she hasn't lost it in a recent poker match).

Due to Halo's presence, Martel is subject to the "Void" and quantum weaponry that trouble all Kheldians. Beyond this, her only real limitation is that she is a generalist; for any single specific task, there is probably a specialist amongst Calibre's ranks who would handle it better than Martel. Instead, she usually carries a number of more minor tasks, serves as a fallback "plan B", or covers the specialists while they get their jobs done.