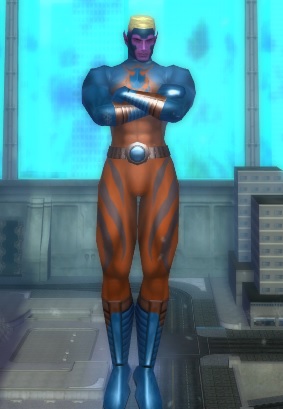 Dzi'jzakize was part of a sentient race of what are known to Earth as 'Syclimen', a highly advanced people that populate the planet known as Biesta-26 in the Andromeda galaxy. Though not without their antagonistic numbers, the majority of their nations place high value in progressive policies and environment sustainability.

The most advanced and successful of their nations have gone through revolutions and socialist utopias that broke the shady history of the older days of extreme wealth inequality. In modern day, these nations have become the equivalent of unitary parliamentaries and democratic republics that utilize various social systems that maximize overall quality of life. Dzi wasn't one of the lucky ones.

He was a soft-hearted Sycliman born in a fascist nation, who had to give up his interests and desires in the arts to choose a lesser of two evils; enlisting in the national Protectorate Force to avoid being conscripted into the intergalactic military, who have been at odds with most of the habitable moons surrounding Biesta-26. Despite the circumstances, Dzi soon grew into a capable adult, and earned a reputation of being genuinely level-headed and kind, even in the face of tough decisions and crooked peers.

He was keen in starting a family early, joining a childhood sweetheart in union and later raising two daughters with every intention of immigrating to a more stable nation. Those plans were placed completely on hold soon following however, as members of the Protectorate Force were called to assist the military being overwhelmed by the S'Trian race in their invasion of Moon 2, which their nation has claimed for decades despite the moons own natives and the diplomatic pleas of stable nations.

Days after Dzi's arrival he would grow absolutely disillusioned in their wrong doings, which he made quite clear. He was soon labeled a traitor, and his relationships with passed friends crumbled. With no true allies on the battlefield, Dzi didn't receive help when his squadron was ambushed by S'Trian soldiers attempting to defend their home world. The sycliman was left to die alone with a hole through his chest after being struck down by a laser-oriented weapon.

The S'Trians were not the only sentient race that existed on Moon 2, and while they were at war with the Syclimen, the elusive energy beings known to the S'Trians as "the Heiti", surfaced regularly to witness the decades of fighting, but never interfering. Little was known about them, and only speculation existed regarding their level of sentience, or rumours of their ability to 'possess' the bodies of physical beings.

One such Heit took notice of Dzi when he became separated from the rest of his team and wandered to a cave to make his last good-bye message to his family knowing he didn't have much time left. Just as Dzi laid on the ground, the Heit approached him and graced his skin with its warmth, providing comfort before his life was lost. With the body free, it immediately possessed it; filling it with its own essence.

The body sprang back to life, and remained in the cave for days to figure out its new perception of physicality. It explored it's senses and viewed Dzi's memories. It fused the greatest parts or itself with the greatest parts of the sycliman. Eventually, a few soldiers of the fascist nation found their way to the cave that Dzi died in, tracing his last steps in search of the missing peer and expecting only to identify his deceased body.

They were shocked to find 'Dzi' there in the cave, staring at them with a look in his eyes that was foreign. Just as they called out to him, the possessed body rose his hands up and drained the heat from their bodies, freezing them and instantly killing them to avenge the memory of their turning against the old Dzi. The new Dzi had a grin on his face, the likes that were never seen before. Once 'he' took control of his abilities, he quickly traveled back to the Protectorate base on his home moon that he remembered from his newfound memories and destroyed everything in sight.

Afterward, he made his way back to Biesta-26 and disappeared for perceived months. It was during this time that the Heit-turned-Sycliman educated himself on everything he could get his hands on, and through his studies decided that his next destination would be the planet Terra, or 'Earth', in the Milky Way galaxy, for his own education, amusement, and interests. He took advantage of the fact that a Sycliman had already made contact with authorities of Earth once, and followed the same course after hijacking a light speed ship.

Dzi'jzakize was known to those in his life to be a very respectable, kind and trustworthy individual. He bared all the qualities one in his line of work on the Protectorate Force should have in theory, despite it's known corruption. He started a family early in adulthood, and worked hard to support them as best he could.

The Heiti that stole the body and identity of the dying Sycliman is a much more complicated being, especially considering it's transition into a definite physical form. 'He' has been able to further develop a personality, ego, psyche, etc. and explore his new existence by interacting with the world in a way he couldn't previously accomplish. Maxwell Demon is highly curious, values knowledge, facts and statistics.

He thoroughly enjoys drama, and isn't above belittling inferiors, nor manipulating others in a variety of ways to suit his own whims and fancies. There is a unique element of opened-mindedness that he expresses when least expected which can draw in those on the fringe of society, though the sly little smirk plastered on his face can sometimes have the opposite effect when it's clear he's playing games.

Thermokinesis - By controlling the kinetic energy between particles, Maxwell Demon has the ability to manipulate thermal radiation at will, enabling him to alter the temperature of specific objects, or span across localized areas of effect. This provides him with a versatile range of capabilities: inciting combustion, freezing targets by drawing out heat, de-oxygenating closed areas, or even use warmth for therapeutic and beneficial purposes. His control appears to be advanced enough when effecting specific objects or minuscule spaces that he can ensure thermal energy is directly pulled from the air around them opposed from within - sparing any fatality when it's not warranted or necessary. Through increased and sustained concentration, he has the capability of expanding his scope of control to substantial amounts, a state which enables him to influence localized weather patterns.

Thermodynamic Manipulation - Since the Heit's possession of the Syclicman and his arrival to Earth, the magnitude of Maxwell Demon's powers, and his understanding of such, have increasingly ramped up to unforeseen levels of power and manipulation of advanced thermodynamic phenomena. It is now understood that his abilities have influence at an atomic level, opposed to a molecular one. Through extremely dedicated focus, he is able to directly influence systems of entropy; achieving states of absolute zero or absolute hot. He is also capable of breaking the second law of thermodynamics for extended periods of time. Though not proven, it is now theorized more than ever that he possesses omega-level potential.

Thermokinetic Sensory - Not only does Maxwell Demon possess 'heat vision', but his entire body is hyper-thermoceptive, which enables him to detect deviations of temperature as little as a tenth of a degree (0.10).

Sycliman Physiology - The Sycliman body that Maxwell Demon possessed in order to exist as a physical, tangible form boasts many superiorities over human beings due to the nature of their planet's, Biesta-26, atmosphere, environment and gravitational pull. His overall strength, stamina, durability, agility, recovery and senses of hearing, sight and smell surpass peak possible human equivalents.

Flight - Maxwell has the ability to self-levitate and propel himself into flight, utilizing a combination of his true form underneath the shell and thermodynamics.

Mental Resistance - The nature of Maxwell Demon's true form underneath the 'shell' of the body he possesses makes it more difficult than usual to mentally focus upon his conscience, ego, psyche, etc as it is not in one specific location, but constantly shifting around.

True Form - Beyond the guise of the Sycliman Maxwell possessed is the being's true Heit form; an ethereal-like, conscience, intelligent being that resembles a plasmic 'ball' or 'cloud' that is constantly exciting the atomic particles in and around itself, radiating warmth in varying degrees. Without a solid form to possess, he is unable to properly interact with the physical world in traditional (and desired) means.

Linguist - Maxwell Demon demonstrates the ability to learn new languages in a relatively short amount of time. Besides the Heit language of radiating specific temperatures in specific patterns, he has also picked up syclicommon from Biesta-26, and since his arrival upon Earth has been learning English, French and Spanish.