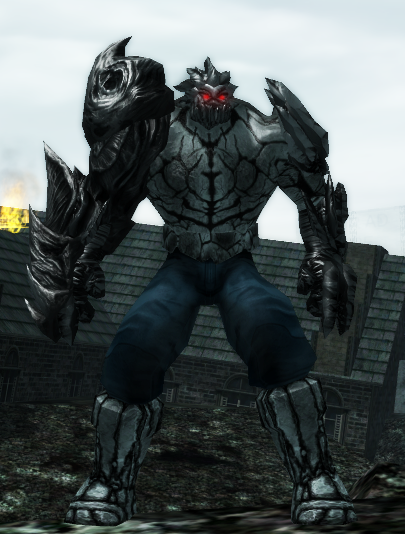 The former Jack Branson. Born a bright and friendly child, Jack was bullied relentlessly until meeting Cliff Parker. They became best friends. Throughout childhood, adolescence and into adulthood, the two eventually went on to partner up as construction workers.

One day, Jack uncovered numerous barrels of toxic chemicals on their job site, clear evidence of illegal dumping. Jack reported the dumping to his foreman but was dismayed when he discovered he'd been bribed by Obsidian International to keep quiet on the matter. He was even further appalled find out Cliff had taken the bribe as well.

Jack went to meet his foreman and a representative from Obsidian the night after to settle the matter, but realized all too late that it was a trap set up by his foreman and a few of their crew. To keep him quiet they shot him and dumped his body into a ravine. On the verge of death and buried underneath tons of rubble atop pools of toxic chemicals, Jack's body changed. Eventually summoning the strength to dig himself out of his would-be grave, he was horrified at his newfound appearance. He was now a hulking brute, with his skin the texture of stone.

Who he thought was his best friend had become corrupt and abandoned him to die. He looked like a monster. His parents were disgusted at the sight of him.

But he also discovered he now possessed the ability to generate powerful seismic waves from his hands, creating highly destructive quakes. Not only that but he found he'd gained super strength and durability as well. He could lift cars above his head and his granite-like skin was bulletproof.

All his life he'd followed the rules and tried to be a good guy. But that had being nice ever done for him?

He was done being bullied.