The Upper Room is the name used by Servant 12 to refer to the hidden base of the Millennium Paladins. Having undergone many separate redesigns since it was constructed, it still remains smaller and simpler than the bases of some other supergroups that have been established for as long as the Paladins have. Despite this fact, it remains a fully functional rallying point and meeting place for the myriad Paladins and their allies. 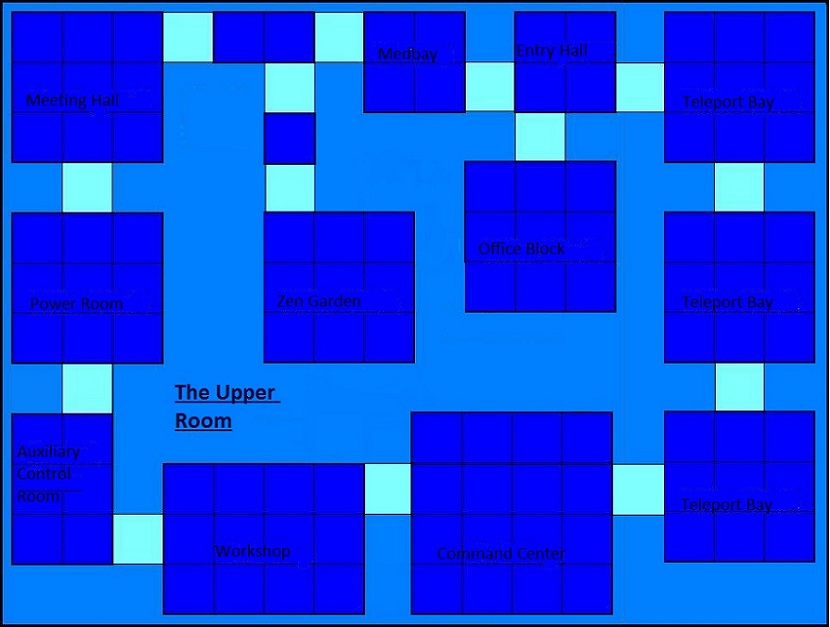 The true location of The Upper Room is known only to Servant 12, the officers of the Millennium Paladins, and a select few trusted allies outside of the group. It is believed to be located somewhere beneath Galaxy City; in fact, it is actually high above ground, hidden on a secret floor of a high-rise commercial office building owned and operated by Tannan Industries.

The Upper Room contains no doors, elevators, windows, or stairwells; it can be accessed only through the city-wide teleportation network. The base's current layout is roughly rectangular; most of the base's rooms are connected by several hallways that wind around the perimeter of the facility, giving visitors bi-linear access to each workspace. A few rooms are accessed from secondary halls that connect to the main accessways, but overall, there is no direct interconnectivity between the front and back of the base. Although the more vital areas can only be reached by traversing the entire length of the base, the small size and compactness of the complex, combined with the overall design, successfully provides quick and easy access to every facility.

The base is well-stocked to meet all of the Paladins' needs. It includes a top of the line industrial manufacturing facility, administrative office space for the group leaders, a fully-functional security monitoring center, and a sophisticated command and control center, complete with a massive and powerful mainframe supercomputer. There are also multiple conference and lounge spaces, a small but comprehensive medical bay, and an extensive teleportation network that provides access to all but a handful of Paragon City's many zones.

Since its initial construction, the Upper Room has been periodically upgraded and expanded. Its present-day layout is a far cry from its earliest incarnations. When it was first built, it was little more than a small collection of fairly cramped rooms. Today, most of its chambers are much larger and contain far greater levels of complexity, both in their design and in the variety of equipment installed therein.

Serving as the only ingress/egress point from the base, the Entry Foyer also serves as a makeshift trophy room. Several glass display cases contain an assortment of weapons collected from various foes that the Paladins have defeated over the years. Located on the north side of the complex, it provides direct access to the base teleport bays, medical facilities, and administrative facilities.

One of the three newest rooms in the base, the Office Block was designed and built by Kuragari Umbra at Servant 12's urging, believing that the most diligent and dedicated of the group's leaders deserved their own personal space within the Upper Room. The well-decorated, wood-paneled Office Block is divided into two stories. The downstairs is divided into six individual office compartments, each of which can be furnished and decorated according to its owner's specifications. The upstairs floor contains an impressive library and museum, along with a small kitchen. There are literally thousands of books stored here, as well as dozens of artifacts collected from the many missions that the Millennium Paladins have performed over the course of years.

The small Medical Lab is directly adjacent to the Entry Foyer, allowing resuscitated heroes to return directly to the action. Of all of the original rooms in the base, it has probably been upgraded the most. Once little more than a threadbare chamber housing a few medical reclamators, it was significantly upgraded by Kuragari Umbra as one of his many base renovation projects. While it still contains only two basic reclamators, its active medical equipment has been expanded with the addition of an Auto-Doc. The rest of the available space has been utilized to include an emergency stasis chamber, a diagnostic chamber equipped with high-end medical scanners, a wall-mounted diagnostic display, and an expanded medical laboratory. It is currently well-equipped for medical and biological research, a fact that has proved useful in several missions.

The newest room in the base, what Aegirian Templar refers to as the 'Zen Garden', is located just off the main northern hallway between the Medical Lab and the Meeting Hall. Like the new Office Block and Control Center, the Zen Garden was part of Servant 12's proposed base overhaul, but it was not constructed until the Templar decided to take action on the idea. For many months, the space now occupied by the Garden lay empty and unused, and Templar, not wanting to have to expand the base unnecessarily, tried to figure out a way to utilize it. By constructing a new hallway to link the Garden to the existing hallway, he managed to fit the room into the space without having to radically redesign the base layout.

The Garden is decorated in a mild Japanese style and contains no modern technology whatsoever, apart from the lights and a few supergroup beacons. The plants and trees are the most prominent features of the room, giving it a pleasant woodland smell. A few simple cots erected around the room's periphery allow visitors to engage in peaceful meditation, far from any noise or business that may occupy other portions of the base. An old-fashioned wooden table and benches allow the Garden to be used as a secondary conference area for casual meetings that may not require the officious atmosphere of the formal Meeting Hall.

One of the longest-established rooms in the base, and one of the most important, the Meeting Hall is where Servant 12 rallies his Paladins for battle. Located just beyond the Medical Lab in the base's northwest corner, it has historically been used to hold ceremonies and conduct meetings and briefings within the group, as well as with members of allied supergroups. The room is also where Servant 12 displays the recovered portions of the Eleazar Prophecy, which he uses in order to discern more about the nature of the Unknown Certainty. The Meeting Hall, like the Entry Foyer, is one of the more static rooms in the base and rarely changes. The only tangible upgrade in recent years has been the addition of a corner fireplace and a small bar, creating an impromptu lounge where the Paladins can take much-needed breaks in between difficult missions.

Positioned directly beyond the Meeting Hall, the Generator Room is one of the original areas of the base; of those foundation rooms, it has gone through the most radical changes. Originally, it functioned solely as the base's generator room, supplying the facility's modest power needs with a single bank of generators, but otherwise empty. Later, it was upgraded to include a small one-story, roofless trio of close-knit offices. It was then upgraded further to a large, solid two-story structure; the first floor contained the same three basic offices and a small utility room, and the second story included a conference room and a small theater with a widescreen video monitor. The same power generators still occupied the same spot alongside the eastern wall, hidden from view by a high retaining wall.

When Kuragari Umbra completed construction on the brand-new Office Block directly across from the Entry Foyer, the Generator room reverted to its original function. The now-expanded base had a much larger power requirement, and so the Generator Room was simplified to provide pure energy production. It now consists of a single accessway leading from the Meeting Hall to the Databank Room, flanked by high retaining walls. Behind the walls, two banks of generators, breakers, and capacitors generate the power needed to keep the Upper Room functioning. With the constant buzzing and humming of the generators, it is always the noisiest room in the base.

Located in the southwest corner of the base, this room was originally the base's main Control Room. The centerpiece of this facility was an impressive mainframe supercomputer and databank system that was designed and built by Kuragari Umbra. For many years, it was used for base control, data storage, and monitor duty. Servant 12 was even able to acquire a rare and highly prized item - a Pillar of Ice and Flame - from the Menders of Ouroboros, and installed it in this room.

When Kuragari designed the new Command and Control Center, the main computer in this room was dismantled, its systems incorporated into the new mainframe that Kuragari subsequently constructed. Now only a collection of databank servers and the Pillar remain. A series of data entry stations in one corner allow Paladins to input their mission logs and tactical data into the system for further reference and analysis, but none of the main base controls are accessible from this room any longer. Its only current functions are as a repository for intelligence gathered by Paladins in the field, and as an access point to the Menders' Flashback time-travel system.

Despite having been re-arranged on many occasions, the Upper Room's extensive manufacturing center remains the well-equipped cornerstone of the base. Featuring numerous electronic workstations, robotic fabricators, industrial workbenches, storage racks, and 3-D scanners, it contains everything the Millennium Paladins need to manufacture Inspirations, power Enhancements, base facilities and equipment, and even weapons and gear. Servant 12 can often be found here working on new refinements for his battlesuit and weapons systems, and many of the group's other members spend a great deal of their off-patrol time here as well.

Constructed at the same time as the new Office Block, the massive Command and Control Center takes the place of the old Control Room. The supercomputer housed in this facility dwarfs the older mainframe, and possesses enough memory and raw processing power to run a small self-contained city. From power management and systems control to multi-spectral analysis and long-range monitoring duty, there is no task that this enormous mainframe cannot handle.

The C&C is also equipped with a full-scale security monitoring station that Kuragari built along the north wall. Equipped with biometric scanners and alarm systems, the station allows a number of base personnel to monitor the facilities at all times. The security station also controls the defensive emplacements that were put in place around the mainframe - just in case someone without proper clearance tries to access the base's primary systems.

Originally, the base's teleporters linked the Entry Foyer at the northeast end with the Workshop at the south end. With the construction of the new facilities resulting in an expansion of the base layout, the teleport bays were re-organized and expanded. Now forming a straight hallway on the eastern side of the Upper Room, the Teleport Bays provide quick and easy access from the entrance and offices to the new Control Center. Nine PortalCorp-manufactured telepads provide instant access to eighteen of Paragon City's zones. These include all of the main inhabited areas, including Peregrine Island, as well as many of the critical hazard areas - particularly the Rikti War Zone.